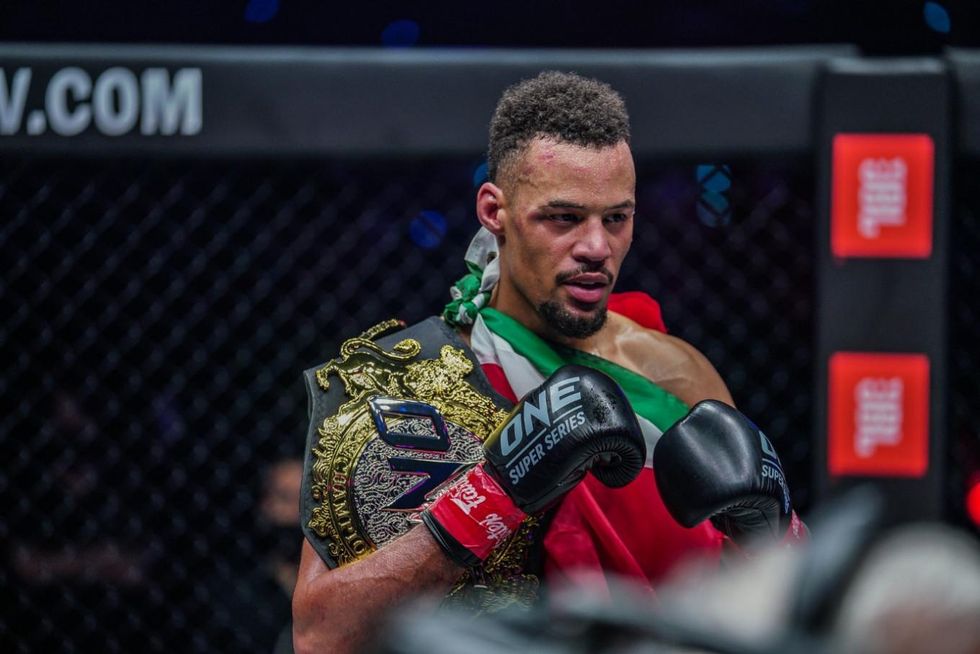 Regian Eersel already holds the ONE Lightweight Kickboxing World Championship on his shoulder, and at ONE on Prime Video 3: Lineker vs. Andrade, he hopes to add the inaugural ONE Lightweight Muay Thai World Title to his collection. To do so, he will have to defeat Sinsamut Klinmee on Friday, October 21, when ONE Championship returns to Axiata Arena in Kuala Lumpur.

The bout will mark the first time Eersel competes in Muay Thai in several years, and this time he will lace up the four-ounce gloves against an exciting knockout artist. “The Immortal” embraces the challenge of switching from kickboxing to Muay Thai but admits he feels the nerves of the massive co-main event matchup.

“I know I’m a little bit nervous, but they are healthy nerves because, yeah, I haven’t fought Muay Thai for years. So now I am making the transition from kickboxing to MMA because now I am training with small gloves, doing elbows, and clinching. You know what? That will be good for me. It keeps me sharp. I am fighting Muay Thai with the elbows and the small gloves. And I’m fighting the Thai guy. So I must be super sharp,” said Eersel.

Eersel has ascended to the top of the sport during his unbeaten streak, and his name appears on many pound-for-pound lists. The expectations grow with each passing performance, but the Surinamese striker does not let that weight on his shoulders. Eersel simply puts the thought of keeping his undefeated streak alive out of his head and competes with the man standing across the Circle from him.

“I don’t feel pressure. Just because I have been able to do it for the last six years. And yeah, it motivates me a little bit. Yeah, I’m undefeated for six years. Not many fighters are undefeated in six years, so yeah, but I’m not thinking about that when I go inside of the Circle. I’m just thinking that I have to win. I have to beat the guy in front of me,” said Eersel.

The title tilt at ONE on Prime Video 3 could mark a historic moment for “The Immortal.” He has the chance to become a two-sport champion and bolster the claim of being the best pound-for-pound striker on the planet.

But Eersel puts more meaning to the achievement than just his own legacy. The reigning kickboxing king also wants to do this for his home country.

“I feel like I am writing history if I also win the Muay Thai world title. It will be so important for my country Suriname, for the people, and for my team. This is history-making, and if I am the first one to make this happen, then this is for the history books,” said “The Immortal.”

Knowing how Klinmee has finished his two bouts inside the Circle already, Eersel knows he will have to deal with a striker who seeks an emphatic end. That certainly sparks his interest, as “The Immortal” plans to have the same strategy to win gold and collect his check. It makes for one of the most interesting and explosive matches on the card.

“We’re going to play fire with fire. And we will see which one of us at the end is still burning,” said Eersel.

Ahead of ONE Lightweight Kickboxing World Champion Regian Eersel’s main event showdown against German striking ace Arian Sadikovic on 22 April, relive “The I…