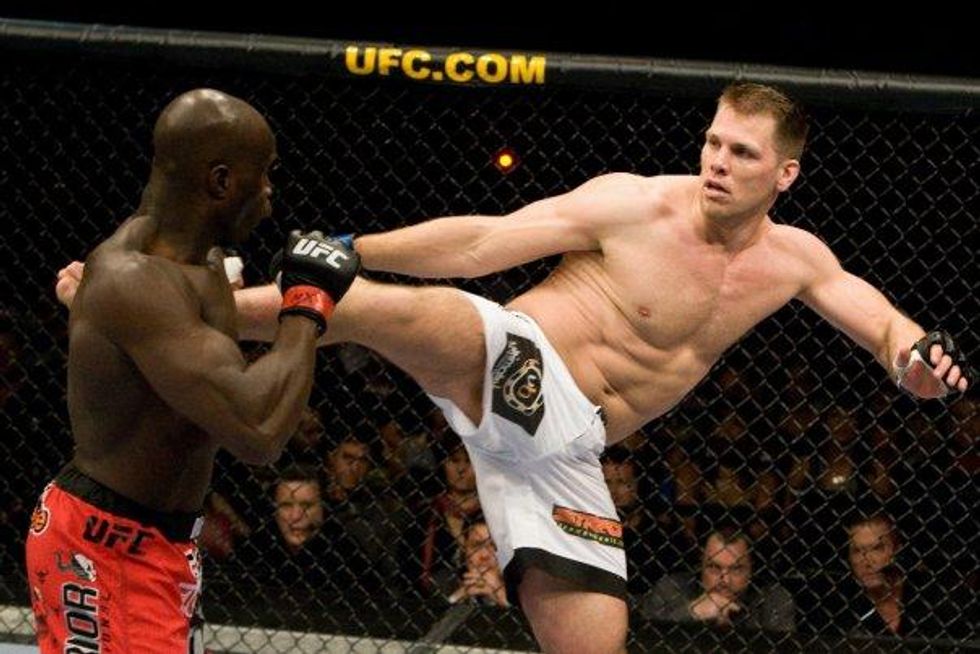 Of all the kickboxing competitors and many crossing over from other disciplines and stepping into the ring, it seems one group holds a distinct advantage in the heavyweight division of this striking sport. What would lead us to this conclusion? Well, in 26 of the last 29 years of kickboxing in the largest and most well-known promotions (K-1 & Glory), a Dutchman has held the Heavyweight Kickboxing Title.

Let’s see if we can get to the bottom of why this is the case.

IL With us today is the owner of Dynamix MMA in Los Angeles and UFC veteran, Dutch Kickboxing expert Antoni Hardonk to share his opinion on why this impressive record stands. But before we do, Antoni would you please tell us a little bit about yourself.

AH Thanks for having me. I grew up playing sports with a special interest in marital arts. The popular schools at the time were doing kickboxing, and I fell in love. As a matter of fact, I competed as an amateur and later in several professional promotions, ultimately leading me to K-1 well before my time in the UFC.

IL It’s no secret that there is occasionally friction between MMA athletes and traditional martial arts practitioners. One thing that caught my eye in your gym is your karate gi and black belt. So, it seems that despite having competed in the UFC and running a successful MMA gym, you have roots in the traditional arts?

AH I started Kickboxing first, but all my coaches had backgrounds in Kyokushin. It was intertwined. The Kyokushin culture was in all we did. We didn’t train in a gi, but the spirit, edict, philosophy, and terminology were all there. Once I was well versed in Kickboxing, I wanted to take it a bit further, and that’s when I put the gi on and started training outside of the basic competition rules. That’s when I got into Judo as well as western boxing, Savate and Japanese jiu-jitsu. I wanted to go deeper.

IL I see that you’re an expert in the field and a true martial artist as you have worked to obtain knowledge from multiple disciplines. So, with all your experience, what are some of the training philosophies that give Dutch kickboxers a potential advantage over others? Or what are some main differences in training techniques?

AH First, it’s important to note the difference between “system” and “preparation.” When I say “system”, I’m referring to the technical and tactical approach to fighting. For example, a punch, a kick, footwork etcetera. When I say “preparation”, I’m talking about how we practice our techniques and tactics. For example, we use a lot of partner drills. As a matter of fact, I’ve even heard of some gyms referring to partner drills as “Holland” or “Dutch” drills.

IL That preparation approach sounds very much like the traditional arts. So, how would you say that Dutch kickboxers train as compared to say western boxers or Muay Thai fighters?

AH Well, when you look at boxers or Muay Thai fighters in the gym, they are almost always training as individuals. They’re frequently told to go work on the heavy bag, or the run mitt drills with an instructor, one-on-one. They’re jumping rope, shadow boxing. Again, almost all of which is done with an individual focus. Now, that’s where we differ in our kickboxing training. We do a lot of group work. Partners are almost always paired up to work through the drills of the day. We have many different types of drills. For example, we have drills that focus specifically on movements, clench and tactics just to name a few. But, unlike others, they are all done in a group setting. This group approach is a residual effect and left over from the traditional arts. But that’s not to take away from its effectiveness. We still see this type of training approach in traditional martial arts schools across the world and in the finest military and polices operations such as the Navy SEALS and SWAT teams.

IL So I better understand why you train the way you do, what gives it a competitive advantage in your opinion?

AH Well when you work with a partner, you quickly learn what works. You’re constantly learning to read an opponent. Compared to when you train on a heavy bag, for instance, there is limited feedback. With a partner you get real-time feedback and see what has a chance of helping you succeed in the ring. But don’t misunderstand me, I’m not against training on the bag. It is just limited. The bag is great for power and conditioning.

IL If I’m understanding you correctly, you feel that the tools others use have their place, but you think that time is better spent on partner work. What time allocation percentages would you say the Dutch observe?

AH I would say probably 90% partner work and 10% to individual work. But every gym has their own approach, so I can’t speak for every Dutch kickboxing school across the world. This is just what I’ve seen from my years training. Also, I want to quickly clear up a misconception. Some think that all Dutch kickboxing schools are “hard sparring” all the time. This is also something that varies from school to school.

A prime example of this is from my years as Ernesto Hoost’s training partner. Not once did we injure each other. In that setting, control was highly respected. I say that just to clarify that the intensity of sparring depends on the school.

IL Very interesting! I’ve really enjoyed our discussion thus far and your explanation on some of what makes Dutch Kickboxing different.

AH Thanks, I’m glad to have the chance to share from my experience.

IL For those reading along, hopefully we’ve shed some light on the Dutch Kickboxing system and maybe even opened your eyes to some tools or thoughts that you can use to enhance your training methodology.

Be sure to check back soon for Part 2 when we finish our dig to get to the bottom of what makes Dutch Kickboxing so effective in the ring.