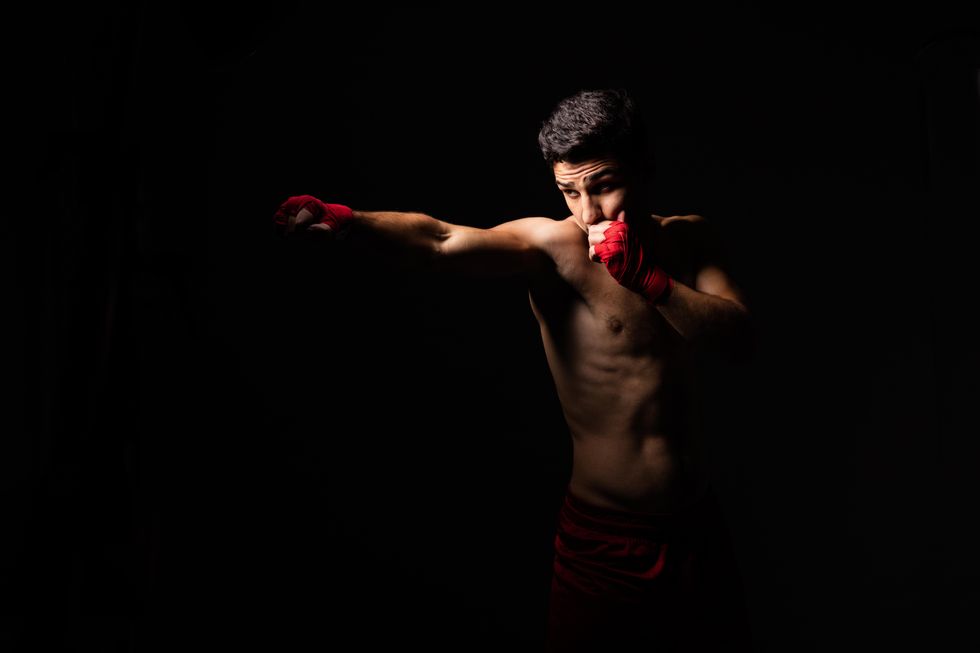 In Part 1 of “Conceptualizing Power Creation” we discussed the basic parameters of power generation, your body’s movement through the height, width, and depth planes. In Kenpo terms we refer to these power generators as marriage of gravity, rotational torque, and back-up mass respective. We then explored the roundhouse and front kick in detail in Part 2. Today, we will dig into how you can maximize power production in your punches. To do so, we will look at several punches, and from that, you’ll be able to extrapolate and apply the knowledge to any upper-limb strike.

When throwing a jab, there is rotation of the body which employs rotational torque through the width dimension to create power. This can be accomplished from the ground up as the fighter turns the front foot inward. However, the amount of rotation is limited because the hip and shoulder of the throwing hand is already near the target. This means that the punching hand shoulder may only get about 45-60 degrees of rotation depending upon the fighter’s stance (when looked at from above the body looking down). I will explain later how this relates to why the cross is typically a much stronger punch. Suffice to say, more rotation usually leads to greater power creation.

Another way in which power is made for the jab comes from a step forward with the lead foot as the punch is deployed. When this occurs, the hips and shoulders naturally engage in a degree of the rotational torque as described above. However, added to the equation is movement through the depth plane, resulting in adding power with back-up mass. As you can imagine, the addition of a small step forward with the jab has the ability to create a more significant impact. There are of course other footwork options, but these are a couple of the most common and should be sufficient to spark your exploration on how the body moves through space with the jab and how you can create the most desired effect.

The cross or reverse punch is very similar in its power creating parameters. As a linear punch, it harnesses power from both rotational torque and back-up mass. In the discussion above on the jab, I mentioned that the effect of rotational torque power creation was limited due to the range of rotational torque being limited to roughly 45-60 degrees. This is not the case for the cross. Because you are throwing the cross from the back hand, you have access to somewhere in the range of 120-160 degrees of rotation. That is a massive increase in which to boost the straight punch’s power. The rear foot can simply rotate, as the hips and trunk rotate toward the target generating incredible straight-line power.

You can also juice up the cross by taking a small step towards the target as the punch is thrown. You still lasso the power of rotational torque as the rotation of the trunk occurs, but you also add back-up mass to the equation. As you have probably already guessed, this combination leads to even greater power generation.

It should be noted that you may also be moving away from an opponent when throwing either the jab or cross. That said, when retreating and throwing either of these strikes, you will rely much more heavily on rotational torque as back-up mass is essentially removed from the power equation.

Unlike both the jab and the cross, the hook punch is circular in delivery. It also tends to target either side of the opponent instead of the front of their body. Because of these facts, the main power generator is rotational torque. The arm and hand become a clear extension of the rotating trunk. As the torso rotates, the fist is propelled along roughly the same arc, though extended from the body. The more speed of rotation in the body, the greater the velocity of the hand and consequently the larger the impact.

This is all obvious as we consider the hook. But take a moment to think of the potential lateral movement of your body when striking. For instance, as an orthodox boxer throws a lead hand hook, they can simultaneously step to their right. In essence they are moving their entire body in the same direction of the fist at its time of impact. Though this is not exactly mass behind the punch, I abstractly look at this as an application of the back-up mass principle used in the width plane. * The weight of the body is used to pull the punch through the target. This is not unlike how the Dutch Kickboxer uses the weight of the body and resulting momentum from liner movement to power-up the circular roundhouse kick to push it through the body. (Revisit Part 2 for details)

I hope, at this point, you’ve fully grasped the concepts of rotational torque and back-up mass. However, one of the power creators that hasn’t receive much attention is marriage of gravity. I won’t belabor the entirety of power creation in the overhand right (orthodox stance). I encourage you to consider the fist’s movement and the body’s overall action. When doing so, you’ll probably note that the torso is in a downward trajectory at the time of impact. That said, marriage of gravity is also being added as a power multiplier to the much-used rotational torque and back-up mass.This makes for an incredibly powerful strike as the three major power generating movements are combined into one action.

No amount of talking will magically maximize the power of your strikes. However, understanding how power is generated gives you the tools analyze each of your techniques. You can begin putting this knowledge into practice today. And should you desire to tune-up your striking techniques, now you have the know-how to make the most impact.