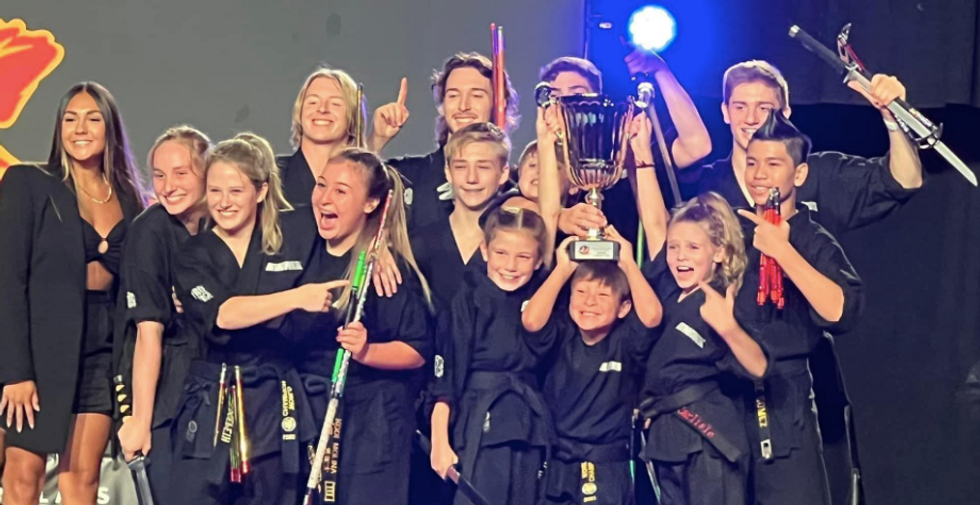 Team Competitive Edge head coaches Jackson Rudolph, Reid, Cole, and Jake Presley have added six new martial artists to the roster of their national competition team. The team has garnered a reputation as one of the best teams in the sport when it comes to developing talent, evidenced by the results of their members and the movement of four athletes to Team Paul Mitchell in April of this year. These pick ups feature various age ranges and competitive specialties, increasing the diversity and versatility of an already well-rounded group. The athletes soon to be seen competing across the country in a Competitive Edge uniform are as follows:

Olivia Cano is a 10-year-old Taekwondo stylist from McAllen, Texas who earned her black belt at Team Tiger Martial Arts. As an underbelt in 2019, she earned her spot on stage in the U.S. Open Night of Victory for CMX forms and weapons. She is a bo specialist who competes in CMX and traditional forms and weapons, coming off of an impressive win in the traditional weapons division at the Diamond Nationals. Her personal coaches include Jackson and Gabrielle Rudolph, Ryker Weaver, Marco Villanueva, Clarissa Villanueva, Christian Elizondo, and Competitive Edge teammate Kodi Molina.

Jackson is 14 years old and has 10 years of martial arts experience training under his father, Aaron Hensley. He has two black belts, one through the Chuck Norris System and another through Premier Martial Arts. As a member of the Chuck Norris System, he once won a coveted Norris Cup on the same day as Competitive Edge alumni Ben Jones and co-founder Jackson Rudolph. He has made it to the 14-17 CMX weapons grand championship multiple times this season and has been impressive with his kama routine in each of those appearances. He sharpens his kama skills with personal coach Alex Mancillas, and his inspirations include Matt Emig, Mackensi Emory, and Reid Presley.

Harold is a 12-year-old Kaju Bujutsu Kwai black belt who is from New York City but now resides in Greenville, South Carolina. In his seven years of martial arts training, he has won four NAKSA world championships along with numerous national and regional titles. He is known for his bo skills and is capable of insane levels of difficulty in the CMX weapons divisions. He also trains in traditional karate through the Kata Mastery program with the likes of Jarrett Leiker and Mason Stowell.

Twelve-year-old Lia grew up in Hawai’i, Utah, and Japan where she is now based at different times of the year. She is a relatively new face to the sport karate community, but she is already making waves in the competitive scene. In her first full season on the NASKA world tour, she has won the traditional weapons and forms divisions multiple times and is the top-ranked competitor in her age group for traditional forms. Her fantastic traditional foundation is attributed to the expertise of Sensei Sunao Miyaguni from the Japan Karate Federation Goju-Kai, Syoutokukan. For her traditional and creative bo forms, she trains under Jackson Rudolph.

Malachi is another somewhat new face to the national sport karate scene, but he has impressed many in his first few events. The 10-year-old from Fraser, Michigan started his martial arts journey four years ago at Professional Karate Schools of America (PKSA), where he was on their national demonstration team that traveled to Delhi, India to teach young women and children self-defense. He currently trains at PKSA under Carl Walton, and upon discovering his love of point fighting he sought additional training under Konnor and Korey Kuppe of Macomb Martial Arts. The dedicated young man also does online training with Bailey Murphy and Tyreeke Saint through their Point Fighting Professionals program, and has taken private lessons from several members of Team Paul Mitchell. Like some of the other new additions to Competitive Edge, he is coming off of a big win at the Diamond Nationals in the 10-11 point fighting division.

Aaron is from Nashville, Tennessee and is a 15-year-old black belt in Taekwondo under Jason Warren at Premier Martial Arts – Lebanon. He also earned a black belt in his original style of Tang Soo Do. He has traveled the NASKA circuit since 2017, and now joins his family members Amy, Eden, Elijah, and Miri as members of Team Competitive Edge. He trains under Jake Presley and has been consistently stepping up his game throughout the last few years, leading to his selection for the team.

The Competitive Edge coaching staff is very excited about these new athletes and look forward to seeing them take over their individual divisions throughout the 2023 season, as well as contributing to the reigning ISKA World Champion Competitive Edge demonstration team.