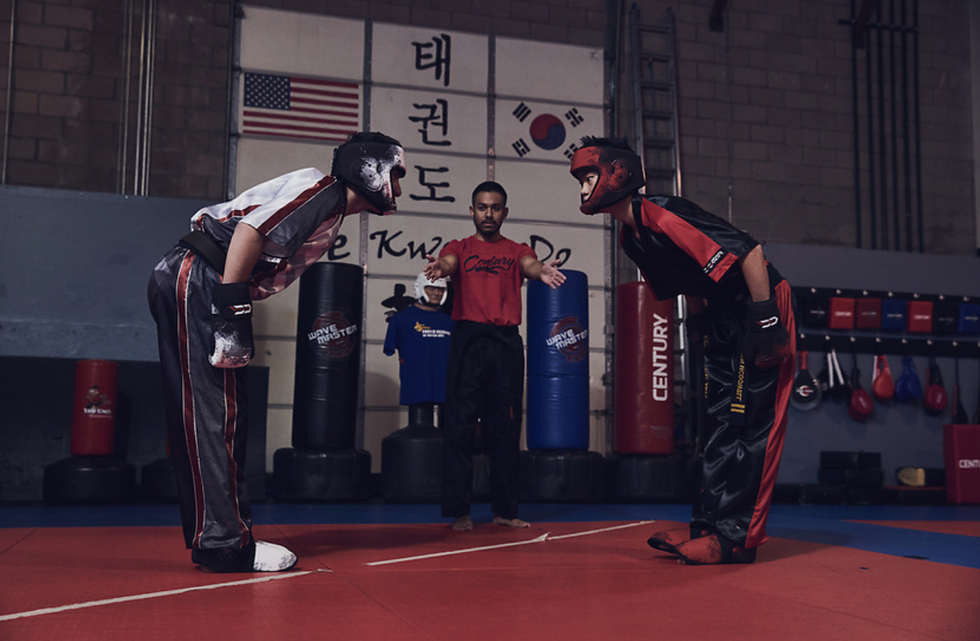 If you’ve been in the martial arts for a while, you have probably been to a tournament or two. You likely have even competed in forms and point fighting. This is an incredibly valuable experience for a multitude of reasons. Competing increases the ability to deal with your nerves while challenging your confidence and testing your fortitude against other like-minded individuals also vying for the top spot.

Today, I would like to focus on the “point fighting” competitions which are commonplace at tournaments. This is not to be confused with full-contact kickboxing or continuous sparring. Again, I’m referring specifically to basic point fighting. For those that are unaware, in point fighting, the referee stops the action when the first clean strike takes place. A point is awarded if the shot is to a qualified target area with an appropriate weapon. Then the fighters reset and do it all over again. The winner is the first competitor to reach three or five points (depending upon the organization).

As a point fighter, I was a decent competitor when I was a kid and later as an adult. However, looking back at my experiences and watching tournaments today, I feel that there are three main phases of point fighting that we must address if we want to get the most out of the practice: Pre-Point, The-Point and After-Point.

As the referee starts the action, the chess game begins. Fighters strategize and move about, trying to create an opening in their opponent’s guard to be the first to strike. Frequently, in doing so, a “fighting stance” is assumed that wouldn’t be ideal in a real-life altercation in most situations. An excessively bladed stance with arms low and out of protective position seems to be the norm. Now, as far as bating someone in or preparing for a quick strike, this works for many individuals. The concern though is that should this practice be adapted in a self-defense situation; the result could prove less than desirable.

In my early training, we didn’t train for tournaments per se. We focused on more traditional sparring specifically for self-defense. That said, I would maintain a stance and movements more like a real-life situation when point fighting. This is my stance, literally and figuratively, on the subject. I’m not saying that the way I competed is the right way. I’m simply saying that I found some success in the tournament game while simultaneously working on getting reps in a high-pressure situation using technique similar to those which I would hope to use in an altercation should it become necessary.

As a final thought on the Pre-Point, I ask that you consider how what you’re doing before the first strike is thrown can relate to how you react and prepare for contact in a real-life situation.

As previously mentioned, The-Point occurs when one competitor hits the other in an appropriate target area with a suitable weapon. Different tournaments have different rules, but typically a punch or kick to the stomach, ribs or head typically qualify as a point. That said, not all points are equal in real life. What I mean is that though they may both result in the same score at a tournament, a solid drag-up side-kick to the ribs will have a very different effect than a backfist to the forehead while leaping away from a charging adversary. One could put them out of commission, while the other they may not even really be noticed in the heat of battle.

I liken this idea to “stopping power” that we here about when people discuss firearms. A 12-gauge slug from a double barrel shotgun has a very different effect on a target than a BB from an air pistol. Targeting and precision are important, but ultimately whatever is delivered must also pack a punch.

As we extend this idea into point-fighting, I leave you with a question to consider regarding “The-Point.” Does the technique you’re using to score The-Point contain the necessary power for the desired result, should you need to deploy it in a life and death situation?

When a point (no matter the level of power) is scored, the referee calls a stop to the action. This can lead a competitor to go for the point without considering what happens afterward, ultimately leaving themselves in a precarious position in the hopes of scoring a point that in real-life wouldn’t have any stopping power. Scenarios like this happen because, should the point land in a tournament, there is no need to fear or prepare for the moment after. In real-life, or full contact sparring for that matter, first contact isn’t the end of the action. First contact is just the beginning. There are of course the occasional one-shot knockouts, but this should not be relied on as the outcome of our offensive in a self-defense situation.

With this in mind, I ask that you consider what you’re doing immediately following a point. Are you turning away raising your hands in victory? Or are you maintaining a fighting stance and preparing to continue your offensive?

Point-fighting is a great exercise and wonderful way to enhance a person’s martial arts training. However, it is important to understand the limitations of the sport and adjust your approach, so that you or your students may reap the many benefits of competing all while enhancing one’s self-defense training.