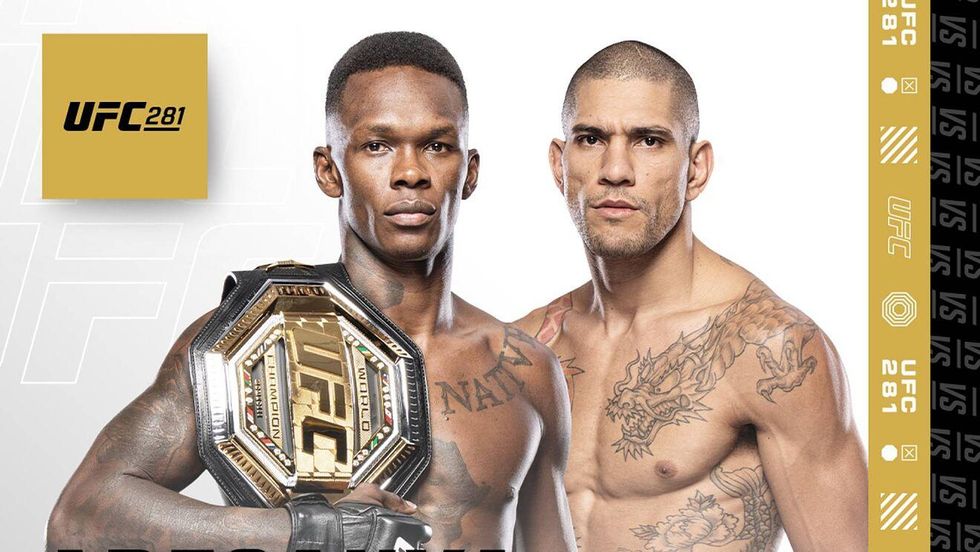 It’s all but guaranteed now that, barring some disaster, Israel Adesanya will face off against fellow Glory alumni Alex Pereira for the UFC Middleweight title. The two are talked up as big-time rivals, and there is some truth to that, but the two seem to be mostly respectful to one another. In the pre-fight press conference leading up to Alex Pereira’s match – Sean Strickland used his time on the mic to criticise Adesanya and said he would walk past Pereira and get to the title shot. Adesanya pointed out, that Alex Pereira would most likely knock Sean Strickland out, and how correct he was.

Alex Pereira has so far benefited in his short UFC career from a lack of solid wrestling opposition. Middleweight used to have a fair few strong wrestlers, but now aside from Derek Brunson, who is probably quite annoyed he can’t pick up a win vs Pereira, the division is largely full of strikers. Strikers with far less experience than Brazilian legend.

Israel Adesanya had a meteoric rise to the top of the division. He debuted in early 2018 and was the champion only a year later. He amassed a 6-0 record going into his title shot – and was 17-0 in MMA in general.

Meanwhile Alex Pereira was going through his Charles Oliveira-esque time at the top. Alex Pereira was a fighter who I had always seen potential in. After seeing him lose to the great Artem Levin in Glory Last Man Standing, I came away thinking that Pereira was likely going to be champion one day. After all, he was at least surviving against Levin, without having a particularly well rounded skill set. Little did I know that he would become Glory’s greatest kickboxer, holding two belts simultaneously and actually fighting in both divisions. Something you don’t see in the UFC.

The hype for this match up comes from their two kickboxing bouts, bouts that both saw Pereira emerge the victor. This has been the cause of several arguments between fight fans, both for and against Pereira against the champion.

There are two schools of thought, and both are flawed.

The first school of thought: Alex Pereira beat Adesanya both times they fought, and will beat him again in MMA because he ‘has his number’.

As a writer I usually try to be diplomatic, but in this case the reasoning is plain dumb. Pereira beat Adesanya twice, in a different sport, with different rules, gloves, arenas and different strategies, five years ago. While their match ups in kickboxing can tell you something about how they match up on paper – it doesn’t tell you how they will match up in MMA.

The second school of thought: Adesanya was robbed in their first fight, and was winning until the KO loss in the second fight. Adesanya is ‘on another level now’ and will win.

This is also silly. ‘Levels’ don’t exist in fighting. Fights are built off styles and exploitable habits. Nobody ‘levels up’ and is suddenly harder to beat. And while we talk of ‘levels’ it should be said that while Adesanya typically did get the better of the exchanges against Pereira, this was also long before Pereira was considered a particularly great kickboxer.

When they met in kickboxing, Pereira was a solid, if middling kickboxer, he was not the dual division legend he is today. If anyone has substantially improved since they last met, it is Pereira, not Adesanya.

So, let’s actually talk about kickboxing pedigree, and how it doesn’t necessarily translate to MMA.

Adesanya is frequently talked up for his kickboxing career. He sports 75 wins with 5 losses, though this record is hard to actually verify as correct. This is pretty impressive when compared to Alex Pereira’s 33-7 career. The nuance however comes when you look at quality of competition. Half of Adesanya’s record can’t actually be confirmed – but when we look at his recorded fights in the ‘big leagues’ it gets far less impressive.

Adesanya was certainly a very good kickboxer, but he didn’t beat anyone of note in kickboxing competition. In fact, he lost to every top name kickboxer he met; Simon Marcus, Jason Wilnis, and yes, Alex Pereira. There is of course nuance to this, his fights against Wilnis and Pereira were competitive and controversial – which is why I say he was very good, but it can’t be denied that while Adesanya had competitive bouts in losing efforts, Pereira left no doubt.

Adesanya never held a major title in kickboxing, whereas Pereira held two Glory titles simultaneously, and not only beat a better quality of opposition, but more consistently fought the top. Pereira has more losses in the sport, but he was fighting Artur Kyshenko, and Artem Levin, who was quite literally the best kickboxer in the world at that point, while Adesanya was competing against fighters without Wikipedia entries. Fighters who should be absolutely respected for getting in the ring, but likely were not fighters of Adesanya’s calibre.

In terms of kickboxing pedigree, there really isn’t much comparison. Alex Pereira’s career is much better. Does this translate to the same level of success in MMA?

Generally, no. Although at middleweight, apparently.

Both these fighters are very different, but they both share one key trait that allows them to succeed in MMA. They focus on single shots over combinations. Kickboxing combinations are powerful when used effectively, but they are a lot harder to land consistently in MMA. In fact, the fighter who is best at landing them, Jose Aldo, figured them out without ever competing in kickboxing professionally.

Kickboxing typically trains you to fight at a fast pace, up close with fast kickboxing combinations, this ‘K-1’ style is also about the last thing you want in MMA, where you fight at a much further distance. It’s easy to laugh at point-based karate styles as being ineffective, and they usually are in combat sports, but the few karate stylists who have made their approach work have largely been point based stylists, who were able to make the most of the distance control that those styles like Shotokan and Japanese goju trained them in.

Israel Adesanya’s game is built around feints and Brazilian kicks, which throw off his opponent and allow him to land pot shots over several rounds, to eventually wear down his opponent on a decision, or hopefully get a surprise KO from one big shot.

Adesanya doesn’t look to KO his opponents, he looks to win each round – which despite causing fans to criticise him, is actually the more reasonable strategy. Very few people are able to perfectly engineer a KO, the truth is that no fighter actually knows which strike will lead to the knockout. They just need to be ready for the right moment and hope. A good strategy, like what’s employed by Adesanya will make that desired KO far more likely to happen than relentlessly swinging power shots and hoping.

Adesanya is usually able to KO lower-level opponents, but in both MMA and kickboxing, when fighting in the bigger leagues, he tends to play it safer. He is frequently criticised for being a decision fighter – and there is a degree of truth to that, but in no way does this make him a bad fighter, nor does it mean he isn’t capable of picking up a KO.

Meanwhile Alex Pereira knocks people out. He started off his career with nothing but a left hook, and has now geared his whole style around landing that perfect lead hook. His jabs, body jabs, rear straights and even his kicking game are all engineered to land that big left hook.

I say big left hook, but in truth Pereira has something much better than that, he just has freakshow power. Pereira knocks people out with shots that don’t even look loaded up on, he looks very relaxed and technically sound, there’s no big swing or even much speed to indicate he is swinging hard, he just lands the shot and opponents fall. This is the shot he will look to land on Izzy.

But what about the cage?

Unless Adesanya decides to drop and go for a takedown in this fight, which would be supremely funny, we can reasonably assume that this will be a kickboxing bout with four-ounce gloves. Those gloves will undoubtedly make Pereira far more dangerous to receive a hit from – but what strongly plays into Adesanya’s favour this time around is the cage.

In kickboxing the fights are contested in a ring, and a ring means corners. Adesanya is a fighter who likes space and distance. He wants to use his lateral footwork to escape from his opponents, faking one way before heading out the other – and this is all far easier to do in a cage than in a ring.

A ring is smaller and has corners that you can be trapped in. While boxers are able to duck and weave around a ring with reckless abandon, these are movements that aren’t possible in kickboxing due to leg and body kicks. You have to be far more conservative with your movement and this is a big part of why Adesanya has been so much more successful as an MMA fighter than as a kickboxer.

In MMA Adesanya is free to dodge and leap out of the way of attacks to his hearts content. There aren’t really any corners for him to get trapped in and the cage offers him so much more space. Alex Pereira won the previous bouts, though they were competitive, but he had the advantage in arena. A small space with corners will always favour a power puncher.

While he can certainly still land that KO punch against Adesanya, actually being able to do so is going to be so much harder because his evasive opponent has so much more space to be evasive in. Ordinarily the best course of action would be to go on the counter, as Cody Garbrandt did to Dominick Cruz, but this is a lot harder to do with Adesanya’s commitment to pressuring feints. It’s hard to counter an opponent when you are being overloaded with possible strikes to counter.

This is why, despite Poatan being the better kickboxer, I think this MMA bout does favour Israel Adesanya. All Pereira needs is one big shot, but that one shot will be much harder to land. That being said, we haven’t seen Adesanya against a striker who has previously KO’d him before and we don’t know how he will approach the fight. It’s hard to imagine he’s that bothered about the fact he’s previously lost to Pereira, he doesn’t seem the sort of fighter to be rattled by such a thing – but it could affect his game planning when this fight is finally confirmed.

Until then, we play the waiting game – but it will surely be an exciting fight once it happens.