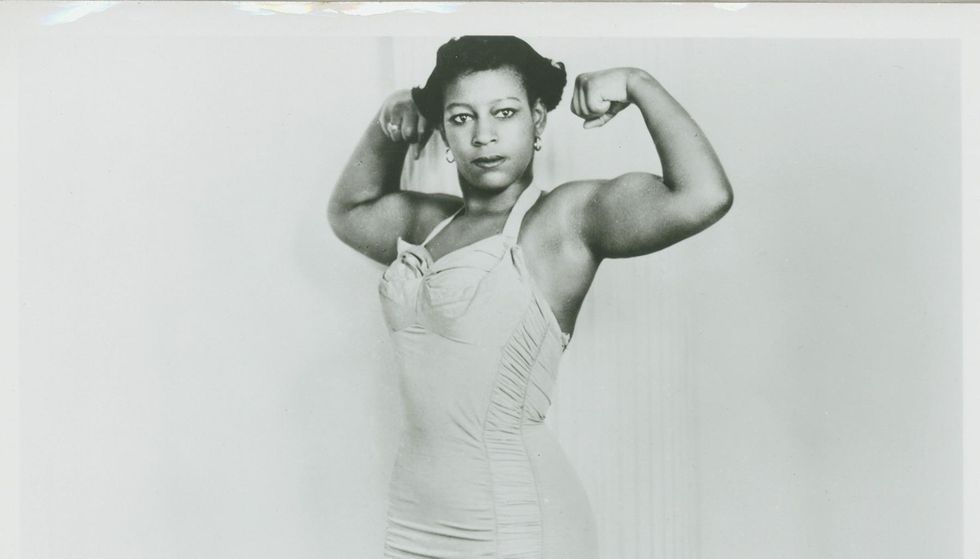 Chris and I talked about the incredible athleticism and training that you all had. Your publicity shot shows you flexing your guns!

Wimbley: (laughs) Babs [Wingo] was the very first, then her sister Ethel [Johnson] came in. Ethel was so agile and probably one of the only girls who could do a drop kick. She became very popular because she was smaller and moved much faster and was quite attractive. Their sister Marva [Scott] joined us later.I met Mildred Burke once and she said, “I recognize you — you’re the girl with my arms!”

We trained and worked out in the gym. Billy Wolfe [and Mildred Burke] had a stepson Joe. [He] was always in the gym with us. He never wanted to be a wrestler, but he knew a lot about certain things, and he could tell you how to do it this way or that way and stuff like that.

Frankie Talaber was in the gym and so was Roy [Shire]. Anyway, the girls had a time, and the guys had a time. We were there first. Sometimes they’d see us practicing and would come into the ring and show us new holds and things, you know.

Bournea: They ate lots of lean proteins, practiced tumbling techniques and holds, even lifting weights and performing acrobatics for three hours every day. They practiced with the white women who were older and well-known in the organization, like Mae Young and others. They worked well together and mentored them.

My big brother came home from the Marines. I told him that I wanted him to teach me how to do judo. He said that women didn’t do judo but the closest thing that I could do was wrestling. When I found out that we had a wrestling school in Columbus, Ohio, I went! — Kathleen Wimbley (shown)Did the women talk much about their fan base?

Bournea: They had loyal fans all over the world, and what’s interesting about women’s wrestling even now is that the majority of the fans were men of all different races. They traveled to places like Japan, Canada, Mexico, Cuba before the embargo, Australia, Latin America and across the States. People always came up after their matches and stood in line to ask for autographs. They were very gracious and would always greet them afterward.

Why do you think so many people came out to see women wrestle?

Wimbley: We brought it to a different level audience wise. And one of the things — I’ll tell you, wrestling had some gorgeous girls. You’d think that we were movie actresses! Yeah, we didn’t come out looking like Buffalo Bill; the girls were gorgeous. And so whenever the girls were added to the card, they drew more people because people really liked to see the girls. I think we had more fire.

We were moving more because wrestling was just big, heavy, chunky guys that just walked around, grunting and all. We would fly all over the place — in the ropes, out of the ropes, on the ground, jumping over the ropes, jumping off the ropes. My specialty was the “airplane spin,” so when I wrestled my opponents [and] did the airplane spin, they knew it was over.

Is there any footage out there of the lady wrestlers in action?

Bournea: Yes, there actually is. I have just a little clip that I was able to find. There’s more on YouTube, but I don’t know the source of it, and it would have taken so much time to try to find out who owns it, but there is footage out there. It’s very grainy and just little moments here and there. I don’t know if there’s like a whole match on film.

During the golden age of women’s wrestling, these female athletes traveled the country and the world, and they were respected for their strength, athleticism and “beauty in motion.” They were paid professionals and superstars on television. Before the rise of the storefront dojo, the sport-karate tournament and even a magazine called Black Belt, these women were feted in mainstream periodicals and major newspapers.

What most people don’t know is that the integration of African-American women into this part of society by Wolfe and Burke was inspired by Branch Rickey’s success with Jackie Robinson in Major League Baseball. The combat-sports queens and female martial artists we know so well today stand on the shoulders of all those pioneers of women’s wrestling — and on the shoulders of Robinson.

These grapplers played a critical role in breaking down barriers built on sexism and racism. Lady Wrestler pays homage to and illuminates the contributions of these unsung sheroes of “herstory.”