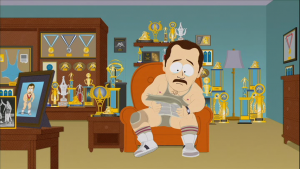 You have been training for many years, but now your high school wrestling career is about to come to an end.  Your college may not have a wrestling team and you are not in the 1% of the athletes destined for the Olympics.  You have too much skill and pride, but not enough steroids, to don a Lucha Libre mask and become El Pollo Loco.

You could join one of those Brazilian Jiu-Jitsu (BJJ) clubs, but that is just counter intuitive to everything that you have learned.  Flopping to the floor instead of dominating the takedown?  Falling on your back is supposed to be the last resort, not primary strategy.  Besides, the cost is outrageous.

What about Judo?  You heard about it, but someone told you it has some really stupid rules.

The Wrestling Takedown Federation (W.T.F.) is what we call our Judokai Warriors who found themselves in exactly your situation.

We are experienced wrestlers who learned and loved “old school” Judo.  “Old School” Kodokan Judo is the Judo that includes ALL of the takedown and grappling techniques that wrestlers like you already know.  Now with Judo, you get to add in all those fun armbars and chokes that you really wish you could have used during your wrestling career.

The Judokai supports “old school” Kodokan Judo rules, as well as, the new modern Freestyle Judo ruleset.  Both of these competition formats are fully supported and sanctioned by the Amateur Athletic Union (AAU), the largest sports governing body in the United States.

To put it in simplified terms, Freestyle Judo is “old school” Judo techniques and rules with modern wrestling style scoring.

But, what about those silly pajamas Judo guys wear?  You think it might require special training to learn how to fight in a Judo Gi.

Well, the wrestling pantyhose/singlet looks pretty silly too, but you got used to it.

The Judokai believes it doesn’t matter if you are wearing a pajamas or pantyhose, grappling is grappling.  All members learn to compete with and without a Judo Gi.  Frankly, it is not as much of a difference as many schools will make you think.

So, stop making excuses, get off your ass, and come join the Wrestling Takedown Federation at The Judokai for Judo, Jiu-Jitsu, and Wrestling – the way it ought to be.

A wrestler with nothing to do