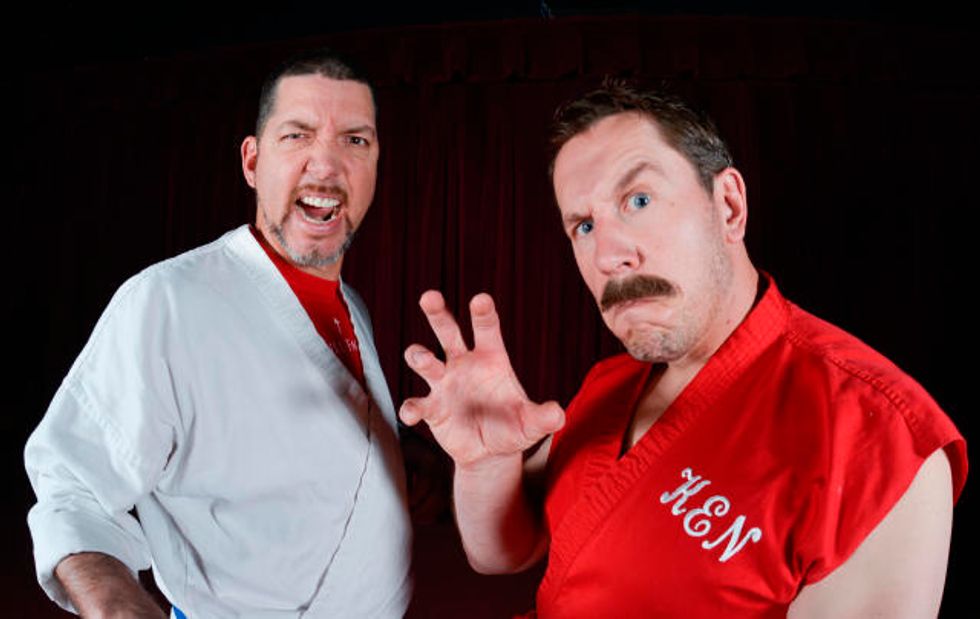 If you haven’t watched the wildly popular Enter the Dojo comedy series, do it now. Before you read this article. Go to YouTube and click. That’s the only way you’ll be able to put a face, a voice and a moustache behind the wacky words that come from the martial artist known as Master Ken.

Caution: You’re about to read comments from a real martial artist (Matt Page) interspersed with comments from a fictional character (Master Ken). To make it easier to distinguish the two, we’ve italicized the words of Master Ken.

BLACK BELT: WHEN YOU’RE IN CHARACTER AS MASTER KEN, YOUR MOVES REMIND ME OF KENPO. DO YOU COME FROM A KENPO BACKGROUND?
Matt Page: My first style was Okinawan kenpo and kobudo. I received my first-degree black belt from Rich Pelletier in 1996. He was an amazing instructor and instilled discipline and structure in my life when I really needed it. His school was very traditional and gave me a strong foundation not only in martial arts as a way of self-defense but also in martial arts as a way of life.

After that I moved around a lot and sampled various arts: aikido, boxing, stick fighting, etc. Then I settled on American kenpo, studying under Tony and Erika Potter in Santa Fe at one of Jeff Speakman’s kenpo 5.0 schools. I’d always wanted to learn the kind of kenpo I’d seen in movies like The Perfect Weapon, so that was great fun.

More recently, I’ve been studying Brazilian jiu-jitsu. There are so many styles I’d like to study — hapkido, kung fu — but for some reason, I’m always drawn back to some form of kenpo.

Silat for the Street is the title of an online course from Black Belt Hall of Famer Burton Richardson and Black Belt magazine. Now you can learn the most functional silat techniques whenever and wherever you want on your smartphone, tablet or computer. Get more info here!

BLACK BELT: MASTER KEN, I KNOW YOUR BACKGROUND IS IN AMERI-DO-TE, BUT IN THE MAGAZINE, WE NORMALLY DON’T USE CAPITAL LETTERS WHEN WE WRITE THE NAMES OF MARTIAL ARTS. ARE YOU COOL WITH US SPELLING THE NAME OF YOUR ART “ameri-do-te,” OR IS THAT AN INSULT TO EVERYTHING YOU STAND FOR?

Master Ken: I notice you don’t have a problem capitalizing Black Belt. How would you like it if I called you “black belt magazine”? It’s not only an insult; it weakens the word. The capitalization of not one, not two, but THREE letters in the name of my street-lethal fighting system lets people know how serious it is. Speaking of serious: By the authority vested in me as the creator of and 11th-degree black belt in the most dangerous martial art in the world — Ameri-Do-Te — I hereby demote you to white belt.

BLACK BELT: DID YOU LEARN ameri-do-te FROM A MASTER, OR DID YOU CREATE IT?

Master Ken: I wasted years of my life studying pretty much every combative system in the world. In kenpo, they’re always slapping themselves. For every time a kenpo guy hits his opponent, he hits himself three times — which is great because if you fight a kenpo black belt long enough, eventually he’ll kick his own ass.

In krav maga, they don’t even use the belt system. How are they supposed to know who’s more advanced? All they do is trade patches like a bunch of Girl Scouts.

Tai chi is a martial art designed specifically for sissies and old people. I once saw a tai chi instructor get beat up by a mime. He got thrown into an imaginary wall and choked with an invisible rope.

Each time I learned a new martial art, I could see a few moves that worked — with my own special modifications, of course — but I also found flaws and weaknesses everywhere. My style takes the best parts of every other martial art in the world with none of the weaknesses. That’s why we like to say “Ameri-Do-Te: Best of All, Worst of None.”

BLACK BELT: DO YOU HAVE YOUR OWN KENPO SCHOOL?

Matt Page: I’ve never run my own school. I have helped teach kids’ classes and the occasional adult class at a few schools, but I’ve always thought of myself a perpetual student.

BLACK BELT: WHAT’S IT LIKE RUNNING THE SCHOOL THAT TEACHES THE MOST EFFECTIVE MARTIAL ART IN THE WORLD? ARE YOUR COMPETITORS JEALOUS? HOSTILE? HOW COME THEY’RE NOT ALL OUT OF BUSINESS?

Master Ken: The hardest part is getting people past the initial shock of how effective our style is. I get people who come in off the street and see us do our patented “groin sparring,” where the first student to grab the other student’s groin wins the match, and they just shake their heads and walk out. They’re too scared.

BLACK BELT: HOW DO YOU — AND MASTER KEN — COME UP WITH CONCEPTS LIKE “GROIN SPARRING”?

Matt Page: After high school, I moved to Southern California to become a movie star. Being so naive, of course, I struggled there. Each time I would move to a new neighborhood — which was often — I would go to the closest dojo and sign up for classes. One place had a method of training they called “groin sparring.” They said the groin was the only target that mattered in a street fight, so they didn’t focus on kicks or punches to other parts of the body. Whoever grabbed their opponent’s groin first won. Simple, right? But then for my first match, they made me fight a woman. That was just one of many bizarre experiences over the years.

BLACK BELT: WHERE DID THE NAME “ameri-do-te” COME FROM?

Master Ken: Most civilians think the word “karate” represents all martial arts. I believe that one day, my style of Ameri-Do-Te will replace all fighting systems, so I wanted it to sound similar but different. America has a great history of taking things created by other countries and improving them. Like Italian food. So I took the word “karate-do” and Americanized it to “Ameri-Do-Te.”

Also, having a martial art that begins with the letter “A” makes us first in the phone book.

BLACK BELT: WHO ARE SOME OF THE REAL MARTIAL ARTISTS YOU LOOK UP TO?

Matt Page: There are so many. From famous martial artists whose films drove my interest in the entertainment business — Jean-Claude Van Damme, Steven Seagal, Jeff Speakman, Jackie Chan and Bruce Lee — to those whose books and interviews in magazines inspired me to keep training — like Ed Parker, Bill “Superfoot” Wallace and Royce Gracie. It’s been totally surreal to meet some of these people in person after admiring their work from afar all these years.

The biggest irony about Enter the Dojo is that I pick on the styles and people I love the most. I’ve said some crazy things about Van Damme and Seagal, but that’s because they were my favorite action stars growing up. And I’m always poking fun at kenpo because it’s the style I’ve dedicated so much of my life to. So if Master Ken takes the time to go after you or your style, it’s a sign of affection.

BLACK BELT: ARE THERE ANY MARTIAL ARTS OR MARTIAL ARTISTS YOU LOOK UP TO?

Master Ken: Asking me what other martial arts I look up to is like asking me to pick my favorite disease. I could tell which ones are worse than others, but I wouldn’t choose any of them.

BLACK BELT: HAS ANYONE EVER BEEN SO UPSET AT SOMETHING MASTER KEN SAID THAT HE — OR SHE — CHALLENGED YOU TO A FIGHT?

Matt Page: Not me personally, but Master Ken has received hundreds of challenges, as well as some death threats. Those come mainly from people who don’t realize he’s a fictional character. Most of those people soon realize we’re kidding, but there are still a few who choose to remain hurt or threatened by what Ken says. I do a live show, and even at my best performances, I get reports afterward of people who were offended and got up and walked out. But that’s OK — you can’t please everybody, I guess.

BLACK BELT: HAVE YOU EVER HAD TO DEFEND THE HONOR OF YOUR SCHOOL OR ART IN A FIGHT? HOW DID IT TURN OUT?

Master Ken: Are you kidding? People come in off the street and challenge me all the time. I offer them a chance to sign the waiver that releases me from any and all responsibility should they be killed. It’s a 400-page document. No one has gotten past the first 50 signatures. But when they do, they will have signed their own death warrant.

“If you want to work out, go for it. Aerobics classes masquerading as self-defense — like cardio kickboxing — waste valuable time on cardiovascular fitness. I focus on street-fighting fitness. It’s a scientific fact that the more often you experience moments of sheer terror, the bigger your adrenal glands get, which allows you to hold more testosterone than the average person.

“Ameri-Do-Te drills get your blood pumping with a surprise attack by multiple assailants — for example, while you’re using the dojo toilet. To avoid getting winded, the fight should be over as quickly as possible. If your fight lasts longer than it takes me to tie my belt, you’re not ready for the street.”