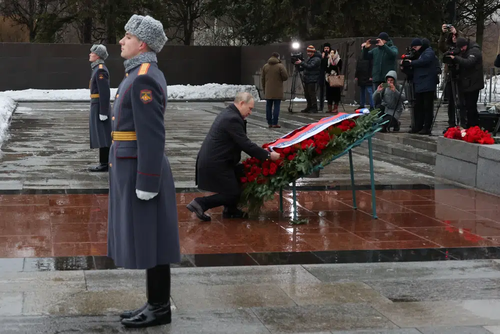 Putin: Victory In Ukraine Is “Unavoidable” & Invasion Was Effort To “Stop This War” In Donbas

In a highly anticipated speech Wednesday on the occasion of the 80th anniversary of the Red Army breaking the Nazi siege of St. Petersburg (during Soviet times: Leningrad) on Jan. 18, 1943, President Vladimir Putin said that victory in Ukraine is “unavoidable”.

Addressing military veterans, Putin said, “Large-scale combat operations involving heavy weapons, artillery, tanks and aircraft haven’t stopped in Donbas since 2014.” He added: “All that we are doing today as part of the special military operation is an attempt to stop this war. This is the meaning of our operation — protecting people who live on those territories.”

The talk was filled with the usual themes he’s emphasized since the February invasion, but absent was what many pundits and officials in the West were anticipating when the speech was first unveiled a day ago: formal declaration of war.

But the full mobilization has yet to come; instead, he again reviewed Moscow’s perspective of the causes underlying the conflict. He asserted that Russia attempted to negotiate a peaceful settlement to the years-running war in Donbas, in order to prevent the need to send troops, but emphasized “we were just duped and cheated” by Ukraine and the West.

He also said that Russia had a duty to protect the Russian-speakers of eastern Ukraine. The Zelensky government has of late cracked down even harder on Russian culture, placing severe restrictions on Russian books and music, and even arresting Ukrainian Orthodox clerics that maintain unity with the Moscow Patriarchate church.

The Associated Press references some interesting background regarding Putin’s personal family history, which makes the West’s ‘Putler’ references hollow and shallow, given that the Nazi siege of Leningrad (Petersburg) directly impacted Putin’s family:

Putin on Wednesday laid a wreath at the city’s Piskaryov memorial cemetery, where 420,000 civilian victims of the siege and 70,000 Soviet soldiers were buried. He also put flowers in a section where his brother, who died as a child during the siege, was buried in a mass grave.

Putin said once that his mother was declared dead and was about to be taken for burial when his father, who had just come home on a visit from the frontlines, managed to ward off a funeral team at the last moment and helped her recover.

Putin also on Wednesday toured a defense factory in St. Petersburg, where he pledged to the workers additional wartime benefits, while also touting advances in national arms production…

⚡️We ourselves have become able to produce what we could not before – Putin, a few moments ago. pic.twitter.com/NMjP2ahsnH

Meanwhile, just as Putin is vowing to see through the military campaign until ‘victory’ is achieved, Washington too remains entrenched in its position.

On Tuesday Secretary of State Antony Blinken underscored that peace with Russia is unacceptable. Blinken said the following, according to a press readout:

“…but I think you only have to look at Putin’s own words in a recent conversation with President Erdoğan of Türkiye in which he says unless and until Ukraine accepts the new territorial realities, as he put it, there’s nothing to negotiate. […] That of course is in and of itself a nonstarter.”

“The fastest way to bring this war to a just and durable end, to get to diplomacy, to get to a negotiation, is to give Ukraine a strong hand on the battlefield. That’s exactly what we’re doing,” Blinken continued.