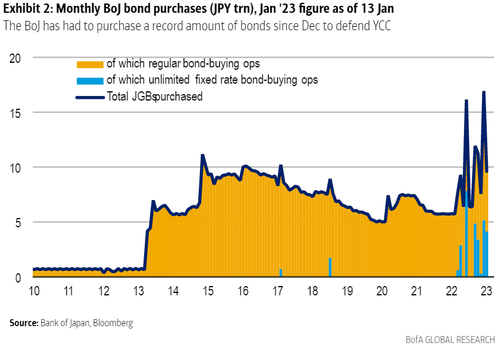 Ahead of today’s BOJ decision the market was on edge that one month after the December YCC “huge shock” when the central bank unexpectedly widened its Yield Curve Control band from +/-0.25% to +/-0.50%, in the process sparking a historic surge in the yen and explosion in bond market volatility, that outgoing BOJ governor Kuroda would double down and tweak the BOJ’s Yield Curve Control for the second time, especially after a report by Japan’s Yomiuri leaked last week that another adjustment was imminent.

And while most economists expected a hold by the BOJ, an unusually high number said they can’t rule out an adjustment to yield curve controls like the one that roiled markets last month, which is also why traders were betting on dramatic swings of 2% or more in favor of either the dollar or yen.

In the end, it all ended up being one giant nothinburger, because moments ago the BOJ reported that contrary to its own leaks a week ago, it maintained the YCC as before at 0.50%, while maintaining all other aspects of monetary policy as before (JGB yield target at 0% and policy rate at -0.1%, both targets which are completely incompatible with Japan’s soaring inflation). The BOJ also stated its intention to continue large-scale bond buying and to increase them on a flexible basis as it showed its intention to double down on defense of its yield curve control program for now.

Perhaps Kuroda got cold feet after seeing the observing the historic volatility in the JGB market when YCC cracked on several occasions in just the past week, and forced the BOJ to inject record amounts of cash just to keep the JGB market from imploding. Indeed, as shown in the chart below, while Kuroda insisted that December’s YCC tweak was aimed to improve market functioning, it only fueled speculation over more changes.

Whatever the reason, the BOJ chickened out, and in the process has only accelerated the inevitable collapse of its own unsustainable policy, and as Vanda Research’s Viraj Patel writes, “bond buying is nothing short of unsustainable” and its “only a matter of time before they lose control of JGB markets….Will be an opportunity for JGB bears to go again… ’23 forecast for core CPI at 1.8% looks low JPY”

⚠️ No change from BoJ. All down the middle. Good luck Kuroda… bond buying is nothing short of unsustainable. Only a matter of time before they lose control of JGB markets. Will be an opportunity for JGB bears to go again… ’23 forecast for core CPI at 1.8% looks low $JPY pic.twitter.com/3blNXPlHmf

And while the market welcomed today’s retreat by the BOJ, with equity futures spiking…

… while the yen tumbled by over 200pips as the dovish move means the BOJ will have to print and inject trillions more to support the artificially low yield on the 10Y.

Finally, today’s lack of action simply ensures much more volatility in the coming days as bears will aggressively hammer the 10Y sending its yield surging ever higher, which in turn will force the BOJ to intervene even more aggressively, guaranteeing much more fireworks before Kuroda steps down in April.

And sure enough, the 10Y JGB is already breaching the YCC band, trading at 0.52% and forcing the BOJ to scramble to preserve its last shred of credibility.