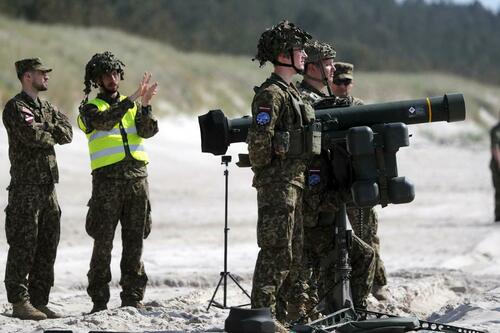 Ukraine has turned into a “lab” for Western arms as the war has given the US and its allies an opportunity to see how their weapons fare in a conflict with a major military power like Russia, CNN reported on Monday.

A source familiar with Western intelligence on the war told CNN that Ukraine is “absolutely a weapons lab in every sense because none of this equipment has ever actually been used in a war between two industrially developed nations.” The source described it as “real-world battle testing.”

Back in July, Ukrainian Defense Minister Oleksii Reznikov offered his country as a “testing ground” for Western arms makers. “We are interested in testing modern systems in the fight against the enemy and we are inviting arms manufacturers to test the new products here,” he said.

Reznikov got his wish as the US, and its allies have significantly stepped up military aid since then, and the war has escalated as Russia began large-scale strikes on Ukrainian infrastructure in October. Russia’s success in its use of cheap kamikaze drones in the infrastructure attacks has influenced plans for Western arms makers.

The British arms maker BAE Systems has announced that it’s developing a new armored vehicle with added protection to defend it from kamikaze drone attacks from above.

Multiple intelligence and military officials told CNN that making cheap single-use drones has become a priority of many defense contractors.

The CNN report said that for the US military, the war has become an “incredible source of data on the utility of its own systems.” For example, the US has seen that its HIMARS rocket launch system has been effective against Russian forces, while the M777 howitzer has become less effective and less accurate over time.

A source connected to Western intelligence tells CNN that Ukraine is “absolutely a weapons lab in every sense… This is real-world battle testing.”

The war in Ukraine has also created a demand for weapons that were beginning to become obsolete, such as the Stinger shoulder-fired anti-aircraft missiles. Raytheon stopped producing Stingers for years but now has been asked by the Pentagon to ramp up production as thousands have been shipped to Ukraine.