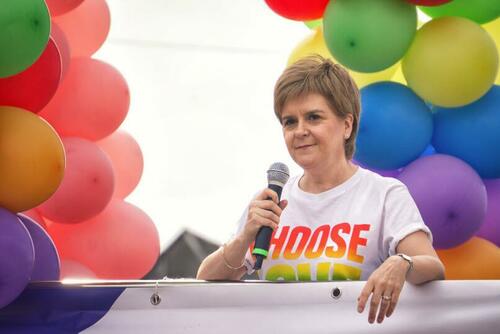 The U.K. government has announced it will use a constitutional mechanism for the first time to block controversial gender reform legislation passed by the Scottish government to make it easier for people to change their gender.

The Gender Recognition Reform (Scotland) Bill was approved by 86 votes to 39 in Holyrood shortly before Christmas. If enacted, it would have removed the requirement for a diagnosis of gender dysphoria from a doctor in order to apply for a gender recognition certificate (GRC).

It would also have reduced the time an applicant must live in their preferred gender from two years to just three months, and perhaps most controversially, would have lowered the minimum age a person can apply for a GRC from 18 to 16.

On Monday, the U.K. government’s Scottish Secretary Alister Jack announced he would invoke a clause in the legislation that handed the Scottish government devolved powers from Westminster to block the bill from becoming law.

“I have decided to make an order under section 35 of the Scotland Act 1998, preventing the Scottish Parliament’s Gender Recognition Reform (Scotland) Bill from proceeding to Royal Assent,” Jack wrote in a statement.

“After thorough and careful consideration of all the relevant advice and the policy implications, I am concerned that this legislation would have an adverse impact on the operation of Great Britain-wide equalities legislation.

“Transgender people who are going through the process to change their legal sex deserve our respect, support, and understanding. My decision today is about the legislation’s consequences for the operation of GB-wide equalities protections and other reserved matters.

“I have not taken this decision lightly. If the Scottish Government chooses to bring an amended bill back for reconsideration in the Scottish Parliament, I hope we can work together to find a constructive way forward that both respects devolution and the operation of UK Parliament legislation,” Jack added.

The decision has sparked outrage among the government in Scotland, run by Nicola Sturgeon’s Scottish Nationalist Party (SNP), which has long advocated Scottish independence from Westminster.

In response, Sturgeon called the move a “full-frontal attack on our democratically elected Scottish Parliament and its ability to make its own decisions on devolved matters.”

She vowed to “defend the legislation and stand up for Scotland’s parliament,” warning that if the U.K. government was successful in vetoing the bill, “it will be the first of many.”

Progressives in Holyrood passed the bill despite polling results published last month showing as many as two-thirds of Scots aged 16 and over oppose the plans. In particular, 66 percent opposed reducing the minimum age required to apply for a GRC from 18 to 16 years old.