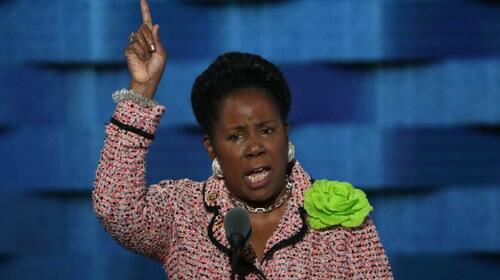 The anti-free speech movement in the United States continues to grow with alarming speed among writers, journalists, academics, and most importantly Democratic members of Congress. Members now openly call for censorship and the manipulation of what citizens see and read. Yet, even in this environment, a recent proposed by Rep. Sheila Jackson Lee (D., Tx.) is a menacing standout. Jackson has introduced a bill that is an almost impenetrable word salad of convoluted provisions. However, what is clear (perhaps the only clear thing) is that the “Leading Against White Supremacy Act of 2023” would gut the First Amendment and create effective thought crimes. The bill is not going to pass. However, the anti-free speech elements of the bill are deeply disturbing because they reflect successful efforts at speech criminalization in other countries. It also reflects elements in a bill that I testified against last year in the Senate.

The criminal penalty is based on this general provision:

Thus, anyone who is accused of white supremacy ideology (as both to other race-based ideologies) can be charged if such views have “motivated” others to plan or perpetrate criminal acts. It is a criminal hate speech law that would violate core principles of the First Amendment. It makes clear that the accused does not actually have to support or conspire in a crime. Even being accused of espousing “replacement theory” is enough to generate a federal charge.

The “Great Replacement Theory” was the focus of a Senate Judiciary Committee hearing last year, in which Democrats alleged that Republicans — and Fox News in particular — are “radicalizing” domestic terrorists with rhetoric opposing illegal immigration. (I testified at the hearing).  Members advocated legislation to force the FBI to focus on such theories as dangerous white supremacy threats.

The Jackson bill would allow postings on social media to be the basis for criminal charges:

Once again, this is so flagrantly unconstitutional on so many levels from free speech to vagueness that it is actually impressive. It is easy, however, to dismiss except that such criminal penalties exist in other countries like England where even a silent prayer is a criminal offense when done near an abortion clinic.

While most of us find Brock’s views repellent and hateful, they were confined to his head and his room. Yet, Judge Peter Lodder QC dismissed free speech or free thought concerns with a truly Orwellian statement: “I do not sentence you for your political views, but the extremity of those views informs the assessment of dangerousness.”

Lodder lambasted Brock for holding Nazi and other hateful values:

“[i]t is clear that you are a right-wing extremist, your enthusiasm for this repulsive and toxic ideology is demonstrated by the graphic and racist iconography which you have studied and appeared to share with others…”

Even though Lodder agreed that the defendant was older, had limited mobility, and “there was no evidence of disseminating to others,” he still sent him to prison for holding extremist views.

After the sentencing Detective Chief Superintendent Kath Barnes, Head of Counter Terrorism Policing South East (CTPSE), warned others that he was going to prison because  he “showed a clear right-wing ideology with the evidence seized from his possessions during the investigation….We are committed to tackling all forms of toxic ideology which has the potential to threaten public safety and security.”

“Toxic ideology” also appears to be the target in Ireland with the recently proposed  Criminal Justice (Incitement to Violence or Hatred and Hate Offences) law. It would criminalize the possession of material deemed hateful. The law is a free speech nightmare.  The law makes it a crime of possession of harmful material” as well as “condoning, denying or grossly trivialising genocide, war crimes, crimes against humanity and crimes against peace.” The law expressly states the intent to combat “forms and expressions of racism and xenophobia by means of criminal law.”

What is so striking about the law is that it allows for the prosecution of citizens for “preparing or possessing material likely to incite violence or hatred against persons on account of their protected characteristics.” That could sweep deeply into not just political but literary expression.

Once again, the Jackson bill will thankfully die in the House. However, it reflects the same erosion of free speech values that we have seen in other countries from Canada to Germany to the United Kingdom.