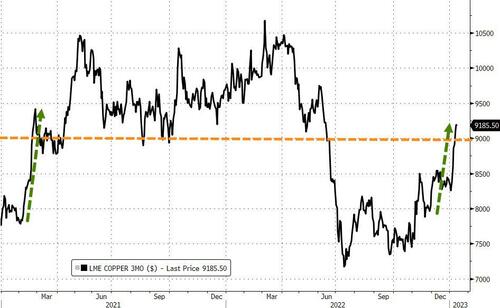 By Ewa Manthery of ING Economics

Copper jumped above $9,000/t for the first time since June at the beginning of 2023 on optimism about China’s economy, after Beijing abandoned its zero-Covid policy.

We believe there is more upside for copper prices as demand in China picks up after the Lunar New Year holiday at the end of this month.

Copper has been rallying since late November amid a series of supportive policies in China and Beijing’s abrupt abandonment of Covid controls. The red metal has also received support from the weaker US dollar, which slid to a near seven-month low recently on growing expectations for a less hawkish Federal Reserve after cooler inflation and employment data.

In our November outlook, we said China remained the big question mark for the copper market going forward. There have been important developments since then, with China making a full U-turn on its zero-Covid strategy.

The virus was officially downgraded on 8 January when international arrivals were no longer required to quarantine.

China’s lifting of Covid measures will, in time, help the economy to normalise, our China economist believes. But we can expect the short-term to be dominated by the very high level of Covid cases, which have come at a time when the economy is already very weak.

Looking at other economies in the region which have suffered similar severe waves of Covid (India’s Delta wave) we would expect this wave to last no more than three months at which time the economy could start to revert to a more normal footing. Zeng Guang, the former chief scientist at the Chinese Centre for Disease Control and Prevention, has recently said that China’s Covid outbreak could continue for another two to three months.

However, this could also coincide with the US and Europe entering recession, which will weigh on any manufacturing recovery and export growth even as China’s domestic issues abate.

We believe, for copper, China’s Covid policy change should prove supportive for demand in the medium to long run, although rising Covid infections could weigh on demand in the immediate term.

Beijing has released a raft of policy measures in recent weeks which have increased confidence that the economy is stabilising, improving the outlook for industrial metals, including copper. For almost two decades, China’s property sector growth and the country’s rapid urbanisation have been the key driver of growth for copper demand.

China will return to “normal” growth soon as Beijing steps up support for households and businesses, Guo Shuqing, party secretary of the People’s Bank of China, told state media recently.

The world’s biggest consumer of copper is expected to quickly rebound because of the country’s optimised Covid response and after its economic policies continue to take effect, Guo said.

In its most recent move, China is planning to allow some property firms to add leverage by easing borrowing caps and pushing back the grace period for meeting debt targets. The move would relax the strict “three red lines” policy which had contributed to a historic property downturn, hitting demand for industrial metals. The easing would add to a raft of policy moves issued since November to bolster the ailing property sector, which accounts for around a quarter of the country’s economy.

China’s economy ended 2022 in a major slump. Factory activity in the country contracted in December at the fastest pace in nearly three years. The official manufacturing purchasing managers’ index (PMI) slumped to 47 last month from 48 in November, according to the National Bureau of Statistics.

It was the biggest drop since February 2020 and also marked the third straight month of contraction for the index.

The non-manufacturing PMI, which measures activity in the services sector, plunged to 41.6 last month from 46.7 in November. It also marked the lowest level in nearly three years.

And although the government has stepped up its support for the property market, the effects are still slow to take effect – home sales fell again in December. The 100 biggest real estate developers saw new home sales drop 30.8% from a year earlier to 677.5 billion yuan ($98.2 billion) in December, according to data from China Real Estate Information Corp. That compared with a 25.5% decline in November.

Housing prices fell 0.25% in December from the previous month, the 16th consecutive month of declines.

We believe more stimulus and infrastructure spending could be unveiled at the National People’s Congress in March, which is likely to boost demand for commodities further.

The demand boost for copper comes at a time when global stockpiles held by exchanges remain low. Last year, shrinking inventories were overshadowed by weakening global demand, but a revival in demand this year could set up the market for further squeezes and spikes in prices.

Copper stocks in LME warehouses remain low, representing just two days’ worth of global usage. Inventories on the SHFE and COMEX are also extremely low. Between the three exchanges, global copper inventories are now down to just a few days of consumption.

We have increased our 2023 copper price forecast amid China’s reopening optimism, but we maintain a cautious view for the first quarter as Covid cases across China continue to rise. We now see copper prices averaging $8,700/t in the first quarter. We believe any further gains are likely to be capped as the Lunar New Year approaches.

Following a surge in cases, economic activity will start to revert to a more normal footing with demand recovering by the second quarter.

But we expect this to be temporary and China’s Covid policy change should prove supportive for copper demand in the medium and long term.

We believe that once China gets over the current wave of Covid-19 infections and the country learns to live with Covid, a recovery in Chinese demand will boost copper prices further.

We expect prices to continue to recover from the second quarter onwards on the back of improving reopening sentiment and tight inventories with prices hovering around $9,100/t in the fourth quarter.

However, global macroeconomic headwinds are likely to persist in 2023 and the risk of global recession will remain a threat to the demand recovery in China, capping further gains.

Any further spikes in copper prices will also depend on the US Federal Reserve’s stance towards its monetary policy. Less aggressive tightening would limit any upside in the US dollar and could further boost copper prices.

Longer-term, we still believe copper demand will improve amid the accelerated move into renewables and electric vehicles (EVs). In EVs, copper is a key component used in the electric motor, batteries, and wiring, as well as in charging stations. Copper cannot be substituted in EVs or wind and solar energy, and its appeal to investors as a key green metal will support higher prices over the next few years.