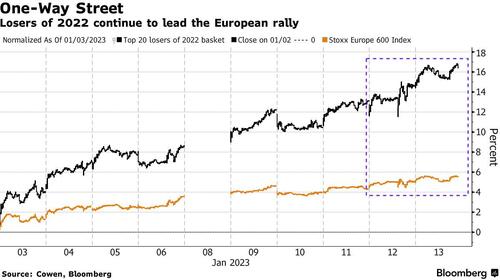 Authored by Michael Msika via Bloomberg,

European stocks are surging like never before in the new year, revved up by a surprise softening in inflation readings as well as resilient economies. While low positioning and bullish technicals point to more upside, there are roadblocks ahead.

The Stoxx Europe 600 index just had its best start of a year on record, advancing 6.5% over the first two weeks. The performance already exceeds strategists’ forecasts for the full year.

“Markets may have good reasons to see the glass half-full on inflation and dismiss hawkish central banks’ rhetoric,” says Barclays strategist Emmanuel Cau, while warning that some consolidation “would make sense and feel rather healthy.”

But overall, the strategist says positioning and sentiment are not as bullish as European price action suggests, and sees further gains possible, noting the rally seems more due to short covering than capital reallocation to the region.

And technicals are rather bullish, according to DayByDay analyst Valerie Gastaldy, who says the Euro Stoxx 50 could well gain another 10% within a few weeks once it catches a second wind. She sees the first real resistance for the index at 4,415 — the high from 2021.

“In the short-term, the market may feel overheated, especially as there is no confirmation yet that yields will rise more slowly,” Gastaldy says, but technicals signal that the most probable scenario for the Euro Stoxx 50 is to rocket to a new high, with the current rally having at least the same size as the one in November.

No part of the market is oversold and there seems to be a lack of interest in buying downside protection, even with volatility under 20 — which was a key sell signal over the past year.

In fact, many strategists are scratching their heads and sticking to a view that a storm is coming and investors should hedge. BofA strategist Sebastian Raedler even sees 20% downside by the second quarter as economic growth momentum fades due to monetary tightening.

The upcoming earnings season could be a reality check for Europe, although even the salvo of profit warnings from the past few days — including Logitech, Ubisoft, Halfords, Signify, VAT and Gym Group — failed to dent investor optimism.

For now, bears are lacking arguments. The extension of the rally from 2022 losers, along with Europe’s largest company LVMH trading at an all-time high, makes finding shorts very difficult, according to Cowen’s EMEA head of trading Carl Dooley.

“So some kind of pullback looks fair,” he says. “It certainly feels like one is due. But aren’t we all thinking that?”