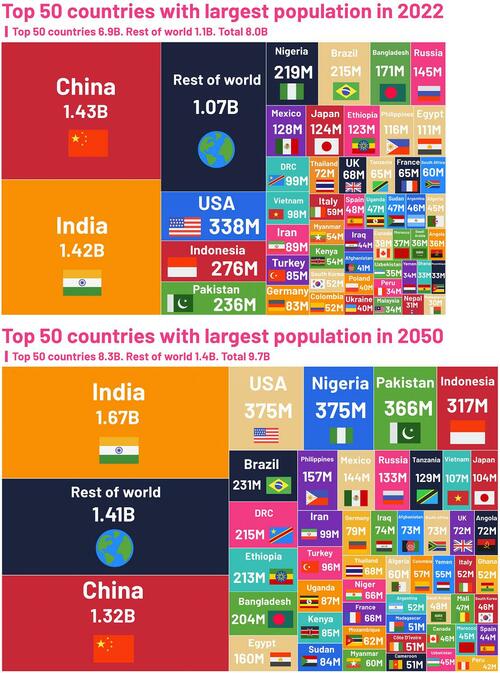 On average, there are 250 babies born every minute around the world. As Visual Capitalist’s Freny Fernandes details below, this adds up to over 130 million new human beings entering the world every year.

Then it’s no surprise that the world’s population, which now stands at a whopping 8 billion, has more than tripled since the mid-20th century.

This graphic by Truman Du uses December 2022 population data from the UN and summaries from the French Institute for Demographic Studies (INED) to show the unequal rise and fall of the world’s population by 2050.

Let’s take a closer look at some of these population trends.

The Asian countries of India and China have topped the rankings of the world’s most populous countries for hundreds of years.

China currently holds the number one spot on this list. But the population of India is expected to surpass that of China’s by later this year, eventually reaching a total of 1.67 billion in 2050.

The United States, Nigeria, Pakistan, and Indonesia are the next most populous countries in 2022, and they are expected to hold onto these spots until 2050. However, they have a long way to go before catching up with the top two, as their combined population doesn’t add up to half that of India and China’s total.

Interestingly, it is estimated that Nigeria’s population will shoot up to 375 million by 2050, almost matching the population of the United States. In 2022, the African country’s population was just around 219 million. This expected spike is largely due to a high birth rate and booming economy, and the resultant rural-to-urban migration.

While many countries will be seeing their populations boom over the next three decades, other nations such as China are expected to experience the opposite.

Several countries in the world are expected to see their populations decline over the next 30 years. And the main reason for this: extremely low birth rates.

South Korea, which has the world’s lowest fertility rate, is expected to see a sharp decline of almost 12% in its population as it falls to 46 million by 2050.

Changing world population trends like this can pose challenges for economies around the world, such as labor shortages, aging populations, and an increasing financial burden on younger generations.