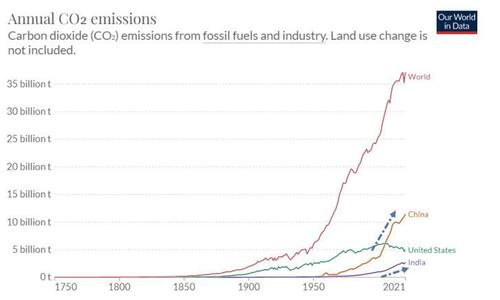 The Best Video On Climate Change That You Will Ever See

If you only play one video this year, the video below is the one you should play…

Annual CO2 emissions chart from Data in Our World.

This is an absolutely brilliant speech by British satirist, Konstantine Kisin.

Is Kisin’s Video For You?

If you think that you, president Biden, Gretta, Al Gore, or anyone in government will do anything that matters about climate change, the video is for you.

If you think that you, president Biden, Gretta, Al Gore, or anyone in government will not do anything that matters about climate change, the video is also for you.

Play the video then think about the lead chart and the path of China and India while noting the whole continent of Africa is not even on the scale.

By the way, the population of India will soon to surpass China.

Importantly, and on a personal level, the single best thing you can do for the environment is to not have kids.

I have been accused of being a climate denier. Mercy. Actually, I am a climate realist.

Climate change is real and constant and has been ever since the earth formed.

The debate is over how much is manmade and even more importantly, what to do about it, whether it’s manmade or not.

Regarding what percentage is manmade, I don’t know, nor does anyone else. But let’s say you disagree.

Then OK, I agree with you. Let’s assume recent climate change is 100% manmade. So what do we do about it?

That has been my line of questioning for a long time. I just have never been able to express my line of thinking as clearly as Kisin in the above video.

Assume there is a problem, then if there is a solution, it will not be the like of Gretta, AOC, Al Gore, president Biden, or the Green Party hypocrites who will fix it.

Look no further than the Big Green Mess in Germany for what happens when politicians are faced with the decision to heat homes cheaply or cut back on CO2.

The EU plans to tax other nations for not addressing climate change, while Germany bulldozes a town to increase the size of a coal mine. It’s also lignite coal, the dirtiest kind.

Vice Chancellor Robert Habeck, a Green who is Germany’s economy and climate minister, defended the agreement as “a good decision for climate protection” that fulfills many of the environmentalists’ demands and saves five other villages from demolition.

Meanwhile, the US is marching down an idiotic path towards electric vehicle mandates with no plan on where to get the minerals for the batteries. Nor does president Biden have an reasonable plan for the infrastructure needed.

“Without explicit congressional legislation, it would be inappropriate for us to use our monetary policy or supervisory tools to promote a greener economy or to achieve other climate-based goals. We are not, and will not be, a climate policymaker,” said Jerome Powell.

I am not one who often praises the Fed, but that paragraph deserves a standing ovation.

The hype is constant and has been consistently wrong. In 2019 I noted Ocasio-Cortez Says World Will End in 12 Years: Here’s What to Do About It

Yeah right. Politicians are going to give Africa, India, and third world countries trillions of dollars and tax the hell out of them if they don’t comply.

If there is a climate problem, science will find the answer, not politicians or activists.

For discussion, please see The Hope of Fusion vs the Pomp of Politicians and Climate Activists

Nonetheless, there’s A Mad Rush to Build More EV Factories despite the fact we have no idea or plan to secure the minerals needed for the batteries.

And Germany has turned to bulldozing towns to produce more coal.