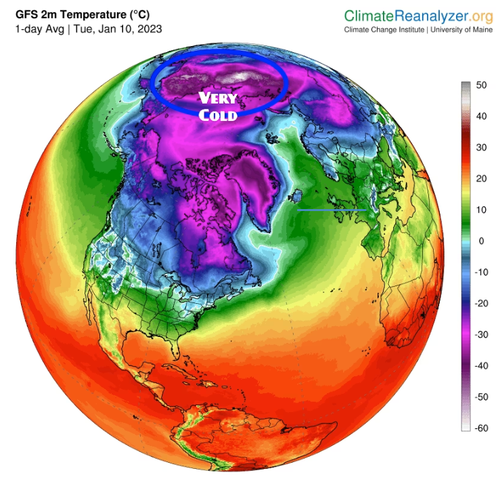 Siberia Records Minus-80 Degrees As Talk Of Polar Vortex Grows

Several weeks after the Christmas Arctic blast, much of the US and Europe have enjoyed record warmth. Recall on Dec. 27, we noted the cold air mass from Siberia that spread across the continental US would dissipate into the new year. So far, this is correct, as three weeks of above-average weather has staved off an energy crisis in the Northern Hemisphere. But just north, in Siberia, temperatures are sinking to near-record lows. And it could only be a matter of time before the giant cold air mass swirling in the North Pole becomes unstable, breaks down, and begins pouring into the US and Europe.

Global warming alarmists who called for an imminent climate disaster last summer are scratching their heads as the rural northern Siberian town of Zhilinda just recorded temperatures of minus-79.8 degrees, according to climatologist Maximiliano Herrera, who tracks extreme temperatures across the globe.

Herrera told The Washington Post that Zhilinda was just a few degrees off from breaking its record low of minus-82.3 degrees. The all-time low for the Northern Hemisphere was set in Russia in 1933 at minus-89.9 degrees.

Earlier this week, Arcfield Weather’s Paul Dorian said winter isn’t over and called for a significant change in North American weather “in about ten days or so.” Like anything, nothing is ever constant, and the warm spell could give way to colder temps later this month or early February.

“Although the eastern United States has had very mild weather since that late December cold blast, there is the potential for a significant pattern change toward the end of January.”

For a polar vortex to flow into the US or Europe, there first needs warming in the Arctic stratosphere that pushes cold air lower. As explained by Michigan Weather Forecast:

This begins with the warming in the Arctic stratosphere which pushes the cold air south (simply put). The GFS, GEFS, ECMWS, and GEM models are displaying similar model runs. This is more of a heads-up than anything else. Do with it as you will, it is my humble opinion that winter in the sense of cold and snow isn’t over yet. We will see if the CPC comes on board with this.

And on Twitter, many folks are posting models predicting winter isn’t over and all that cold air trapped in the Arctic could pour into Europe and the US in the coming weeks.

Up in the mid-upper Polar Stratosphere (20-30km above the Pole), there are signs the currently stronger than normal Polar Vortex will start to weaken/warm by end of Jan/early Feb. Details on this are still not clear yet, but how this pans out will be key for February’s weather! pic.twitter.com/gAJMgxAMHJ

For those who want a straightforward bottom line – #PolarVortex & tropospheric circulation are predicted to become increasingly coupled & supportive of more widespread #cold & #snow across the Northern Hemisphere in coming weeks but the important details are mostly still unknown. pic.twitter.com/7t7MO9nSPK

#natgas
It is impressive how fast the stratospheric vortex implodes by Jan29 (left) as warm air swallows the remains of a once mighty vortex (Jan9, right). This will reduce centrifugal forces and zonal winds, which will open the gates for polar air to flood continents. pic.twitter.com/mRRIAZHI7b

And maybe there’s some validity in the models above as the Climate Prediction Center’s 8-14 day temperature outlook has increasingly shown over the last week of colder weather slated for the end of the month.

So if the models are correct. Winter was just delayed, which would have big implications for natural gas prices that have been crushed in recent months due to mild weather.