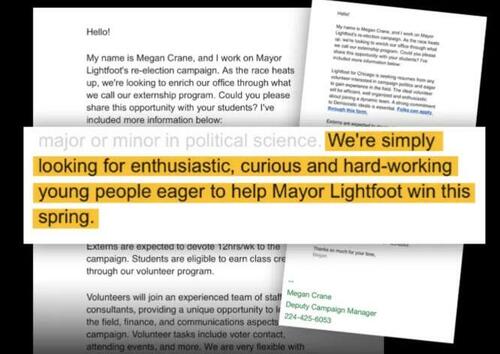 The email says participants in the “externship program” would be expected to contribute 12 hours per week to the Lightfoot campaign and students could earn “class credit.”

“We’re simply looking for enthusiastic, curious and hard-working young people eager to help Mayor Lightfoot win this spring,” according to an email obtained by WTTW News.

After WTTW News published details about the emails, generating a wave of criticism from other candidates in the race, Lightfoot’s campaign put out a second statement that said the campaign would “cease contact with CPS employees” out of an “abundance of caution.”

“All [Lightfoot for Chicago] campaign staff have been reminded about the solid wall that must exist between campaign and official activities and that contacts with any city of Chicago, or other sister agency employees, including CPS employees, even through publicly available sources is off limits. Period.”

As mayor of Chicago, Lightfoot appoints not only the superintendent of the Chicago Public Schools but also the members of the Chicago Board of Education. Chicago’s ethics ordinance prohibits the use of public resources, including email accounts, for non-official purposes.

If it’s a common practice Mayor, can we please see some other examples?

On the assumption that fraud, influence peddling, bribes and other corruption are indeed common in Chicago, what about your campaign pledge?

In the opinion poll from Fox 32, Garcia won 28 percent; Vallas was at 19 percent; Lightfoot was at 15 percent and businessman/philanthropist Willie Wilson was at 13 percent. Other contenders were in single digits.

Hoot of the Day

Lightfoot ran for mayor in 2019 on a platform promising to root out corruption at City Hall and toughen the city’s ethics regulations in an attempt to break the grip of the city’s “corrupt political machine.”

Lightfoot should be locked up, but won’t be. Nonetheless, you can kiss her goodbye. It’s a 9-person race and she will not be one of the final two.

But don’t expect anything in Chicago to improve, because it won’t. I suspect many of the other candidates are even worse. One is from the teacher’s union, guaranteed to be no improvement.