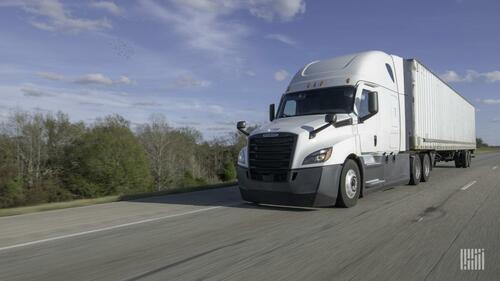 By Todd Maiden of FreightWaves

Freight costs fell year over year (y/y) in December for the first time in 28 months, according to a Thursday report from Cass Information Systems.

The Cass Freight Index report showed total expenditures on the payments platform were down 4.3% y/y and 5.5% lower than in November. The shipments component of the index recorded a 3.9% y/y decline, meaning actual transportation rates were likely 0.4% lower y/y during the month (down 2.2% sequentially and 5.3% seasonally adjusted).

The report said lower truckload contract rates were the main catalyst for the index’s decline during the month. The data set includes other transportation modes, like less-than-truckload, rail and parcel, and also captures fuel and accessorial charges, creating some noise in the numbers. Truckload accounts for more than half of freight expenditures on the platform.

“Freight rates are on track to fall 5% in 2023 just based on the normal seasonal pattern of this index,” ACT Research’s Tim Denoyer said. “With loose market conditions and some welcome relief in diesel prices, the actual decline is likely to be a good bit larger.”

With the fourth-quarter earnings season set to start next week, analysts have been dialing in expectations and picking likely winners and losers for the year. While some analysts have noted key indicators are slightly improving, the consensus is TL contract rates saw some pressure in the fourth quarter and will likely be down y/y by mid- to high-single-digit percentages at least through the first half of 2023.

However, most are pointing to firming fundamentals for carriers by midyear, resulting in a potential upcycle in the back half. The thesis is that persistent cost pressures on carriers, and regulatory impediments to capacity like AB5, will result in a steady exodus of operators, removing downward pressure on rates. Further, the weakness in demand and pricing evident in the third quarter appears to have accelerated during the fourth quarter, creating easier y/y comps for the group later this year.

While shippers may be beginning to see some savings, freight costs are still much higher than they were before the pandemic. Cass’ expenditures subindex was up 23% for full-year 2022, which followed a 38% increase in 2021.

“With a tougher comparison in January, this index is likely to turn down on a y/y basis,” Denoyer continued. “New truckload contracts are generally being renewed with considerable rate reductions, but this pressure will be partly offset by strong trends since Thanksgiving in spot rates, which have held most of their gains even as drivers have by and large come back from holiday break.”

Although he said the TL market was “transitioning from the late-cycle stage to the bottoming stage” and that tightening in the spot-contract spread is “a key signpost of this new stage of the cycle, even green shoots of a new rate cycle.”

Chart: (SONAR: NTIL.USA). The National Truckload Index (linehaul only – NTIL) is based on an average of booked spot dry van loads from 250,000 lanes and 10,000 daily spot market transactions. The NTIL is a seven-day moving average of linehaul spot rates excluding fuel. Spot rates have bounced from cycle lows in the back half of November. To learn more about FreightWaves SONAR, click here.Chart: (SONAR: NTIL.USA, VCRPM1.USA). The blue-shaded area is the NTIL (spot rates excluding fuel). The green line represents the seven-day per-mile average rate for dry van contract loads excluding fuel (reported on a 14-day lag).

Shipments were down 3.3% from November, but up 1.2% on a seasonally adjusted basis.

“Normal seasonality from here would have shipments back in positive territory y/y in 1H’23, but sharpening declines in imports, into the West Coast in particular, suggest near-term trends may soften further,” Denoyer said.

Data used in the Cass indexes is derived from freight bills paid by Cass, a provider of payment management solutions. Cass processes $37 billion in freight payables annually on behalf of customers.