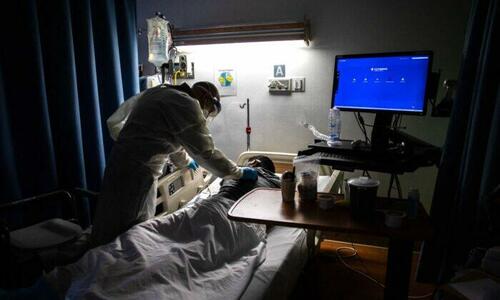 Authored by Douglas Eckenrood via The Epoch Times,

It is late 2024, and the special agent in charge of the COVID Misinformation Compliance Task Force begins her daily brief by disseminating a list of the days’ five targets to her team of ten sworn peace officers on special assignment from local law enforcement agencies.

The team reviews the targets’ criminal histories and firearm ownership records, takes note of logistical concerns, and employs a host of social media and “not to be mentioned” electronic data gathering tools. Warrants are confirmed and onsite surveillance is initiated, providing real-time information to the incoming arrest team.

The law enforcement team exits their vehicles at a safe distance and approaches the suspect’s location with caution. As the team makes its approach, verbal commands are given to the women and children entering and exiting the pediatric clinic to clear a path in front of the office door and vacate the area immediately.

After the team enters, clerical and medical staff are ordered to take seats and provide their doctor’s location. The doctor is located in the hallway between patient rooms, placed in restraints, searched for weapons, and immediately taken to the transport vehicle idling outside.

Witnesses state they could hear the doctor protesting loudly, “My license appeal is still under review!”

Of course you’re asking, “What the heck is this guy talking about?” Please, allow me to explain. Using the same perfect pitch that George Orwell used to author “1984,” the California State Senate authored another piece of legislation that summoned the intertwined spirits of Josef Mengele and Joseph Goebbels. As you may already know, the current Sacramento political lineup is the gift that keeps on giving.

2270. (a) It shall constitute unprofessional conduct for a physician and surgeon to disseminate misinformation or disinformation related to COVID-19, including false or misleading information regarding the nature and risks of the virus, its prevention and treatment; and the development, safety, and effectiveness of COVID-19 vaccines.

It defines misinformation as “false information that is contradicted by contemporary scientific consensus contrary to the standard of care.”

In a nutshell, if you are a doctor who deviates from the established CDC talking points or even attempts to assess and advise their patient as an individual, you may be guilty of COVID misinformation and thus be guilty of unprofessional conduct.

What are the potential penalties? Well, let’s just say that the student loan forgiveness plan won’t be helping you, as the $10,000 forgiveness limit won’t even cover the lab fees you incurred with your now worthless medical degree.

The Medical Board of California has been imbued with expanded authority to investigate, review, and refer for disposition to the State Attorney General’s Health Quality Enforcement Section’s office, complaints against “COVID misinformation.” The outcome of this completely vaporous virtue-signaling trope may include having your medical license pulled by the state, as well as exposure to fees and other sanctions. Don’t forget that this assault on the pursuit of the truth came out of a change in business code!

I hear you saying, “What’s this have to do with the dystopian scene above?”

Ah, good reader! Yes, what happens if you don’t comply and continue to practice medicine anyway?

Business and Professions Code 2052 nicely dovetails into the above by making this an arrestable offense with with the potential of a year in county jail.

I cannot possibly know the percentage of doctors who will either submit to a CCP-style tyranny or adopt skillful wordplay like 15th century astronomers wrestling with heliocentric revelations that the dominant church of their day forbid. But I can predict the number will not be zero.

Obviously I am not a doctor, but I do have a memory and do archive the articles I read, especially when I’m making medical decisions. I generally review the same sources that AB 2098 references when regarding consensus, for example the American Medical Association. The only consistencies I’ve seen surrounding COVID-19 and the “vaccine” are the consistent inconsistencies. Wait a week and it will change.

Remember the “protect grandma and get the jab” mantras? Or “do your part for herd immunity?” Now we learn that mRNA vaccination doesn’t accomplish either, and the new goal is “reduce severe illness and hospitalization.” I won’t mention some of the latest data regarding that claim, but it doesn’t look good. And I won’t speak more on the issue of defining the undefinable, because I run the risk of losing focus on the real problem. Sacramento power-hungry politicians have pulled off the ultimate gaslighting. We have been debating the way government is going to intercede in our lives rather than focusing on the fact that they don’t have the authority to do so.

The inherent desire for government to give itself additional authority is one of the reasons our Constitution and Bill of Rights were constructed the way they were. The founders made individual liberty the underpinning of much of their writing and have warned future generations to protect it at all costs.

Unfortunately, the California Legislatures’ penchant to rely on questionable medical “consensus” is nothing new. During the 1920s, California adopted “model laws,” in which law enforcement conducted the proactive arrest of women suspected to have sexually transmitted diseases—all in the name of public health. Literal law enforcement sweeps, arrests, and forced gynecological exams would happen with no probable cause needed.

California relied on the U.S. Attorney General’s published opinion that these proactive public health efforts were constitutional and that the public’s interest trumped individual liberty. One of the reasons that this unbelievable and sick overreach is even known is that during a particular morality sweep, of the 22 women arrested and inspected that day, two of the arrestees were sisters, one of whom was Margaret Hennessy. The wife of a Standard Oil manager, she was recovering from influenza and was out for some fresh air with her sister, which was a common practice in that day.

Mrs. Hennessy had the courage to go to the news media and let her outrage be known, which should be an example to all of us. California’s “morality policy” using public heath concerns to expand the power to investigate, detain, and arrest individuals was illegal then and is still illegal now.

The first step in combating authoritarian overreach is not debating what or why they are doing something. It’s making the government identify where their authority to impose a mandate or new law comes from and then impose the constitutional test. You already know the answer, don’t you? They don’t have the authority to do what they are doing.

Since 1850, California has suffered through innumerable attempts to exceed its own constitutional authority, not to mention the Constitution of the United States. Historically, we seem to work things out and get as close to what’s right as possible. However, I’m afraid that much of today’s public has forgotten what freedom looks like and is suffering from Stockholm Syndrome.