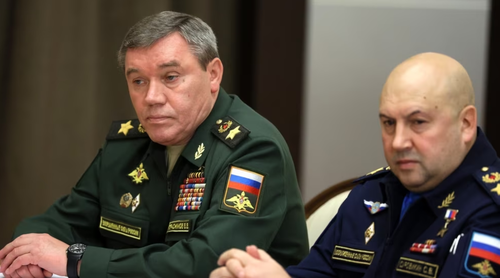 It was only three months ago that the Kremlin named General Sergei Surovikin to head up Russia’s “special military operation” in Ukraine, which President Putin has since admitted is in fact a “war”.

He’s already been sacked, as on Wednesday the Russian Ministry of Defense (MoD) announced that Valery Gerasimov, who is head of the general staff of the Russian Armed Forces, is taking over the reigns of the operation.

Kremin.ru: Valery Gerasimov (left) replaces Sergei Surovkin, who was appointed to the post three moths ago.

Surovikin will now serve as one of Gerasimov’s deputies, effectively a demotion. A MoD statement cited the “need to organize closer interaction between the branches and arms of the Armed Forces” in his appointment, and to improve the support and effectiveness of “command and control of groupings of troops,” as cited in Axios.

According to a brief summary of Gerasimov’s bio (already a familiar face among top Kremlin leadership, and as Putin’s longtime military right-hand) in Sky News:

Sitting at the right hand of Vladimir Putin, he was one of only three people – including the president himself and the defence minister – who were in charge of plotting the invasion of Ukraine.

Back in May, he reportedly visited the frontline in the eastern Donbas region – as troops were apparently suffering from low morale and heavy losses.

Interestingly, Surovikin’s October appointment was intended to reverse a tide of setbacks for Russian forces in the east and south of Ukraine, as it struggled to control territory that Moscow is seeking to annex politically, especially after it held ‘popular referendums’ in late September.

Many of the latest major setbacks, particularly the Russian forces’ withdrawal from Kherson, took place under Surovikin’s leadership.

However, one prominent military analyst and commentator noted it could be more of a reshuffling for political reasons and not because Surovikin is fundamentally being viewed as a failure…

I don’t think this is because Surovikin is viewed as a failure. Certainly possible that this was driven by political reasons. As the unified commander in Ukraine, Surovikin was becoming very powerful and was likely bypassing Shoigu/Gerasimov when talking to Putin.

At the same time, the private military firm Wagner Group, which has ties to Putin, has touted some of its own successes, sparking distrust and friction with the official military command structure.

Gerasimov’s tenure was marked by an uptick in Russian air power targeting Ukraine’s national energy grid, in what’s now become an openly stated strategy to degrade and destroy the war-ravaged country’s power grid and resources. Ukraine has meanwhile been claiming that Moscow is readying a massive new mobilization of some 500,000 additional troops.