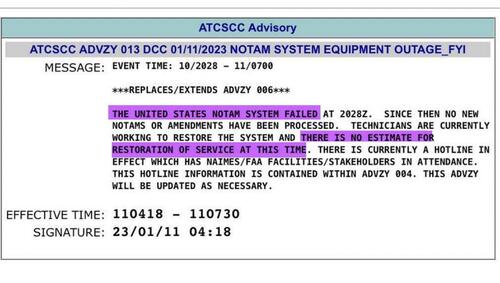 Flights Across US Affected After FAA Computer System “Failed”

Early Wednesday morning, the US Federal Aviation Administration’s (FAA) system that notifies pilots about hazards or any changes to airport facility services suffered an outage that might result in a nationwide grounding.

The FAA wrote in an advisory update that its NOTAM (Notice to Air Missions) system had “failed.” The aviation agency provided no immediate estimate for when it would return online.

“THE FAA is experiencing an outage that is impacting the update of NOTAMS. All flights are unable to be released at this time,” the FAA said in a statement.

In a statement to NBC News, the FAA said, “Operations across the National Airspace System are affected.”

So far, 1,162 flights have been delayed within, into, or out of the US, flight tracking website FlightAware showed. Another 94 were canceled.

Flights are being grounded nationwide.

Just an FYI if you are planning to fly today (as I sit on a plane I boarded at 5am), FAA’s NOTAM system is down and basically all planes within and coming in and out of the U.S. are grounded. Our pilot says they have no idea when it will be functioning again. So. pic.twitter.com/4iW11Ns2vr

BREAKING NEWS: 🚨🚨
Dozens of flights have been delayed at Charleston International airport due to a FAA computer malfunction.
We haven’t seen any flights leave Charleston in the past 40-45 minutes.
Tune into @ABCNews4 for the latest updates #Working4You pic.twitter.com/kcZugsJaqo

It’s probably not a good time to fly this morning.

#Breaking: Flight delays reported across U.S. after #FAA computer outage. Here’s what we know at the moment: pic.twitter.com/y8uN8CG1oV

Passengers are beginning to complain on social media about canceled flights.

FAA computer outage has grounded flights nationwide this morning. Boarded at 5:30AM as the first flight of the day. Currently delayed indefinitely. Idk if I’ll be making this cruise out of Florida… 😢🌴🚢 pic.twitter.com/SBy8q2sD2N

FAA outage also affecting flights abroad. Our flight from FCO – PHL is halted on the runway.

The FAA has grounded all flights due to a computer outage. Sitting on a plane @EWRairport on @UnitedAirlines pic.twitter.com/Rlq5OBmiJd

Sitting in DCA, they just told us there is a nation-wide FAA outage. No flights are moving anywhere. Anyone have any clue what’s going on?

@AmericanAir I’ve been sitting on a full plane at the gate at LAX for 2+ hours for a system issue with the FAA. When will this be resolved? #flightdelay