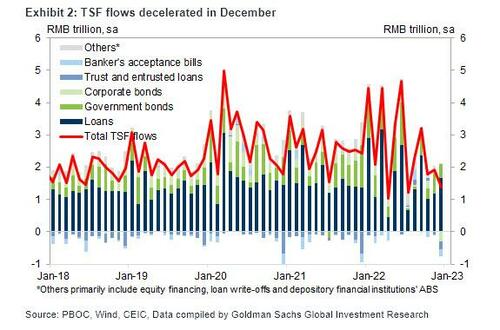 China’s Credit Flood Is Coming, But December Was A Disappointment

Last week, when discussing the end of China’s “three red lines” policy to coincide with the premature end of China’s zero-covid policies, a policy U-turn which will have staggering consequences on the world’s biggest asset bubble and China’s economy, we said that “what China’s reversal means for the rest of the world is that a tidal wave of new credit is about to be unleashed, and as a recent report in Economic Information Daily said, the amount of new credit China issues is likely to reach another record high this year, while interest rates for longer-term loans could decline further. In other words, prepare for a surge in Chinese Total Social Financing as Beijing finally ends its latest experiment with austerity and is finally set to unleash the biggest credit expansion in history.”

And it will… but not just yet because while we expect a deluge of new Chinese credit (forced or otherwise) to flood the country – and then the world – in 2023, the last month of 2022 was a damp squab, with the PBOC reporting December credit data that was mixed at best.

On one hand, total RMB loans surprised the market to the upside and showed broad-based improvement – both mortgages and corporate medium to long term loan growth increased in December. According to Goldman, Beijing’s property policy easing after the “16 measures to support the property sector” and the accommodative monetary policy stance (the PBOC delivered the 25bp RRR cut in early December) likely both contributed to the acceleration in RMB loan growth.

On the other hand, total social financing and M2 growth missed expectations and decelerated materially from November. Very weak corporate bond net issuance due to the bond market repricing around wealth management product redemption and liquidity concerns dragged down overall total social financing growth. The deceleration in M2 growth was likely due to the dissipation of one-off factors (PBOC stated that commercial banks converted some FX to RMB – and maybe gold – in November) and smaller balances of PSL. In addition, PBOC and CBIRC jointly held a meeting with major policy and commercial banks today (January 10th), urging banks to strengthen financial support to the real economy, and in particular to the property sector.

Here are the details:

And the main points, courtesy of Goldman:

1. December total social financing (TSF) came in below market expectations. The sequential growth of TSF stock decelerated further to 4.8% mom sa annualized in December from 5.5% in November, and in year-on-year terms, TSF stock growth decelerated to 9.6% from 10.0% in November. Among major TSF components, new CNY loans rose after seasonal adjustment, while corporate and government bond net issuance, shadow banking credit slowed. Trust loans, entrusted loans and discounted bankers’ acceptance bills combined contracted by RMB 452bn in December, vs a contraction of RMB 116bn in November. Corporate bond showed net redemption of RMB 288bn, vs net issuance of RMB 15bn in November. Expect most of these categories to accelerate notably in 2023.

Bottom line, the December loan and credit data was at best mixed. The acceleration in bank loans reflected policy support – commercial banks extended more loans to property developers after the “property 16 measures”, and policy banks’ credit facility targeting at infrastructure investment in recent months likely also added to overall RMB loan growth. On the other hand, TSF growth was weak and decelerated in December. Bond market volatility due to liquidity concerns and wealth management product redemption – which was catalyzed by the fears over Zero-Covid transition – reduced bond net issuance and potentially also dragged down shadow banking credit. The decline in corporate bond net issuance and the contraction in shadow banking credit more than offset the increase in RMB loans.

That said, in today’s (January 10th) meeting with major policy and commercial banks, PBOC and CBIRC reiterated their accommodative stance and pledged to strengthen financial support to the real economy and in particular to the property sector. As such, the broad credit growth will almost certainly accelerate in early 2023 from the very low sequential growth in December 2022. High frequency activity indicators showed signs of stabilization, and nationwide Covid infections peaked in late December last year to early January this year. The recovery of broad activity growth could also add to credit demand and help with a rebound in overall credit growth in early 2023.