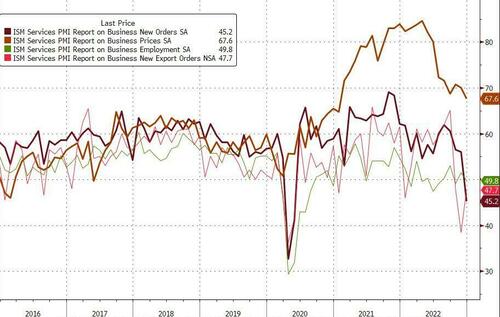 US Stocks Prefer Big Bad Wolf Of Recession To Goldilocks

US stocks are trading positively since Friday’s US data due to raised hopes for rate cuts, not on some Goldilocks narrative. It’s important the driver is clear as there are different implications.

The NFP jobs data was indeed a so-called Goldilocks report: an increase in the labor force and lots of new jobs added, particularly in the private sector. Wage inflation not only fell sharply, but with the bonus of revisions lower to prior wage increases. For those who believe that the US can bring inflation back down to target without a hard landing, it was about as good as you could get. It suggests that the economy can cope with the policy-tightening seen, so it should have resulted in curve-steepening and equities getting a bid. And that’s exactly what we got… BOOM! All makes sense.

But wait… We then got the big bad wolf of the ISM report. It was horrible data. The headline came in at 49.6 (recession territory) versus 55 forecast, and 56.6 prior. The new orders component was even more traumatic at 45.2 versus 56 prior. Not helped by the fact that the more backward-looking factory orders data released at the same time missed expectations and revised the prior figures lower too. Oh, and the final durable good print was slightly softer, as well. Recession alarm bells blaring loudly. The bit of the ISM report that stayed very high was the prices paid component — uh-oh, stagflation sounds?

So you’d think that stocks would hate that? No! Quite to the contrary, S&P 500 e-minis only rallied 0.6% on the Goldilocks NFP jobs data, but then managed a further 1.8% before Friday’s close on the stagflationary ISM report, while the dollar slumped.

What gives? Well, US 2-year yields collapsed by a further 16 basis points after the ISM report, and it was that hope for easier monetary policy that fueled stocks. Which is fine in isolation, but does undermine any suggestion that Friday’s moves were about a Goldilocks scenario.

It also means that, if you’re wondering what would upset stocks most in the short-term, it’s anything that undermines the prospect of easier policy, more so than data that confirms a US recession. Personally, I think they probably should fear a recession too, but that’s a story for another month.