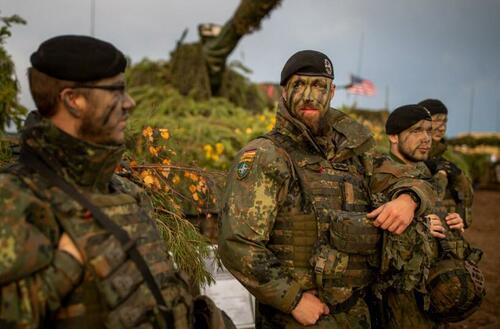 Close to 1,000 actively serving members of the Bundeswehr refused military service last year following the outbreak of the Russo-Ukrainian conflict.

In total, Germany’s Federal Office for Family Affairs and Civil Society Functions received 951 applications for conscientious objection among serving members of the Bundeswehr in 2022.

“In 2021, we received 201 applications for conscientious objection,” a spokesperson for the federal office told German news outlet RDN on Friday.

According to a report by the office, many applicants justified their objection to military service on the basis that they simply were not expecting military confrontation in Europe during their given service time.

The German army is not actively mobilized or involved in the conflict between Ukraine and Russia, but the conflict on Europe’s doorstep has seen numerous allied nations provide armaments and military support to Kyiv.

On Thursday, the German government announced it will supply Ukraine with Marder infantry fighting vehicles (IFVs) and one Patriot missile defense system in a show of solidarity with Ukrainian President Volodymyr Zelensky’s troops.

“Soldiers who come to the conclusion in these explosive security times that they do not want to shoot and kill or injure other people must be offered an easy way out of the army,” Michael Schulze von Glaßer, the political director of the German Peace Society, told RND.

Meanwhile, Germany’s Federal Defense Minister Christine Lambrecht (SPD) has called for greater numbers of women and migrants to be recruited for military service, according to German news outlet Junge Freiheit.

Her comments, which were also quoted in Der Spiegel on Friday, follow an announced investment of over €40 billion in the infrastructure of Germany’s armed forces over the next decade.