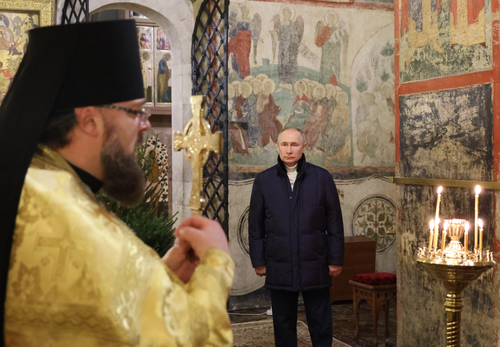 Putin’s short-lived Christmas ceasefire has already come and gone, perhaps lasting but a few hours on Friday. On Saturday, Christmas day for Ukrainian and Russian Orthodox, widespread shelling along the line of contact has reportedly resumed.

Putin attends the Orthodox Christmas service at the Kremlin in Moscow, Russia on January 7, 2023. Kremlin/EPA

Some eyewitnesses are saying there was sporadic shelling from the very start of what was supposed to be a pause in fighting: “But AFP journalists heard both outgoing and incoming shelling in the frontline city of Bakhmut in eastern Ukraine after the time when the Russian ceasefire was supposed to have begun.”

In particular Kreminna and other places in hotspots across Donetsk and Luhansk have witnessed exchanges of fire, also with Al Jazeera, Sky News, Reuters and other international outlets that have been closely following Ukraine battlefield developments reporting the same.

Ukrainian authorities in Kherson have reported multiple civilians wounded and an emergency worker killed, while Bakhmut and nearby Krasna have reported casualties. Fighting has resumed in Kharkiv, Sumy, Mykolaiv and Zaporizhzhia, reports Sky News.

Major Western media outlets on Saturday are uniform in blaming Putin for his forces breaking the ordered unilateral ceasefire. But importantly, it should be noted that these same outlets typically have relied almost entirely on the perspective and claims of Ukrainian officials and military commanders.

From the start of when the Christmas ceasefire was announced on Thursday, it was treated with widespread skepticism by Ukraine’s Western allies. Kiev authorities rejected it as a “cynical ploy” and a “trap” in order for Russian forces to regroup and buy more time against the Ukrainian counteroffensive. Ukraine vowed to not observe it from the very start, which makes current claims that it is Russia breaking the ceasefire suspect at best.

Unlike previously when he attended large cathedral services, Putin observed Christmas services alone this year in the presence of Russian Orthodox clergy…

1. Putin is still a great master of signs and symbols. And yesterday’s visit to the Christmas service in the Kremlin’s Annunciation Cathedral is yet another proof of this.
This temple is the home church of all the great princes, kings who lived in the Kremlin and one of the pic.twitter.com/ic3sK3nEPX

The Biden administration and Pentagon also suggested it was fake and a ruse. But it remains for multiple hours on Friday there were no major battlefield incidents or large-scale strikes, despite claims of sporadic shelling.

It seems the ceasefire attempt was treated as essentially ‘dead on arrival’ by the West simply because it was Putin proposing it. And yet, the very same countries have urged for Russia to silence its weapons and halt the advance of its forces from the beginning. One thing this holiday ceasefire attempt did highlight is that the possibility for a more permanent peace now seems more distant than ever. It demonstrated also that given the opportunity, the West didn’t treat the idea of a pause in fighting seriously at all; it wasn’t even so much as considered an ‘opening’ for dialogue.