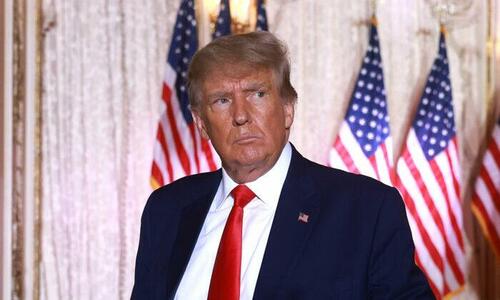 Authored by Tom Ozimek via The Epoch Times,

Former President Donald Trump said on Jan. 5 that if he’s successful in his bid for the presidency in 2024, he will order the U.S. military to crush Mexican drug cartels and show them “no mercy.”

Trump made the announcement as President Joe Biden was preparing to make his first visit to the U.S.–Mexico border since taking office.

In a video statement on Thursday, Trump blamed “Biden’s open border policies,” which he called a “deadly betrayal of our nation,” for fueling drug-related deaths among Americans.

Illegal immigration has soared under Biden’s watch, with unauthorized crossings exceeding 2.3 million in fiscal year 2022, according to Customs and Border Protection data. That figure topped the previous record by around 1 million and was more than twice the highest level recorded under Trump.

Trump, who previously suggested using U.S. military force against drug cartels operating south of the border, including by reportedly launching missiles into Mexico to destroy drug labs, said in Thursday’s video that deadly narcotics like fentanyl are pouring “across our wide open border” and are “stealing hundreds of thousands of beautiful American lives.”

Drug cartels are “waging war on America,” Trump continued, adding that the time has now come “for America to wage war on cartels.”

Trump claimed he would designate cartels as foreign terrorist organisations and block their access to the global financial system, while asking Congress to pass laws that would punish drug smugglers and human traffickers with the death penalty.

“When I am president, it will be the policy of the United States to take down the cartels, just as we took down ISIS and the ISIS caliphate—and just as, unlike the situation we are in today, we had a very, very strong border,” Trump said.

The former president said he would deploy all necessary military assets, including the U.S. Navy, to impose a naval embargo on cartels and make sure they can’t use regional waters to smuggle drugs into the country.

Further, he would “order the Department of Defense to make appropriate use of special forces, cyber warfare, and other overt and covert actions to inflict maximum damage on cartel leadership, infrastructure, and operations.”

“Millions and millions of families and people are being destroyed. When I am back in the White House, the drug kingpins and vicious traffickers will never sleep soundly again,” Trump said.

“We did it once, and we did it better than anybody else.”

Trump says he will use the full force of the military to crush the drug cartels: pic.twitter.com/7tFrmHmMES

Trump’s remarks came as Biden announced steps that he said would improve border security and help stem the flow of illegal immigration while expanding a parole program that opens a legal pathway for tens of thousands of people a month to enter the United States lawfully.

‘Do Not Just Show Up at the Border’

Biden said at a White House press briefing Thursday that the United States would start turning away Cubans, Haitians, and Nicaraguans who cross the U.S.–Mexico border illegally. That move builds on an existing effort to stop Venezuelans from trying to enter the United States without authorization.

“Do not just show up at the border,” Biden said.

“Stay where you are and apply legally from there.”

While seeking to block illegal crossings by Cubans, Haitians, Nicaraguans, and Venezuelans, the Biden administration is also expanding a parole program that allows 30,000 people from those four countries per month to enter the United States legally for two years and work.

Most of the people crossing the U.S.–Mexico border illegally in recent times are from those four countries.

“We anticipate this action is going to substantially reduce the number of people attempting to cross our southwest border without going through a legal process,” Biden said, adding that Mexico has agreed to take back up to 30,000 people a month who get caught trying to cross the border illegally.

People gather near a crossing into El Paso, Texas, as seen from Ciudad Juarez, Mexico, on Dec. 20, 2022. (Christian Chavez)

Another part of the new effort is letting people who are seeking to enter the United States schedule an appointment at a port of entry to start a claim for asylum.

Most asylum claims are ultimately rejected, but a major backlog in the courts leaves most illegal aliens living in the country for years before their case is adjudicated. Some people aren’t deported even if their claims are denied.

The Biden administration is also sending more asylum officers and judges to the border to try to adjudicate the cases more quickly. The aim is to reduce the initial processing time from months to days.

“We can’t stop people from making the journey, but we can require that they come here in an orderly way under U.S. law,” Biden said.

The administration also plans to increase funding for border communities impacted by the surge in illegal immigration.

The actions “will make things better but will not fix the border problem completely,” Biden added, blaming Congress for not approving a plan he proposed to reform the immigration system.

“This new process is orderly,” Biden said. “It’s safe and humane, and it works.”

Biden made the remarks ahead of a planned visit to El Paso, Texas, a border town that has been at the forefront of the illegal immigration surge, having become the busiest corridor for illegal crossings.

Over the past week, border agents have encountered an average of 1,731 illegal aliens a day in a 268-mile stretch of the border known as the El Paso Sector, according to figures published by the city.

At the same time, there was an average of 3,410 people daily in Border Patrol custody over the past seven days.