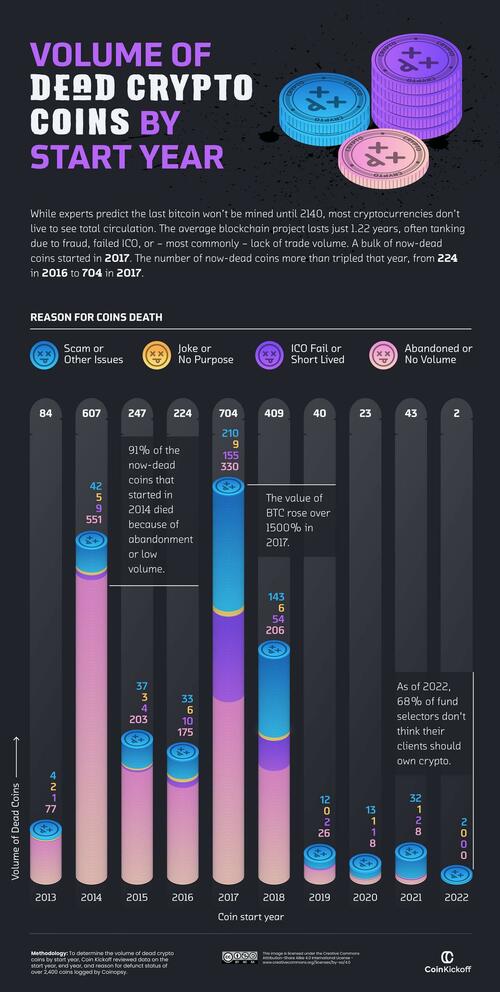 91% Of Cryptos From 2014 Have Died, While Bitcoin Continues To Thrive

Authored by BTCCasey via BitcoinMagazine.com,

A recent report by CoinKickoff demonstrates the failures of various altcoin projects throughout the years, and how bitcoin is the standout survivor.

According to their data, 91% of the coins that were present for the 2014 cryptocurrency market crash are now entirely abandoned. A large portion of coins that are now dead were created in 2017, with 704 now-dead coins being created that year. The crown for the single most deadly year in cryptocurrency history goes to 2018, during which 751 coins became defunct.

A visualization created by CoinKickoff illustrates just how many of these projects came and went, along with their respective reasoning for failure. Reasons include being a scam or other related issues, being a joke or having no purpose, being an ICO or short-lived scheme, or simply running entirely out of volume.

Bitcoin, in the midst of all this, has remained strong. Hash rate has continued a steady climb, now up to 270 EH/s according to Hashrate Index.

In addition, more than 1 million addresses now hold one bitcoin or greater, although it should be noted that Bitcoiners may use multiple addresses. Beyond that, over $14 trillion in annual transaction volume was carried over the Bitcoin network the past year, a 13,900% increase from 2015’s transaction volume.

And just as those metrics grew, the amount of bitcoin held on exchanges reached new lows, indicating that more Bitcoiners than ever are holding their coins in a sovereign way.

Metrics continue to demonstrate that, aside from the price of bitcoin, the network itself is continually growing, while altcoins which hope to ride on its coattails simply have no longevity. Bitcoin has proven its resilience by continuing on in the face of existential attacks like the Blocksize Wars, political challenges like the story of Silk Road and major exchange collapses like that of Mt. Gox or more recently, FTX. Even major hits to the network such as the drop in hash rate after China’s mining ban have proven to be simply speed bumps on Bitcoin’s path to dominance. These events only strengthen the narrative of Bitcoin as sovereign monetary policy built upon a network that is resistant to collapse.