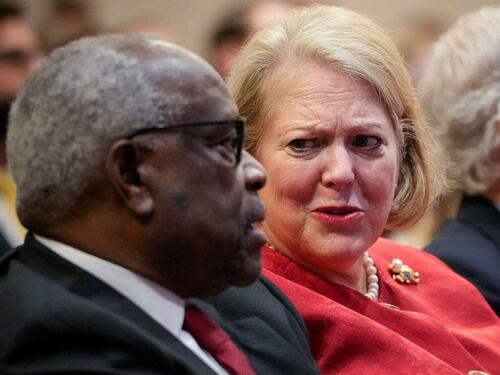 Nothing But Rage: The Ginni Thomas Investigation Ends Without A Mention In J6 Report

Below is my column in the New York Post on J6 Committee report and the conspicuous absence of any mention of Ginni Thomas, the wife of Clarence Thomas. Despite calls for the impeachment of Justice Thomas and criminal charges against the couple, the Ginni Thomas “scandal” seemed to evaporate with nary a mention in the report or the press.

Here is the column:

The Jan. 6 committee issued its long-awaited report at 2022’s end, with the expected breathless punditry. Spoiler alert: It turns out the culprit of this “whodunit” was … wait for it … Donald Trump.

What’s more interesting is the dog that did not bark.

In Sir Arthur Conan Doyle’s story “Silver Blaze,” the local inspector asks Sherlock Holmes, “Is there any other point to which you would wish to draw my attention?” Holmes responds, “To the curious incident of the dog in the night-time.” When the inspector objects, “The dog did nothing in the night-time,” Holmes replies, “That was the curious incident.”

In the 895-page report, the “curious incident” is the lack of any reference to Ginni Thomas, Justice Clarence Thomas’ wife. For months, members, the media and an army of pundits hammered away at the “smoking gun” texts Thomas sent to Trump chief of staff Mark Meadows and others calling the election stolen and demanding challenges to certifying the electoral votes.

Rep. Ilhan Omar (D-Minn.) was the first member of Congress to call for Justice Thomas to be impeached over his wife’s 29 messages. Rep. Bill Pascrell (D-NJ) called for Thomas to resign immediately as a “corrupt jurist.”

Former Sen. Barbara Boxer and others joined these calls. (Boxer was particularly ironic since she used the same underlying federal law to challenge the certification of George W. Bush’s election.) Sen. Sheldon Whitehouse (D-RI) demanded an investigation. On the committee itself, Rep. Adam Schiff (D-Calif.) fueled the frenzy and demanded subpoenas for both Thomases.

The media also went into hyperbolic overload. Liberal sites demanded Thomas be impeached, citing “watchdogs” who turned out to be the same crowd that has long denounced the justice.

MSNBC’s Mehdi Hasan tweeted, “I have a question for Speaker Nancy Pelosi and House Democrats: Why haven’t you impeached Clarence Thomas yet?” CNN and MSNBC commentator Tristan Snell tweeted that the couple had to be subpoenaed: “At best, they are material fact witnesses. At worst, they are co-conspirators to be charged with seditious conspiracy.” Professor Laurence Tribe (who declared Trump should be charged with attempted murder) also demanded the justice and his wife be subpoenaed.

MSNBC’s Zeeshan Aleem declared in June that the scandal “keeps getting worse” but “the silver lining is that it will likely intensify calls for overhauling the high court, and help strip more people of the illusion that the Supreme Court is an apolitical branch of government and a neutral arbiter of the law.”

Activists like Sarah Lipton-Lubet, Take Back the Court Action Fund executive director, declared that “there’s much more to the story of Ginni Thomas’ participation in the January 6 attack that the House Select Committee and the American public deserve to know.”

Yet it turns out what we knew was largely all we needed to know. There was not “much more to the story.” The entire Ginni Thomas scandal merited nary a mention in the massive report.

Indeed, it doesn’t appear the committee had anything more than what we knew when the controversy began. The texts were never denied, and they weren’t surprising since Ginni Thomas was publicly supporting Trump and his claims. She was willing, moreover, to answer the committee’s questions voluntarily.

We’ve come a long way from the days when spouses were viewed as mere extensions of their husbands. Ginni Thomas is an activist, and the couple has often discussed how they keep their professional lives apart.

Of course, when some of us suggested Ginni Thomas has a protected right to such views and communications, we were denounced as apologists or sympathizers to an “insurrection.”

For her part, as The Post reported, “Thomas said that her husband only found out about her texts with Meadows from media reports as he lay in hospital bed recovering from an infection in March 2022.”

In reality, there were press reports before that. The House received 29 texts between the pair from November 2020 to mid-January 2021 in the 2,320 messages Meadows gave the committee. The press reported Meadows’ turnover in December 2021.

That, however, does not change the fact there was nothing in this controversy that warranted the breathless coverage or, in my view, a subpoena issued to the spouse of a sitting justice.

Politicians and pundits suggested Thomas could be impeached because he voted on a challenge to the committee obtaining White House messages and emails. In January 2022, the House won an 8-1 victory before the Supreme Court, which rejected Trump’s privilege objections to the materials’ release. There was only one dissenting vote: Thomas.

Yet Ginni Thomas’ texts had already been turned over to the committee by then, and she testified she never told her husband about her communications.

Likewise, there was no evidence that she ever encouraged violence or was even present at the Capitol riot. Thomas said she attended the Ellipse rally Jan. 6 but left early, before Trump spoke, and never went to the Capitol.

In the end, the committee did not take the advice of Schiff, Tribe, and others. It did not subpoena Justice Thomas. It did hear from Ginni, who voluntarily testified for four hours. Again, while the committee released her transcript, it did not find that she merited a single reference in the 895-page report.

The media that pushed this exaggerated story for months followed the familiar pattern. They just shrugged and barely covered the fact the committee found nothing beyond what some of us had previously noted: Ginni Thomas was a longstanding Republican activist who publicly supported Trump’s claims of a rigged election.

She now regrets sending Meadows messages and described the days following the election as an “emotional time.”

Now the entire investigation of Ginni Thomas ended as it began: as a largely recreational exercise. It did prove one thing. What many people in this age of rage refuse to admit is that they like it. Rage is addictive. It releases you from any obligations of fairness or balance. Ginni Thomas’ targeting was just another cathartic “curious incident” in the J6 investigation.