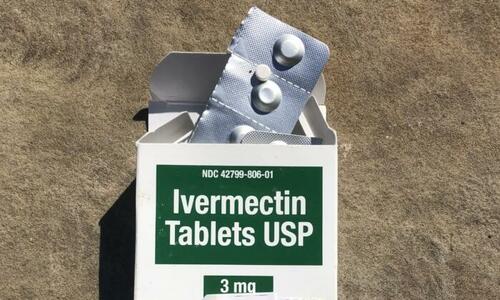 Authored by Katie Spence via The Epoch Times (emphasis ours),

Dr. Yusuf Saleeby has practiced medicine for more than 30 years. He serves patients in South Carolina and until recently had never faced an investigation from his state medical board.

But after Saleeby started prescribing ivermectin to his patients, he was reported to the board, which opened an investigation, despite the state’s attorney general’s promise that his office wouldn’t prosecute doctors who prescribed off-label medications.

Jennifer Wright, a nurse practitioner and clinical director who practices in Florida, but can prescribe across state lines, told The Epoch Times she received a letter from the Office of the Attorney General of New York ordering her not to prescribe ivermectin.

“You know, basically threatened me. If I don’t stop prescribing, then they’re going to fine me,” Wright said about the letter, which threatened legal action with fines of up to $5,000 per violation.

The letter stated that the Food and Drug Administration only authorized ivermectin for use in humans when treating “parasitic worms and head lice and skin conditions like rosacea.”

The citation in the letter appears to be from an FDA advisory issued in March 2021 titled “Why You Should Not Use Ivermectin to Treat or Prevent COVID-19.”

That advisory and other anti-ivermectin messaging from the FDA are now the subject of a lawsuit brought by three doctors against the agency. The doctors argue that the FDA illegally interfered with their ability to treat patients. The suit was dismissed but an appeal has been filed by the plaintiffs.

During a hearing in 2022, attorneys defending the government argued that the agency’s missives were just a recommendation.

“They did not say it’s prohibited or it’s unlawful. They also did not say that doctors may not prescribe ivermectin,” Isaac Belfer, one of the lawyers for the government, said during a Nov. 1, 2022, hearing in federal court in Texas.

The government’s arguments differ greatly from the reality many doctors faced for prescribing ivermectin. Some lost their jobs, others were investigated by state medical boards, and many received threats from the New York attorney general because they were prescribing across state lines.

Matthew Dark, a spokesperson for Roots Medical and Colorado Healthcare Providers for Freedom, which has more than 275 physicians in the group, stated that several doctors in Colorado are facing investigations by the state medical board.

When asked about the FDA’s new claim, Dark stated: “They knew it was safe for humans, and they made that very accusatory thing if you were a doctor prescribing this, you were an idiot. You were practicing like a hillbilly. So that message was loud and clear.”

Dark referred to Twitter posts from the FDA, one of which said: “You are not a horse. You are not a cow. Seriously, y’all. Stop it.”

“Pharmacies were responding to the practice and providers trying to write [ivermectin] the same way the FDA was behaving,” Dark said.

Wright concurred, and pointing to her letter from the New York attorney general, said, “It clearly states in this letter that according to the FDA, you must cease and desist in prescribing ivermectin to New York State residents.”

Dr. Miguel Antonatos, a board-certified internal medicine physician who practices out of Illinois, but can prescribe to other states, told The Epoch Times via email that he, too, received a letter from the New York attorney general.

Nicole Sirotek is a registered nurse and founder of American Frontline Nurses, a patient advocacy network that boasts 22,000 nurses. She told The Epoch Times that her nurses often work with doctors in hospital settings.

At the height of the pandemic, Sirotek said patients would reach out to her advocacy network and beg for ivermectin, either for themselves or their loved ones dying in the hospital.

She stated that in five separate instances, doctors were fired or forced to resign for prescribing ivermectin as a home medication for nurses to administer in hospitals.

Julie McCabe, a registered nurse and director of advocacy services for American Frontline Nurses, told The Epoch Times that the above doctors include Dr. Edith Behr in Pennsylvania, Dr. John Witcher in Mississippi, Dr. Mary Bowden in Texas, Dr. Robert Karas in Arkansas, and Dr. Paul Marik in Virginia. Bowden and Marik are two of the three doctors suing the FDA over its stance on ivermectin.

Bowden told The Epoch Times that Houston Methodist Hospital suspended her for merely writing on Twitter about ivermectin, and she had to overcome “numerous obstacles” when prescribing it to patients.

“The FDA was the key creator of these hurdles when it launched a social media campaign stating that ivermectin is dangerous and only for horses. When faced with a lawsuit, the FDA now claims it was merely making suggestions—suggestions that have threatened my ability to practice medicine and more importantly, interfered with life-saving early treatment of COVID patients,” Bowden said.

Sirotek said members of the group Team Halo targeted her because of her stance on ivermectin. The group describes itself as “volunteer scientists and healthcare professionals from around the world, working to end this pandemic by contributing our time to address concerns and public health misinformation.”

Members of the group filed several complaints to Nevada’s state medical board, which Sirotek said costs her $5,000 per complaint to fight.

With tears streaming from her eyes, Sirotek said she’d also received death threats, pictures of her house, and threats to murder her children. Sirotek provided copies of these threats to The Epoch Times. Team Halo didn’t respond to a request by The Epoch Times for comment.

A sign for the U.S. Food and Drug Administration outside of its headquarters in White Oak, Md., on July 20, 2020. (Sarah Silbiger/Getty Images)

In the spring of 2020, with COVID-19 spreading like wildfire through the population, finding a viable treatment was paramount in many doctors’ minds. And as no drug was approved to treat the novel virus, they turned to off-label use, a standard medical practice even in non-pandemic times.

In March 2020, a group of leading critical care specialists joined forces and formed the Front Line COVID-19 Critical Care Alliance (FLCCC). Their mission was to examine different therapies and drugs and recommend possible COVID-19 treatments based on best medical practices and emerging data.

Almost immediately, ivermectin was put forward as a possible treatment. First approved for human use in 1987 and dispensed billions of times since then, ivermectin is traditionally prescribed to treat parasites. But it’s safe and was already known to have an effect on viruses.

“This is a medication that is safer than Tylenol, safer than stuff we sell over the counter,” Wright said.

“[Ivermectin is] probably one of the most prescribed drugs. It’s given out like candy in Sub-Saharan Africa and Amazon basin or anywhere around water. … It’s doled out to children and pregnant women. … As far as safety, it’s probably safer than baby aspirin. It’s probably the safest drug on the planet, to be honest.

“I was using [ivermectin] sporadically in some of my Lyme patients. It’s effective against Lyme. We knew it had effectivity against viruses and other pathogens like Borrelia and Babesia.”

Nurses administer care to a patient at a medical center in Seattle, on May 6, 2020. (Karen Ducey/Getty Images)

Sirotek told The Epoch Times that, especially as the Delta strain increased hospitalizations and deaths in the United States, she and several nurses questioned why some countries seemingly remained unaffected. The answer, she believes, was widespread ivermectin use.

At first, prescribing ivermectin and obtaining it from a regular pharmacy wasn’t an issue, Wright said. More importantly, it worked.

“We started using it very early on, and I could prescribe it to the pharmacy. I would prescribe it according to the FLCCC recommendations because they were the ones doing the research. I was just validating that, you know, this has some real stuff behind it.”

When the pandemic began, ivermectin as an effective treatment was primarily a theory. But as health care workers reported that it worked, more and more studies were conducted to back up those early successes.

There have been 189 ivermectin COVID-19 studies, according to the aggregate site C19ivm.org. Of those studies, 139 have been peer-reviewed, and 93 compare treatment and control groups.

In the 93 studies, which had more than 133,838 patients in 27 countries, there were “statistically significant improvements are seen for mortality, ventilation, ICU admission, hospitalization, recovery, cases, and viral clearance,” a real-time meta-analysis states.

Dr. Peter Raisanen, a naturopathic medical doctor in Arizona, said that once he started his patients on ivermectin, they typically started feeling better within a few days.

“It seemed like it was within three to four days, like they [started feeling] better,” Raisanen told The Epoch Times.

Raisanen said he treated about 200 patients with ivermectin, and none died. Almost all stayed out of the hospital. That’s an experience several doctors attested to witnessing.

He said that when a patient was treated early on in their illness, there was a clear improvement—often within hours.

“It’s within two hours of that first dose that people start feeling noticeably better. And within two days, most symptoms are gone. Again, this is with starting early treatment, say days one to three, one to four, of infection or symptoms,” Dark said.