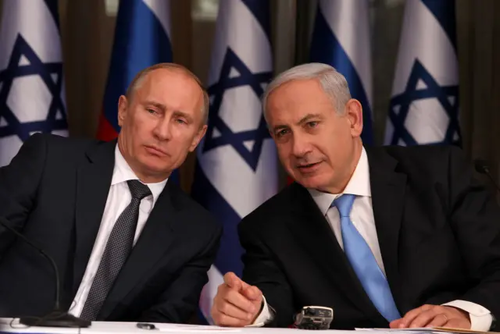 Israel’s new government under Prime Minister Benjamin Netanyahu is signaling a huge policy shift regarding both the Ukraine war and Israel’s relations with Russia, even suggesting a more openly ‘pro-Moscow’ stance.

Israel’s Foreign Minister Eli Cohen in a Monday speech previewing future policy said in the context of the Ukraine conflict, “On the issue of Russia and Ukraine we will do on thing for sure – speak less in public.” Interestingly it comes after months of rising tensions with Kiev, based on Israel’s repeat refusal to provide the Ukrainians with its Iron Dome anti-air defense systems and other weaponry. However, the prior government was much more vocally supportive of Ukraine, in line with key Western allies like the United States and Britain.

Israel has limited itself to supplying humanitarian and other non-lethal aid, causing President Zelensky to recently lash out. In October Zelensky went so far as to chastise Israeli officials for turning “a blind eye to Russian terror”.

Zelensky also said at the time, which came in the context of a virtual address before Israeli journalists: “Is it [Israel] with the democratic world, which is fighting side by side against the existential threat to its existence? Or with those who turn a blind eye to Russian terror, even when the cost of continued terror is the complete destruction of global security?”

Fast-forward to a new hard-right Israeli government having days ago been sworn-in, and it appears that Zelensky’s fiery denunciation and pressure campaign has backfired.

But it seems Zelensky saw it coming, given the following comments at the end of November:

“Of course, if [Netanyahu] wants to maintain his personal relations with Putin, he can continue doing what he’s doing,” Zelensky said at the summit, held in New York City.

“But if he wants to maintain the historical relations between Israel and the Ukrainian people, you have to do everything you can to save as many people as possible.”

1 BREAKING: New Israeli foreign minister Eli Cohen signaled a policy shift on Ukraine in his 1st speech hinting the new government will take a more pro-Russian line. He said he will speak on Tuesday with Russian FM Lavrov – 1st such call since the Russian invasion of Ukraine

The incoming Israeli FM in the Monday remarks vowed a new “responsible” policy on the war in Ukraine, describing that the foreign ministry “will prepare a detailed presentation to the security cabinet on this issue.” He did say that Israeli humanitarian aid to the war-ravaged country will continue, but clearly this is a sign the door has been shut regarding the prospect of lethal aid in the near future.

According to Axios Middle East correspondent Barak Ravid, this marks a dramatic shift in Russia-Ukraine policy compared to the last caretaker government which was in place during the initial invasion and throughout the first 10 months of war. Ravid writes:

Why it matters: Cohen’s predecessor Yair Lapid led a tough line Russia, condemned it publicly & even said the Russian military committed war crimes. Since the invasion Lapid didn’t speak to Lavrov & after he assumed office as caretaker prime minister he didn’t speak to Putin.

Russia’s Putin welcomes Netanyahu back to power in Israel https://t.co/7neWZuimVP

Ravid further noted Cohen is expected to hold a phone call with his Russian counterpart:

New Israeli foreign minister Eli Cohen signaled a policy shift on Ukraine in his 1st speech hinting the new government will take a more pro-Russian line. He said he will speak on Tuesday with Russian FM Lavrov – 1st such call since the Russian invasion of Ukraine.

Meanwhile, an awkward standoff could be developing at the UN, given Ukrainian and Israeli officials are seeking to ramp up pressure on each other concerning votes and policy positions before the world body.

As for Israel wanting to keep up tighter relations with Moscow, one prime factor is that it needs Russia to continue giving a quiet green light to Israeli Air Force strikes inside Syria. Israel says it is acting against Iranian assets inside the country, as well as Hezbollah. Russia has a significant military presence in Syria at the invitation of President Assad, but has not intervened against Israeli aggression in semi-frequently bombing places like Damascus, despite its limited verbal denunciations.