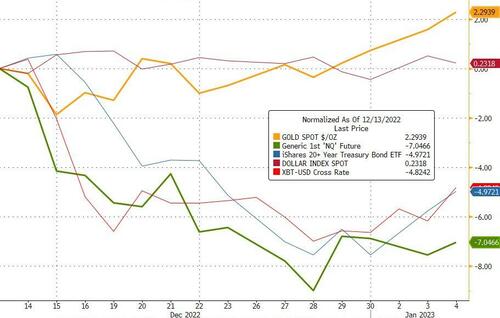 Most notably, financial conditions have notably tightened post-FOMC as Powell had wanted, after dovishly decoupling from The Fed’s policy actions…

And we suspect Powell will not want the Minutes to stall that trend.

So what did The Minutes say?

“Participants noted that, because monetary policy worked importantly through financial markets, an unwarranted easing in financial conditions, especially if driven by a misperception by the public of the Committee’s reaction function, would complicate the Committee’s effort to restore price stability.”

Additionally, It’s also interesting how there are “many” Fed officials saying that there was a need to balance two-sided risks.

This suggests there is a growing split at The Fed.

Slowing rate hikes is not pivoting:

“Participants reaffirmed their strong commitment to returning inflation to the Committee’s 2 percent objective. A number of participants emphasized that it would be important to clearly communicate that a slowing in the pace of rate increases was not an indication of any weakening of the Committee’s resolve to achieve its price-stability goal or a judgment that inflation was already on a persistent downward path.”

On disconnect between market and FOMC:

“Several participants commented that the medians of participants’ assessments for the appropriate path of the federal funds rate in the Summary of Economic Projections, which tracked notably above market-based measures of policy rate expectations, underscored the Committee’s strong commitment to returning inflation to its 2 percent goal”

“Few” signs of a wage-price spiral

“Participants noted that, in the latest inflation data, the pace of increase for prices of core services excluding shelter—which represents the largest component of core PCE price inflation—was high. They also remarked that this component of inflation has tended to be closely linked to nominal wage growth and therefore would likely remain persistently elevated if the labor market remained very tight. Consequently, while there were few signs of adverse wage-price dynamics at present, they assessed that bringing down this component of inflation to mandate-consistent levels would require some softening in the growth of labor demand to bring the labor market back into better balance.”

On preserving “flexilbility and optionality”

“In light of the heightened uncertainty regarding the outlooks for both inflation and real economic activity, most participants emphasized the need to retain flexibility and optionality when moving policy to a more restrictive stance. Participants generally noted that the Committee’s future decisions regarding policy would continue to be informed by the incoming data and their implications for the outlook for economic activity and inflation, and that the Committee would continue to make decisions meeting by meeting.”

But, risks are skewed to the upside for inflation but downside for growth

“With inflation still elevated, the staff continued to view the risks to the inflation projection as skewed to the upside. “

“Moreover, the sluggish growth in real private domestic spending expected over the next year, a subdued global economic outlook, and persistently tight financial conditions were seen as tilting the risks to the downside around the baseline projection for real economic activity, and the staff still viewed the possibility of a recession sometime over the next year as a plausible alternative to the baseline”

“Some participants also noted that, by some measures, firms’ markups were still elevated and that a continued subdued expansion in aggregate demand would likely be needed to reduce remaining upward pressure on inflation.”

Additionally, The Fed is starting to discuss the coming jump in minority unemployement

“A number of participants commented that as the labor market moved into better balance, the unemployment rate for some demographic groups — particularly African Americans and Hispanics — would likely increase by more than the national average.”

“The other risk was that the lagged cumulative effect of policy tightening could end up being more restrictive than is necessary to bring down inflation to 2 percent and lead to an unnecessary reduction in economic activity, potentially placing the largest burdens on the most vulnerable groups of the population.”

Overall, these Minutes were the most hawkish since May 2022…

“Minutes reveal that Fed staff are cautious about interpreting recent data as showing a definitive decline in inflation. For example, they note that the falling inflation compensation implied by TIPS is due to a decline in risk premiums rather than inflation expectations.

“Staff point to job-openings data moving down in October. However, JOLTS data for November (released today) showed an upward revision to October’s job openings, and the vacancy-to-unemployed ratio actually edged back up in November.

“Staff sound more alarmed about nominal wage growth than in previous FOMC minutes, hinting that the underlying pace might be running at 5%.”

Read the full FOMC Minutes below: