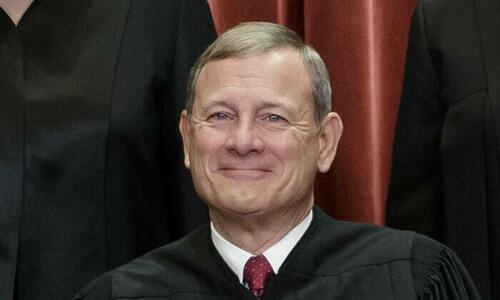 After a difficult 2022 at the Supreme Court, Chief Justice John Roberts said in an annual report that the personal security of judges needs to be a priority.

“The law requires every judge to swear an oath to perform his or her work without fear or favor, but we must support judges by ensuring their safety,” Roberts wrote (pdf) in the “2022 Year-End Report on the Federal Judiciary,” which was made public late Dec. 31.

“A judicial system cannot and should not live in fear,” he added.

In the report, Roberts paid tribute to federal Judge Ronald N. Davies, who in 1957 ruled in favor of black students in Little Rock, Arkansas, who had been barred from attending a local high school despite the Supreme Court’s landmark ruling in 1954 striking down school desegregation on constitutional grounds.

Arkansas Gov. Orval Faubus, a Democrat, ordered the state’s National Guard to block the students but “when it came time to rule in the school desegregation litigation, Davies did not flinch,” Roberts wrote.

Angry crowds resisted the desegregation effort and Republican President Dwight D. Eisenhower directed the 101st Airborne to make sure the black students could attend the school.

In his role as Chief Justice of the United States, Roberts, appointed in 2005 by President George W. Bush, both presides over the Supreme Court and oversees the federal judiciary.

The report does not reference the unprecedented leak in May 2022 of Justice Samuel Alito’s draft majority opinion in Dobbs v. Jackson Women’s Health Organization, which overturned Roe v. Wade, the 1973 precedent that legalized abortion nationwide.

The Supreme Court is said to be investigating the leak, but the identity of the leaker or leakers is still unknown. Various justices have said publicly and repeatedly in recent months that the public would be updated on the progress of the investigation but no updates have been issued.

The report also does not reference the raucous protests at the homes of the conservative justices in Maryland and Virginia, nor the attacks on justices such as Brett Kavanaugh who was the target of a foiled assassination attempt and of flash-mob harassment in public outings by left-wing activists.

Roberts defended the right of Americans to disagree with court rulings.

“Judicial opinions speak for themselves, and there is no obligation in our free country to agree with them. Indeed, we judges frequently dissent—sometimes  strongly—from our colleagues’ opinions, and we explain why in public writings about the cases before us.”

Roberts said recent security legislation was a step in the right direction.

Roberts acknowledged that last month Congress passed the Daniel Anderl Judicial Security and Privacy Act to help protect judges and their families. The measure was named after the son of federal Judge Esther Salas of New Jersey, who was killed by an assailant when he answered the door to his mother’s home.

Roberts did not mention that on June 16, 2022, President Joe Biden signed the Supreme Court Police Parity Act into law. The measure gives Supreme Court officials greater authority to protect the court, members of the justices’ immediate families, and other court employees.

The report also states that caseloads for the federal judiciary, including the Supreme Court, fell over the past year.

In the 12-month period ending Sept. 30, 2022, the number of cases docketed by the Supreme Court dropped by 8 percent compared to the previous 12-month period. Similar declines were seen in federal courts of appeals, district courts, and bankruptcy courts.

The Epoch Times reached out to the U.S. Department of Justice for comment but did not receive an immediate reply.