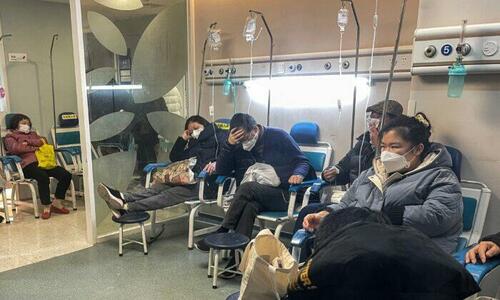 Authored by Nathan Su via The Epoch Times,

“Zero non-COVID” is the name that people in China are calling the regime’s new pandemic management policy. The Chinese Communist Party (CCP) has aggressively pushed the whole country towards an all-COVID-positive state.

China’s annual rubber-stamp legislature is usually in session during the month of March. It is widely expected that the coming session will focus on saving China’s economy because it is on the edge of collapse after the three-year long zero-COVID policy.

Party leader Xi Jinping is clearly willing to pay any price to reopen the country.

Government employees of Chongqing City in Sichuan Province and Zhejiang Province received notices telling them return to their offices to work even if they have tested positive for COVID-19, as long as their symptoms are mild.

The total population of Chongqing City is more than 31 million, and Zhejiang province more than 57 million.

Rumors on the Chinese internet talked about local governments of Chongqing City and Zhejiang Province being criticized by Beijing because these regions were too slow to reach a high percentage of COVID positive patients.

A local official in Shanghai told The Epoch Times on Dec. 27 that his office had received instructions to do whatever it could to push the city into the COVID peak status.

All state-owned media are mute about the current situation in the country, and reports from different government agencies are conflicting.

The Zhejiang Provincial government recorded one million new COVID cases on Dec. 25, while the Chinese national CDC only reported 2,983 new cases in the whole nation for the same day.

The regime announced that on Jan. 8, 2023, China will totally reopen travel in and out of the country, which has triggered concern in countries around the globe. Italian officials reported on Dec. 28 that 50 percent of passengers on two flights from China tested positive for COVID.

Chinese travelers leave the arrival hall of Rome Fiumicino International Airport, near Rome, after being tested for COVID-19 on Dec. 29, 2022. (Filippo Monteforte/AFP via Getty Images)

China, a country with a population of more than 1.4 billion, moved from the zero-COVID policy to a zero non-COVID policy within a month. The sudden change has left health experts worldwide feeling uncertain, because the explosion in COVID cases in China may lead to the whole world being exposed to new variants.

The Western media have widely attributed the sudden policy change to the late November White Paper protests against the zero-COVID policy in China. However, according to World Health Organization (WHO) emergencies chief Michael Ryan, the COVID spike in China was not due to the lifting of the government mandated restrictions.

Before the policy change, “the disease was spreading intensively because I believe the control measures in themselves were not stopping the disease. And I believe China decided strategically that was not the best option anymore,” Ryan said.

The regime’s change from Zero-COVID to a Zero non-COVID policy did not come without signs.

On Sept. 30, Xi Jinping and all top CCP leaders went to Tiananmen Square for a memorial service on Marty’s Day. Xi and others brought flowers to the People’s Heroes Monument, a stone that was erected to remember those who died for the Party in the past. The pictures of the service show hundreds of people at the event who are not wearing masks.

For a country that has been enforcing the mask wearing principle as a part of its zero-COVID policy, the event was the first clear sign of the regime’s impending policy change.

On Oct. 28, Xi said during his short stay in Henan Province: China’s socialist system was established with the sacrifice of human lives. He said that this sacrifice is also needed in the modern era. Xi visited the province after the CCP’s 20th Congress earlier in the month, in which he was re-elected to a third term as the head of the CCP.

On Nov. 24, a fire started in a high-rise apartment building in Urumqi City that caused many deaths and injuries because the fire escape was locked. The incident later caused widespread protests in many cities. On Dec. 7, Beijing officially lifted its three-year long zero-COVID policy.

It is obvious that the CCP started the policy change quietly as early as in late September. The widespread protests after the Urumqi fire on Nov. 24 became the perfect excuse for the regime to openly adopt a new policy.

The reason for the regime’s policy change is clear: to save the regime’s ruling power at the cost of Chinese people’s lives.