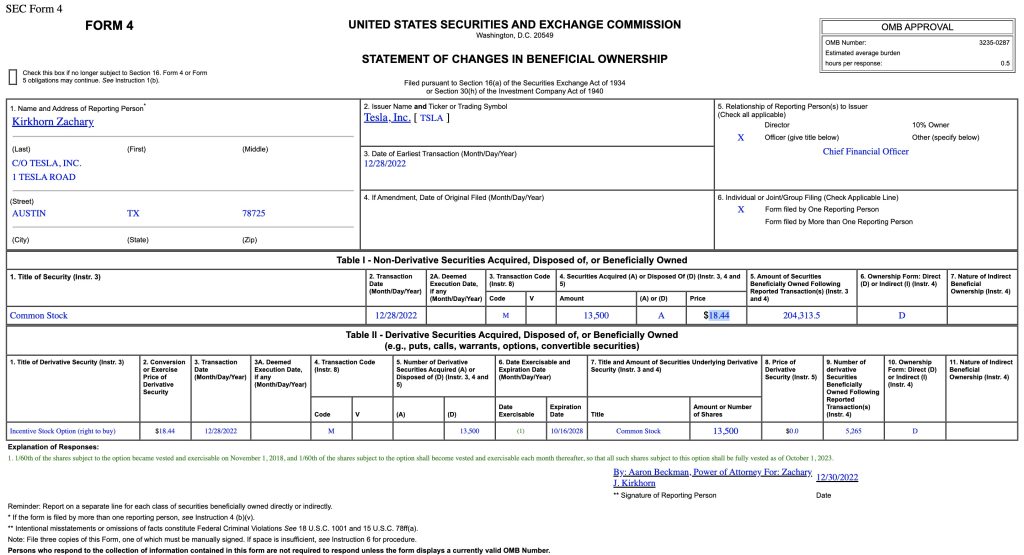 While Tesla CEO Elon Musk courted headlines this year due to his sales of TSLA stock, some of the company’s top executives appear to be loading up on shares of the electric vehicle maker. Among these is Tesla Chief Financial Officer (CFO) Zachary Kirkhorn, who exercised options to buy TSLA shares recently.

As per a recent Form-4 filing with the US Securities and Exchange Commission (SEC), Kirkhorn had exercised options expiring in October 16, 2028 to purchase 13,500 TSLA shares. With his most recent purchase, Kirkhorn now owns a total of 204,313.5 shares of the electric vehicle maker. The CFO was also able to purchase TSLA at a price of $18.44 per share.

Credit: US Securities and Exchange Commission

While Kirkhorn’s shares today are only worth about $25 million as per Friday’s closing price, they would be worth nearly $78 million during TSLA’s all-time highs in November 2021. If any, Kirkrhon’s purchase of TSLA stock seems to be a vote of confidence for the company. There is likely no one in Tesla, after all, who is more knowledgeable about the EV maker’s financial data than its CFO.

Tesla closed out 2022 with a 65% decline. Despite this, and despite the persistent “demand issue” narrative from the critics, Tesla’s fundamentals seem to be stronger than ever. The company also has a number of key projects that could become tailwinds in the coming year, such as the first deliveries of the Cybertruck and the rollout of the Model 3’s “Project Highland” updates.

Elon Musk highlighted this point in a recent message to Tesla employees. In a letter earlier this week, Musk advised Tesla’s team not to mind the volatility of TSLA’s price.” Btw, don’t be too bothered by stock market craziness. As we demonstrate continued excellent performance, the market will recognize that. Long-term, I believe very much that Tesla will be the most valuable company on Earth!” Musk wrote.