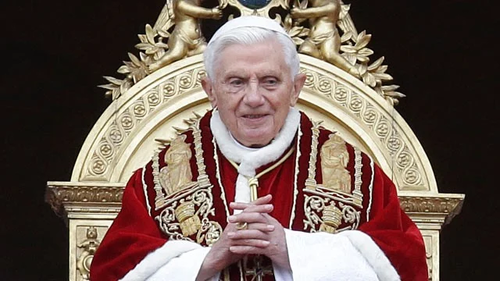 Pope Emeritus Benedict XVI has died Saturday, the Vatican has confirmed in a statement, at the age of 95 following weeks of deteriorating health. The past week saw Vatican officials issue calls for prayer for the former Pope as he had become very sick. “With sorrow I inform you that the Pope Emeritus, Benedict XVI, passed away today at 9:34 in the Mater Ecclesiae Monastery in the Vatican. Further information will be provided as soon as possible,” the Vatican announced of his Dec.31 passing.

He had been elected head of the worldwide Roman Catholic Church, which claims over a billion adherents, in 2005 and served as pontiff until 2013, when he stunned the world by voluntarily resigning. It had been the first time in nearly 600 years that a pope had stepped down, given throughout history they typically occupy the position until death.

“After having repeatedly examined my conscience before God, I have come to the certainty that my strengths, due to an advanced age, are no longer suited to an adequate exercise of the Petrine ministry,” he explained in a resignation letter at the time.

In an unusual arrangement he lived in the Vatican near the current Pope Francis, in a section of the tiny city-state called the Vatican Gardens. His sudden resignation had set off speculation over whether it was driven by various scandals dominating the attention of Catholic leadership, given at the time Benedict and Vatican officials had been grappling with the magnitude of the clergy sexual abuse crisis and how to respond.

Benedict himself had come under fire for his handling of the crisis even as recently as this year, after a damning report published January 2022 reviewed his tenure as archbishop of Munich in the late 1970’s to early 80’s. The internal watchdog investigation said he knew about priests abusing children in his diocese but failed to act, similar to other bishops and cardinals around the world.

Also driving speculation was the fact that in 2013 irregularities and scandal over the secretive operations of the Vatican Bank came under more intense scrutiny, leading to several arrests.

Benedict vowed to clean up the mess of the Vatican’s finances and bring greater transparency, which included in 2014 him firing the entire Vatican Bank board, but some observers speculated the task proved too immense – or else he crossed paths with other powerful individuals who could have made the public side of the financial scandal worse.

Another common theory was that liberals in the Vatican and among the powerful College of Cardinals pressured him out over his traditionalist stances on everything from how the mass is celebrated (he gave greater freedoms for bishops and priests to resurrect the Latin mass, or “Old Roman Rite” liturgy), to his unbending defense of Catholic teaching regarding homosexuality, abortion, and other right to life issues such as euthanasia.

“With sorrow I inform you that the Pope Emeritus, Benedict XVI, passed away today at 9:34 in the Mater Ecclesiae Monastery in the Vatican.

Further information will be provided as soon as possible.” pic.twitter.com/O5dxoPaVkT

As CNN and other mainstream media networks and pundits have long recognized, Benedict was seen as a polarizing figure when compared to the popes either immediately before or after him:

The German-born Benedict saw himself, and the church, as a bulwark against secular trends in Western society, particularly what he called the “dictatorship of relativism.” He often insisted that Catholics maintain a fortress mentality, saying perhaps a smaller, “purer” church would best maintain Catholicism’s traditions and teachings.

Conservative and more traditionalist Catholics, who feared their church might eventually go the way of the Church of England – known for its progressive sexual ethics and looser attitudes on a number of moral issues – had been angered and stunned when Benedict had stepped down.

It paved the way for the more Liberal-leaning Francis to become Pope, putting the conservatives once again on the defensive in their own church. Among Francis’ more recent controversial acts over the past two years was his again restricting the Latin Mass, as well as making ambiguous statements appearing to indicate he could be in favor of some kind of church-sanctioned gay civil unions arrangement.