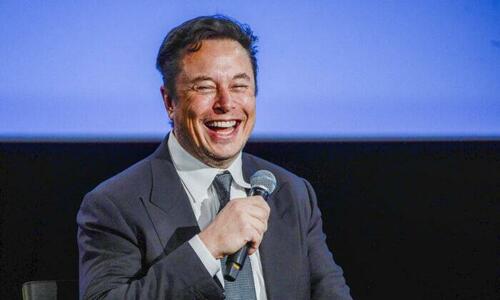 Authored by Frank Fang via The Epoch Times (emphasis ours),

Elon Musk has criticized mainstream media outlets over their coverage of the so-called “Twitter Files.”

“The Hunter Biden laptop story shows the extent to which the corporate media has become the propaganda arm of the state,” Woodhouse wrote in his Substack, pointing to the recent release of the seventh installment of Twitter’s internal documents.

Independent author Michael Shellenberger published the seventh installment on Dec. 19, revealing how there was an “organized effort” by federal law enforcement agents to discredit the 2020 Hunter Biden laptop report, by targeting social media and news companies.

Other installments of Twitter’s internal communications have shown how the media giant placed certain individuals on “secret blacklists,” debates over how to handle former President Donald Trump’s account before it was suspended in January 2021, and how the FBI allegedly flagged accounts and tweets for Twitter to take action against.

The FBI has dismissed the “Twitter Files,” alleging that “conspiracy theorists” are attempting to discredit the bureau.

To which Musk replied: “Exactly. Why would anyone trust corpo journalism?”

In the same thread, Musk also said that he was “open to the idea” of buying the Substack platform, while responding to a tweet from Wall Street Silver.

Substack allows independent writers and podcasters to publish directly to their audiences and get paid through subscriptions, the platform’s website says.

Tuesday was not the first time that Musk has expressed an interest in buying Substack.

On Dec. 8, conservative commentator Dave Rubin started a thread by alleging that Google and YouTube’s “manipulation for political purposes is FAR worse than Twitter’s.”

The Twitter user wrote: “You would have the information layer with Twitter and the narrative layer. Corporate media would then have [to] specialize on reporting government leaks, from ‘people familiar with the matter.’”

“I’m open to the idea,” Musk wrote in response to the recommendation.

On Dec. 28, Musk responded to a Twitter clip posted by CNBC’s “Squawk Box,” during which Axios reporter Hope King said the new Twitter chief’s reputation was “in danger.”

“All of the macro conditions are against his favor. Market-share for $TSLA is down year-over-year. His reputation with Twitter is impacting his reputation when it comes to all of his companies,” she said.

In response, Musk wrote: “The legacy media should worry about its reputation. We have only just begun.”

Musk has promised to promote free speech after acquiring Twitter and his decision to release the company’s internal documents is tied to his promise.

“The Twitter Files on free speech suppression soon to be published on Twitter itself. The public deserves to know what really happened,” Musk wrote on Twitter on Dec. 28, just days before the first batch of the “Twitter Files” was released by independent journalist Matt Taibbi.

Emails from the laptop’s hard drive and Treasury records revealed how then-Vice President Joe Biden, his brother James, and Hunter Biden were involved in various foreign business ventures, in countries such as Ukraine, Russia, and China. At the time, many media outlets discredited the revelations as “Russian disinformation” and the news was blocked by social media platforms.

“These explosive revelations show the enormous power that a handful of liberal tech executives have over our public discourse,” Wicker wrote in his weekly report published on Dec. 26.

“We should be grateful that new leadership is lifting the hood on Twitter, but Congress needs to follow up with wider investigations into Big Tech companies, including Facebook and Google,” he said.