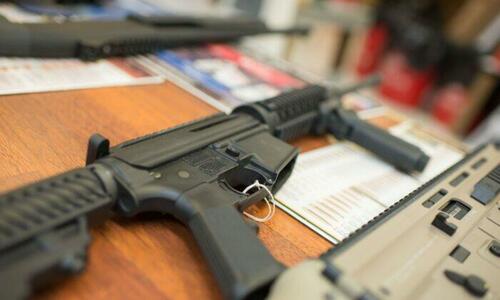 Authored by Scottie Barnes via The Epoch Times (emphasis ours),

An Oregon gun-control measure that many predict will wind up in the U.S. Supreme Court remains in limbo.

In a Dec 23 hearing, Circuit Court Judge Robert Raschio said he would rule by Jan. 3 whether to lift a temporary restraining order (TRO) on the Oregon Ballot Measure 114 requirement that a background check be completed before a firearm can be sold or transferred.

Earlier this month, Raschio issued a TRO on the measure’s permit-to-purchase provision and its ban on magazines that carry 10 or more rounds. Those TROs are still in place.

Passed in November with just 50.7 percent of the vote, Ballot Measure 114 was initially scheduled to take effect Dec. 8 but, starting on Dec. 6, faced a flurry of lawsuits.

A driver pulled a handgun after Antifa members smashed his truck lights in Salem, Ore., on March 28, 2021. Second Amendment activists say that if fully implemented, Oregon Ballot Measure 114 would adversely impact a citizen’s right of self defense. (Nathan Howard/Getty Images)

In a Harney County suit filed on Dec. 6 by Gun Owners of America (GOA), the Gun Owners Federation, Cliff Asmussen, and Joseph Arnold, Raschio issued a TRO just three hours after Federal Court Judge Karin J. Immergut had denied such relief to plaintiffs in one of four related cases.

In his ruling, Raschio said the law violated the Oregon state constitution’s right to bear arms and that Oregonians would be “unable to lawfully purchase a firearm or bear a magazine capable of holding more than 10 rounds of ammunition in the State of Oregon.”

The Oregon Department of Justice immediately filed a petition asking the Oregon Supreme Court to vacate the lower court’s decision.

“We strongly disagree with the decision of the Harney County Circuit Court,” Oregon Attorney General Ellen Rosenblum wrote to the court. “Our mandamus petition to the Oregon Supreme Court gives our highest state court the opportunity to weigh in now and reverse the Harney County judge’s ruling.”

On Dec. 13, Raschio heard arguments on the permit-to-purchase provision, which the state acknowledged was not ready to go. The state had declared that it needed until approximately Feb. 8 to implement that system.

Lifting the order before the permitting system is ready would cause “irreparable harm to the constitutional right to bear arms,” he said. The judge continued the TRO for this provision. When the state notifies him in writing that it is prepared to roll out the new permitting program, he will schedule a hearing.

The court then considered the ban on magazines that hold 10 rounds or more. The state argued that such firearms were not in “common use” when the Second Amendment was ratified. So, they are not protected.

The state’s expert, Brian DeLay, associate professor of history at the University of California at Berkeley, testified that high-capacity firearms were an “experimental technology” and not commercially available when the Oregon Constitution was ratified.

Experts for the plaintiffs testified that high-capacity firearms have existed since the 16th century.

Isaac Botkin, the technical and education director at manufacturing company T-Rex Arms for more than a decade, described a long history of firearms capable of holding more than 10 rounds, the most famous being one carried by the Lewis and Clark Expedition. It was in 1804-06 that Capt. Meriwether Lewis and Lt. William Clark led the expedition to explore the Louisiana Purchase and the Pacific Northwest.

“Meriwether Lewis carried a firearm that had the capability of 20 or 22 rounds that was quite effective,” he said.

The state’s attorney argued that Botkin shouldn’t be allowed to make any “historical conclusions” on the history of guns, claiming that he is not an expert. The judge disagreed and allowed Botkin to continue.

Plaintiff’s Attorney Tony Aiello Jr. argued that magazines that hold more than 10 rounds are standard for guns manufactured today. He said those guns are “essentially the same firearm, just modified by design and function,” as some of the nation’s earliest guns.

Raschio asked whether magazine restrictions would “reasonably promote public safety by restraining a constitutional right to bear arms” as claimed in the ballot measure. Aiello argued that it would not, claiming that the ban would deny law-abiding Oregonians the ability to defend themselves while criminals continue to ignore the law.

Convinced that the ban would violate Oregonians’ rights under the state constitution, Raschio also extended the TRO on the magazine restriction.

“Based upon the preliminary evidence, the result of BM 114 would be a near absolute prohibition on handguns and many other firearms with their magazines,” Raschio wrote.

The Dec. 23 hearing focused primarily on the measure’s requirement that a background check is completed before a firearm can be sold or transferred.

Oregon special Attorney General Harry B. Wilson argued that the completed background-check requirement would save lives, is constitutional, and wasn’t explicitly challenged by the plaintiffs.

A licensed firearms dealer can legally deliver a purchased gun after three business days if the required federal background check is not complete—what gun control advocates call the “Charleston Loophole.” Measure 114 would end that by giving the state more time to complete background checks.

Measure Offers No Guarantee of Expediency

“Although a significant percentage of background checks are completed automatically within minutes, many require additional time,” Wilson wrote to the court. “As a result, in some instances, individuals with felony criminal histories can obtain a firearm because the transferer can deliver the firearm after three days and before the background check is complete.”