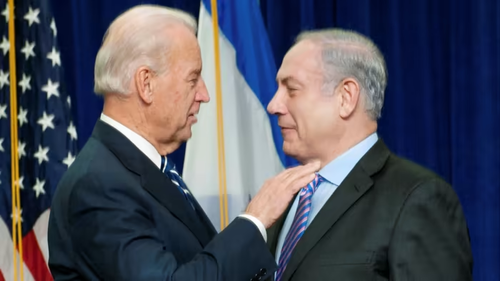 As we previewed earlier Benjamin Netanyahu has formed what’s being widely perceived as the most hardline and right-wing governing coalition in the country’s history, and on Thursday he was sworn in as the next prime minister along with this top officials.

President Biden promptly issued a formal congratulations, but also stressed that his administration will “oppose policies that endanger” the two-state solution or “contradict our mutual interests and values.”

The somewhat strained congratulatory statement among “friends” suggests that relations could get rocky from the start, given on Wednesday Netanyahu’s Likud party released the new governing coalition’s policy guidelines which vowed to place settlement expansion in the Palestinian West Bank as highest on the list of priorities.

The policy statement opens by vowing to “advance and develop settlement in all parts of the land of Israel – in the Galilee, Negev, Golan Heights, and Judea and Samaria.”

Netanyahu’s return to power, after already being the longest-ever serving PM for the country, comes after he was ousted 18-months ago under a cloud of scandal. He served as prime minister from 2009 to 2021 – and his ultra-right coalition finally emerged victorious after multiple failed national election attempts.

Here’s how Axios, consistent even with a number of Israeli publications, describes the new government sworn in on Thursday:

Biden still stressed that the two leaders can “jointly address the many challenges and opportunities facing Israel and the Middle East region, including threats from Iran.”

Benjamin Netanyahu was sworn in as Israel’s prime minister in a comeback at the head of a right-wing cabinet that promises to expand Jewish settlements in the occupied West Bank and pursue other policies criticized at home and abroad https://t.co/bOF9f1Tkd1 pic.twitter.com/skHQvSfqTU

The Biden statement continued: “The United States is working to promote a region that’s increasingly integrated, prosperous, and secure, with benefits for all of its people.”

The White House has only within the past month acknowledged that the JCPOA Iran nuclear deal is dead. Israeli officials have long warned that any “bad deal” would result in them seriously contemplating a preemptive attack on Iranian nuclear facilities. Netanyahu’s own newly appointed national security chief actively supports military strikes on the Islamic Republic.

It’s worth recalling that after the Biden administration entered the White House at the start of 2021, then PM Netanyahu had to wait weeks for an initial phone call from Biden after Israel reached out. This was widely taken inside Israel as sign of a ‘cold shoulder’ from Biden.