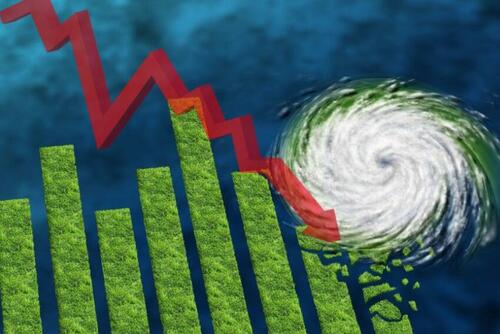 Authored by Rupert Darwall via RealClearEnergy.org,

The year 2022 brings an end to an era of illusions: a year that saw the end of the post–Cold War era and the return of geopolitics; the first energy crisis of the enforced energy transition to net zero; and the year that brought environmental, social, and governance (ESG) investing down to earth with a thump—for the year to date, BlackRock’s ESG Screened S&P 500 ETF lost 22.2% of its value, and the S&P 500 Energy Sector Index rose 54.0%. The three are linked. By restricting investment in production of oil and gas by Western producers, ESG increases the market power of non-Western producers, thereby enabling Putin’s weaponization of energy supplies. Net zero—the holy grail of ESG—has turned out to be Russia’s most potent ally.

It wasn’t only a bad year for ESG on the stock market. Earlier this month, Vanguard announced that it was quitting Glasgow Financial Alliance for Net Zero (NZAM), set up by former governor of the Bank of England Mark Carney a little over a year ago. “We have decided to withdraw from NZAM so that we can provide the clarity our investors desire about the role of index funds and about how we think about material risks, including climate-related risks,” the world’s second-largest asset manager said.

Two months ago, Alex Edmans, coauthor of the latest edition of the standard textbook on the principles of corporate finance and professor of finance at the London Business School, published a paper titled “The End of ESG”—without a question mark. Edmans criticizes what has become the primary justification for ESG: the claim that business can generate higher returns for investors by tackling climate change. Since governments are democratically elected by a country’s citizens, they are best placed to address externalities, whereas investors disproportionately represent the elites. “If ESG is pursued for its externalities, companies and investors should be very clear that it may be at the expense of value,” Edmans says.

October also saw the publication of Terrence Keeley’s Sustainable, where the former BlackRock senior executive penned what amounts to a requiem for ESG. Rather than “doing well by doing good,” the logic of Keeley’s case, as I reviewed for RealClear Books, is that investors in conventional ESG investment products are likely to end up not doing very well and leave investors feeling good, not doing good.

It has not all been going one way. In May, HSBC terminated Stuart Kirk, its global head of research at HSBC’s asset-management arm, for voicing some hard truths about ESG. Earlier this month, HSBC announced that it will stop financing new oil and gas fields, putting the West’s third-largest bank on Putin’s side in Russia’s energy war on the West.

What is now a negative factor disadvantaging the West in a world increasingly characterized by East–West geopolitical tensions originated after a period when the United Nations had been fostering a horizontal global division between a rich North and an exploited South. As University of Pennsylvania’s professor Elizabeth Pollman records in her June 2022 paper “The Origins and Consequences of the ESG Moniker,” through the 1970s and early 1980s, the UN promoted the New International Economic Order that called for the regulation of transnational corporations on the alleged grounds that they were widening the gap between developed and developing countries.

After Kofi Annan became secretary-general in 1997, the UN shifted from a strategy of confrontation to co-optation. Speaking at the World Economic Forum in Davos in January 1999, Annan launched a Global Compact between business and the UN. In 2004, the Global Compact’s financial-sector initiative published a report titled “Who Cares Wins”—a rip-off of the British special-forces SAS motto “Who Dares Wins”—arguing for “better consideration of environmental, social and governance factors” in investment appraisals, claiming that this would both improve outcomes for investors and help the UN achieve its sustainable development goals.

ESG means different things, depending on whom you’re talking to. Is it about risk disclosure? Or about factors driving long-term shareholder value? Or is it about society holding business to account? One thing is clear: ESG’s unsustainable dual mandate of boosting shareholder returns and at the same time making the world a better place— “doing well by doing good”—was present at the creation of ESG. It was a masterstroke by ESG’s designers to incorporate “G” for governance. No investor can be against improved governance, and it helped mainstream ESG, whereas previous iterations, such as Socially Responsible Investing (SRI), remained niche.

The 2008 financial crisis subsequently turbocharged the uptake of ESG. Having caused the financial crisis, Wall Street was going to redeem itself by saving the world from a planetary catastrophe. Without climate change, ESG would have vastly less salience. Although marketed as a climate risk analysis tool, ESG is no such thing. In reality, it’s about investors and debt providers driving the decarbonization of Western companies and sunsetting its oil and gas companies.

According to ESG doctrine, there are two types of climate financial risk—physical risk and transition risk—and it’s straightforward to demonstrate that both are spurious. Take the Bank of England. For its climate stress tests, the Bank of England uses a scenario derived from the Intergovernmental Panel on Climate Change’s (IPCC) extreme and physically implausible RCP8.5 climate scenario. Roger Pielke, Jr., professor of environmental studies at the University of Colorado–Boulder, and Justin Ritchie have documented how use of the RCP8.5 scenario represents “a stubborn commitment to error,” with its absurd projection of a sixfold growth in per-capita coal consumption to 2100, based on erroneous reports in the late 1980s of virtually unlimited coal deposits in Siberia and China. The Bank of England compounds implausibility with impossibility by taking the RCP8.5 pathway of 4 degrees by the turn of the century and telescoping it into a 3.3-degree Celsius rise by 2050. Central banks resorting to these types of games constitutes strong evidence that climate physical risk is a nonissue for financial stability.

When he was governor of the Bank of England, Mark Carney gave an agenda-setting speech alleging a tragedy of the horizon as the catastrophic impacts of climate change will be felt beyond the traditional horizons of most actors. Climate catastrophes are presumed to be triggered by tipping points, one of the earliest being the melting of the Greenland and West Antarctic ice sheets. In its sixth assessment report, the IPCC declared that with sustained warming, there was limited evidence that the Greenland and West Antarctic ice sheets would disappear “over multiple millennia.” That is some time horizon. Despite the best efforts of central bankers, geologic timescales of millennia and human timescales of decades are completely out of whack.

Similarly, climate transition risk and the stranded assets trope defy economic and financial logic. If you restrict the flow of capital into a sector producing stuff that people want and are willing to pay for, the price of the output of a capital-embargoed sector will rise, as will the value of its invested capital. This, in essence, is what has been happening in energy and capital markets over the past year and explains why ESG as an investment strategy does not work. In the absence of draconian government policies to suppress demand for oil and natural gas, ESG policies strangling the supply of capital to Western oil and gas producers have two effects: they push up the price of hydrocarbons; and they displace supply from Western producers to neutral or hostile ones, with major detriment to the economies and security interests of the West.

Although the disintegration of ESG as an investment strategy became unmistakable in 2022, its existence as a political doctrine will continue until it is challenged and defeated politically. This is already happening in Red states such as Florida, Texas, West Virginia, and Utah. It also requires concerted leadership at a national level to get central bankers and financial regulators to quit playing covert climate policy and to shame banks such as HSBC into switching their support from Russia in the energy wars by dropping their anti–oil and gas financing policies. Defeating ESG not a case of “who cares wins” but “who fights wins.”