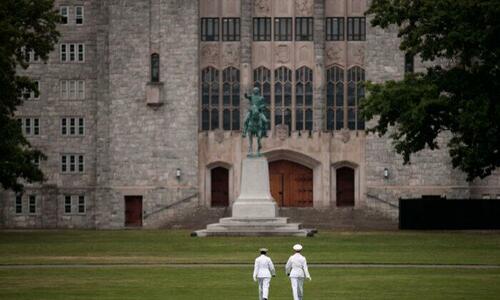 Authored by Samantha Flom via The Epoch Times (emphasis ours),

The U.S. Military Academy at West Point has commenced the removal and modification of 13 Confederate memorials and symbols on its campus at the direction of the Department of Defense.

Cadets walk across ‘The Plain’ before the Oath of Allegiance ceremony during Reception Day at the United States Military Academy at West Point, New York on June 27, 2016. (Drew Angerer/Getty Images)

The modifications—recommended by the congressionally mandated Naming Commission and subsequently approved by the Defense Department in October—were to begin over the school’s holiday break, which started on Dec. 18.

“Academy leaders and key stakeholders developed a comprehensive plan to ensure that historical artifacts will be professionally and respectfully handled during the execution phase,” the school said in a Dec. 19 statement. “Memorabilia removed during this process will be relocated to appropriate sites, including museums or other suitable venues.”

According to a letter (pdf) signed by Lt. Gen. Steve Gilland, superintendent of the U.S. Military Academy, items to be placed in storage includes a portrait of Confederate Gen. Robert E. Lee that hung in the academy’s library, Jefferson Hall; a stone bust of Lee from Reconciliation Plaza; and a bronze triptych from the main entrance of Bartlett Hall.

Meanwhile, the portrait and the stone bust of Union Gen. Ulysses Grant that have traditionally accompanied those of Lee will be moved to Grant Hall.

By Spring 2023, the school also intends to replace a quote from Lee displayed at Honor Plaza and begin refacing select stone markers at Reconciliation Plaza with modified language and images.

“We will conduct these actions with dignity and respect,” Gilland wrote in the letter. “In the case of those items that were class gifts (specifically, Honor Plaza and Reconciliation Plaza), we will continue to work closely with those classes throughout this process. Any costs associated with the Commission’s recommendations will be resourced within the Department of Defense.”

The U.S. Military Academy at West Point, New York, was founded in 1802 under President Thomas Jefferson.

The school churned out hundreds of graduates who fought for both the Union and Confederate armies, including Grant, in the class of 1843 and Lee in 1829.

Lee, who became commander of the Confederate Army toward the end of the Civil War, graduated second in his class at West Point and later served as the school’s superintendent from 1852 to 1855.

Established under the National Defense Authorization Act of Fiscal Year 2021, the Naming Commission was created to assign, modify, or remove names, symbols, displays, monuments, and paraphernalia within the Department of Defense that commemorate the Confederacy or those who voluntarily fought for the Confederate Army.

On Aug. 29, the eight-member commission submitted Part II of its final report to Congress (pdf), which addressed assets of the U.S. Military Academy and U.S. Naval Academy.

“Throughout the [West Point] grounds, plaques adorn almost every building and entrance, honoring the names and lives of West Point graduates who demonstrated exceptional devotion to the defense of the United States and the advancement of its ideals,” the commissioners wrote in their report. “Commemorating the Confederacy alongside those graduates honors men who fought against the United States of America, and whose cause sought to destroy the nation as we know it.”

In defending their recommendations relating to assets named after Lee, the commissioners noted that the general turned down the opportunity to serve as the top field commander for the Union Army, opting instead to join the Confederates.

“The consequences of his decisions were wide-ranging and destructive,” they added. “Lee’s armies were responsible for the deaths of more United States Soldiers than practically any other enemy in our nation’s history.”

As for the triptych, the commissioners called for the removal of the names of several Confederate soldiers. Additionally, acknowledging that the triptych’s depiction of a hooded Ku Klux Klansman did not fall under their purview, the commissioners also encouraged the secretary of defense to “address DoD assets that highlight the KKK in Defense Memorialization processes and create a standard disposition requirement for such assets.”

“The Commissioners do not make these recommendations with any intention of erasing history,” the commissioners noted. “The facts of the past remain and the Commissioners are confident the history of the Civil War will continue to be taught at all service academies with all the quality and complex detail our national past deserves. Rather, they make these recommendations to affirm West Point’s long tradition of educating future generations of America’s military leaders to represent the best of our national ideals.”

West Point’s announcement has been met with mixed reactions from those who have served in the nation’s armed forces, with some supporting the changes and others decrying them.