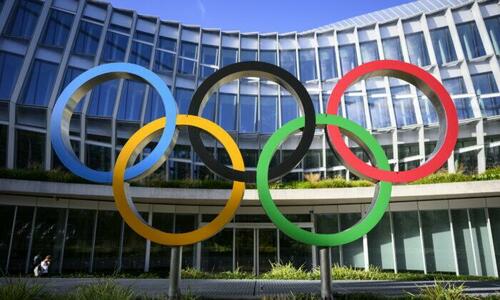 Transgender Guidelines May “Destroy” Women’s Sports, According To Female Olympians

Authored by Janice Hisle via The Epoch Times,

New Olympic guidelines emphasize the “inclusion” of transgender athletes, disqualifying them only after finding proof of “an unfair and disproportionate advantage,” which officials in each sport will define.

“Athletes should be allowed to compete in the category that best aligns with their self-determined gender identity,” the International Olympic Committee (IOC) declares in its Dec. 16 position paper.

Published in the British Journal of Sports Medicine, the statement represents the most recent step in a decades-long evolution of policies affecting female athletes.

The effects could be far-reaching because the IOC sets the tone for sports in community groups, high schools, and universities across the globe.

With the latest update, the IOC was trying to further explain the controversial transgender-related principles that the organization issued in November 2021. That document declared “no presumption of advantage” for male-to-female competitors, triggering a backlash.

Instead of clarifying the situation, the IOC appears to have sparked more confusion and resentment among some prominent female athletes.

Ex-Olympians fear that, by clearing the path for biological males to infiltrate women’s categories further, the IOC could cause women’s sports to deteriorate and eventually die. Faced with seemingly unbeatable biological male competitors, fewer girls and women are likely to participate, drying up the talent pool.

Mara Yamauchi, a two-time Olympic marathoner for the United Kingdom, reacted on Twitter to the IOC’s latest statement. She wrote:  “Its total disregard for women and girls made me so angry I was shaking.”

Yamauchi interpreted the IOC’s update this way: “We will destroy your sports, Ladies, but you are so totally worthless we won’t bother asking your views.”

However, the IOC said the guidelines included input from “all athletes, including trans athletes and athletes with sex variations, as well as human rights, legal, scientific and medical experts.”

Transgender activists applauded the IOC for its transgender-friendly stance; several Twitter users repeated the phrase:  “All kids deserve to have access to sport.”

No Presumption of Advantage

The guidelines stated: No athlete should be excluded from competition based on “an unverified, alleged or perceived unfair competitive advantage” arising from transgender status or physical appearance. “Sex variations,” apparently referring to genetic or physiological differences, also should not be factors.

Ex-Olympians protested, pointing to several well-recognized studies showing that, when compared to biological females, biological males tend to possess superior speed, strength, and stamina–just a few of the advantages that can enhance sports performance.

In 2017, researchers in Israel reported finding more than 3,500 genetic-encoded differences between males and females.

Some people say they don’t need a study to tell them what they see in daily life: observable performance contrasts between males and females.

That’s why much public debate has swirled around biological males who identify as transgender and compete in women’s sports.

The IOC’s new statement concedes that restrictions or exclusion may be appropriate for some transgender athletes. Noting that the impact of biological differences may differ from one sport to another, the IOC is allowing each sport’s governing body to put together its own rules.

The IOC says those officials should work with experts “in identifying the metrics and data that may be relevant to defining fair and proportionate advantage in competition.”

Since the modern Olympic era began in 1896, Olympic authorities have acknowledged sex-based differences among competitors.

In 1900, the first female athletes competed in the Olympic Games in Paris, France. Ironically, that’s the same location where the 2024 Summer Olympics will be held with the new transgender guidelines in effect, possibly to the detriment of many female sports, critics say.

Since at least the 1930s, people periodically complained about males possibly posing as females in Olympic competitions. As a result, mandatory sex-related tests for female Olympic competitors began in 1968.

The chromosome-based tests were denounced as degrading and sometimes inaccurate. Further, some critics viewed them as harmful to women’s sports.

“Testing evolved into a tool to identify—and eliminate—athletes the IOC deemed too strong, too fast, or too successful,” according to a summary of a 2016 book by author Lindsay Parks Pieper.

In this Aug. 9, 2008, file photo, China’s Chen Xiexia holds up 90kg in the snatch of the women’s 48kg weightlifting competition at the 2008 Olympics in Beijing, China. In 2017, she and other athletes from that Olympiad tested positive for banned substances and were stripped of their medals. (AP Photo/Andres Leighton)

The IOC voted in 1999 to discontinue mandatory sex tests for females. Some people reasoned that anti-doping regulations, which led to blood or urine screens for banned “performance-enhancing drugs,” would reduce the chances that an athlete could get away with posing as the opposite gender.

Starting with the 2004 Olympics, however, the IOC declared that transsexuals should be allowed to compete in female sports two years after completing sex-reassignment surgeries.

For the 2012 Olympics, female athletes of questionable biological sex were required to undergo testosterone tests. The athletes were disqualified if their levels of that masculinizing hormone exceeded a certain level—a requirement some people saw as unfair to athletes with high naturally occurring testosterone levels.

Transgender rights group members protest against an “Our Bodies, Our Sports” rally at the Freedom Plaza in Washington on June 23, 2022. (Terri Wu/The Epoch Times)

Now the situation is less clear-cut.

The new IOC document acknowledges that testosterone level “may be an important factor” in some sports. But testosterone tests alone shouldn’t drive decisions on whether to disqualify or limit an athlete, the IOC says.

In a “frequently asked questions” section of its website, the IOC points out that some biological males have become elite athletes despite testosterone levels that were so low, they were considered to be in the “normal” range for biological females.

Therefore, “athletic performance varies independently of an individual athlete’s testosterone levels,” the IOC said. “There is thus no scientific consensus on how testosterone levels can be used across sports to define unfair and disproportionate advantage.”

Cathy Devine, a British researcher specializing in sports policy, wrote on Twitter about the latest update: “The IOC has been forced into making some concessions: damage limitation.”

But Devine wrote, “IOC is still ignoring the human rights of female athletes.”

She added: “Female categories should be for females only. This upholds the international human rights framework which protects equality and non-discrimination against females on the basis of sex (means as compared with males).”

The Olympic Charter says that engaging in sports is a human right.

But transgender athletes must overcome barriers and often face “harassment, violence, and even sexual assault,” the IOC says, suggesting that may be why few transgender people participate in sports at all levels.

Against that backdrop, the IOC recommends that youth and community-level sports prioritize “inclusion.” Restrictions or exclusions of transgender athletes should be reserved for elite-level competitions, the IOC said.

Inga Thompson, a cyclist who represented the United States in three Olympiads, said the IOC’s statement is written in hard-to-decipher jargon, but this is her best interpretation of it: “They are acknowledging that women need a sex-separated category, and at the same time, they’re very much advocating for the inclusion of a transgender athlete into the women’s category.”

Thompson made that statement during a Dec. 19 Fox News interview.

Riley Gaines Barker, a former University of Kentucky swimmer who tied for fifth place against transgender swimmer Lia Thomas at the NCAA Championships in March 2022, speaks at the “Our Bodies, Our Sports” rally at Freedom Plaza in Washington on June 23, 2022. (Terri Wu/The Epoch Times)

It is particularly troubling that the IOC’s position paper calls for integrating transgender athletes in community-level sports and shying away from restrictions at the non-elite level, Thompson said.

She said multiple studies show that “young women, if not given a sex-separated sport, get discouraged” when they face off against competitors who possess advantages because they are biologically male.

The girls and women “end up walking away from the sport,” she said.

There’s also a safety concern. In some instances, female athletes have been overpowered and badly injured by males who identify as transgender females, so it’s no wonder that biological females will be intimidated and drop out, Thompson said.

That’s why she considers the IOC’s policy to be “suppressing all of the development of our next generation.” As a result, the future of women’s sports is imperiled, Thompson said.

Many sports organizations follow the IOC’s lead, Thompson said. But she urges parents: “You can advocate at your school level, at the state level, to try to keep fairness for these young girls.”

In a separate interview with NewsNation network, Thompson called the new guidelines “beyond unfair.”

“They have sold out women in favor of having more opportunities for more males,” she said.

Selina Soule (L) and Alanna Smith, student-athletes in Connecticut, were plaintiffs in a 2020 lawsuit alleging they faced unfair competition from biological males who identified as transgender females. (Alliance Defending Freedom)

Thompson pointed out that the Olympics have separate categories for athletes with physical disabilities or mental impairments, along with those based on age, sex, and weight. Yet the IOC advocates putting transgender athletes into the women’s category “at the exclusion of women,” Thompson said.

“If you really want to have true inclusion, you need to start another category” for transgender athletes, she said.

Because each sport must interpret and implement the guidelines, the effects of the IOC’s position on the next Summer Olympics, set for 2024 in Paris, France, remain unclear.