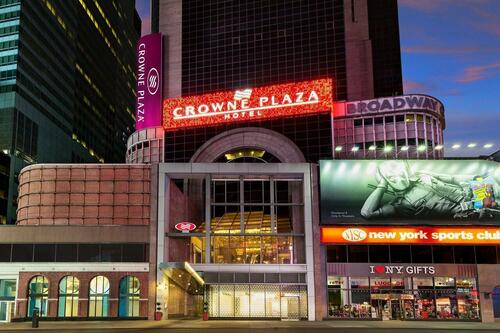 Is this the first major commercial real estate domino to fall in the aftermath of covid’s “work from home” revolution?

The corporate owners that operate the recently reopened Crowne Plaza Hotel in Times Square filed for Chapter 11 bankruptcy protection Wednesday in an effort to resuscitate the ailing and lawsuit-plagued business, Bloomberg and TheRealDeal reported. •   The owners – ultimately owned by affiliates of Vornado Realty Trust – will try to sell themselves out of of bankruptcy, or will repay creditors with reorganized equity, they disclosed in court papers (The case is Times Square JV LLC, 22-11715,U.S. Bankruptcy Court for the Southern District of New York).

The building, located at 1601 Broadway, has struggled for years under a “burdensome” licensing deal with InterContinental Hotels Group for use of its Crowne Plaza brand and on a complex ownership structure; additionally Covid-19 forced the hotel to close until November of this year, court papers stated,

According to TRD, Andrew Penson’s Argent Ventures wants to reorganize the finances of the hotel, having gained control of the 46-story tower in the heart of Times Square by vanquishing office giant SL Green in court and replacing Vornado Realty Trust.  Penson had “elbowed his way” into the marquee property by buying the mezzanine debt on which Vornado had defaulted at a steep discount.

The total debt is $526 million and covers the 795-room hotel, 196,300 square feet of office space and 17,800 square feet of retail, according to bankruptcy filings. Almost all of that, or $519 million, is owed to senior and mezzanine lenders. Some $418 million in senior debt has been delinquent since April 2020, or nearly three years.

The hotel, which occupies floors 15 through 46, closed in March 2020 when Covid arrived. It only reopened last month, way to late to save the financials. While tourism to New York City has rebounded substantially, the pandemic’s effects linger in the hospitality industry, which still employs fewer people than it did in 2019.

Meanwhile, as part of the “work from home” office crisis, some 88,000 square feet, or 45% , of the office space at 1601 Broadway remains vacant. The hotel paid $7.5 million in severance to laid-off hotel workers, plus another $5.2 million in severance — required by an 11th-hour de Blasio administration law — which Argent, Vornado and hotel operator Highgate Hotels agreed to divide evenly.

“Portions of the Debtors’ Signage Component have remained vacant for months and others continue to display advertisements for parties that are not paying monthly rent,” Richard J. Shinder, president of the bankrupt entities, said in court papers.

In its bankruptcy filing, Argent said “the operating costs associated with servicing meeting spaces and providing food and beverage exceeded the revenues from such activities.” It added that “the complex ownership arrangements of the land underlying the premises (namely the Walber fee parcel and the Riese fee parcel) also created uncertainty and financial strain.”

The legal battle with SL Green was “expensive, time consuming and made it difficult, if not impossible, to reopen the hotel,” the bankruptcy filing said.

Argent bought the final fee parcel beneath the hotel on Wednesday. Vornado, the ultimate equity owner of the property, did not immediately return a request for comment.

Office tenants at 1601 Broadway include the Association for Computing Machinery, American Management Association and Open Jar Studios, with monthly rent totaling about $500,000. Retail rents, including Krispy Kreme’s, total about $635,000 per month.