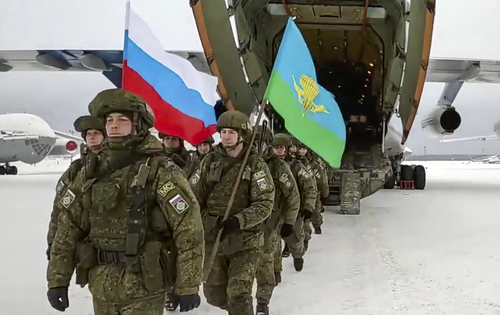 The Kremlin has clarified its position on being ‘open’ to peace negotiations with Ukraine, after over the weekend Ukraine’s leadership floated a proposal to enter into UN-brokered ceasefire negotiations in February.

“There can be no peace plan for Ukraine that does not take into account today’s realities regarding Russian territory, with the entry of four regions into Russia. Plans that do not take these realities into account cannot be peaceful,” Peskov said.

Last week the Kremlin stated something similar, according to The Associated Press:

…no Ukrainian peace plan can succeed without taking into account “the realities of today that can’t be ignored” — a reference to Moscow’s demand that Ukraine recognize Russia’s sovereignty over the Crimean Peninsula, which was annexed in 2014, as well as other territorial gains.

Ukraine’s position has been to denounce the “sham” referendums Russia held in Kherson, Zaporizhzhia, and the breakaway Donbas republics of Donetsk and Luhansk (DPR and LPR), while vowing its forces will not stop fighting until every inch of Ukraine is “liberated”.

President Zelensky has even in the recent past said that Crimea must be returned from Russian control as well, and there’s been a handful of Ukrainian attacks on the Russian-held peninsula.

Both sides at this point see in the other’s position unrealistic demands. The Kremlin, for example, sees as a completely unserious non-starter the latest Ukraine assertion that the proposed February talks can only happen if Moscow agrees to a “war crimes tribunal” for its officials. This position will only become even more entrenched after Thursday’s massive Russian missile attack across Ukraine, reaching as far West as Lviv…

⚡️British Ambassador to Kyiv: The Russian attack on Ukraine today confirms that Moscow wants to subjugate Kyiv, not peace

In addition to dismissing this “war crimes court” demand, the Russian foreign ministry has pointed to the greatly ramped up supply of weapons from Western countries, especially from the United States, which has derailed any legitimate move toward peaceful negotiations.

Fresh analysis in The New York Times says that at this point each side is still seeking a military solution, remaining hardened in their positions:

As the battle for Ukraine turns into a bloody, mile-by-mile fight in numbing cold, Ukrainian and Russian officials have insisted that they are willing to discuss making peace.

But with a drumbeat of statements in recent days making clear that each side’s demands are flatly unacceptable to the other, there appears to be little hope for serious negotiations in the near future.

The Times then quotes the following analyst:

“This suggests there is not necessarily a push for a negotiated peace or even some sort of negotiations, but still a push for whatever endgame is being sought militarily,” said Marnie Howlett, a lecturer in Russian and Eastern European politics at the University of Oxford.

Lavrov this week said all of Russia’s objectives must be met… “Otherwise,” he said, “the Russian Army will deal with this issue.”

Interestingly, no less than former US Secretary of State Henry Kissinger penned an op-ed this month wherein he called for Ukraine and the West to get serious about territorial concessions in order for the war to end, with the ‘alternative’ being a continued spiral toward nuclear-armed direct confrontation between the US-NATO and Russia.