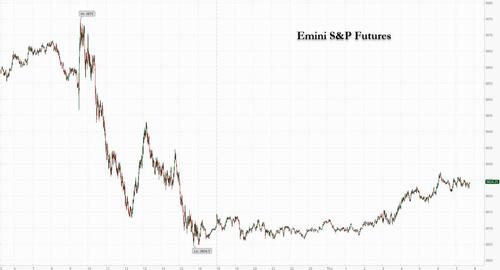 US index futures rebounded on Thursday from another painful selloff the day earlier, as technology shares rallied on the second to last trading day of what’s been a brutal year for financial markets, even as growing concerns over a surge in China’s Covid cases snuffed optimism over the nation’s reopening of its border. At 7:45am S&P futures traded 0.4% higher to 3,823 while Nasdaq 100 futures rose 0.6% to 10,837 following gains for Asian tech stocks earlier amid signs China is easing a regulatory crackdown. Treasuries were steady and the Bloomberg dollar index declined.

In premarket trading, Tesla climbed more than 3% in, with tech giants including Amazon.com Inc. and Netflix Inc. also among the biggest gainers. Tesla rose after Morgan Stanley analyst Adam Jonas said a de-rating in the electric vehicle company’s stock has created an opportunity, and even though Jonas lowered his price target to $250 from $330, he stuck to an overweight rating. Among other EV stocks: Rivian Automotive +2.6%, Lucid Group +2.8%, Hyzon Motors +6.4%, Cenntro Electric Group +8.1%, Mullen Automotive +7.8%. Jonas wrote that his new target reflects “lower pricing and lower valuation of adjacent businesses;” and expects 2023 will be “a ‘reset’ year for the EV market, where the last 2 years of demand exceeding supply will be substantially inverted to supply exceeding demand.”

And speaking of Tesla a quick look at yesterday’s record, blowout put-to-call ratio suggests that much of the recent plunge in TSLA stock may have been due to a surge in 0DTE put buying on TSLA which has helped send the stock tumbling in an illiquid environment as the negative gamma forced dealers to short the stock the more it slumped.

Here are some other notable premarket movers:

Getaround rises 3.3% as the stock was initiated with an overweight rating and $1.50 PT at Piper Sandler, with the broker saying the platform looks well-positioned to provide its peer- to-peer car-sharing marketplace.
Gaotu Techedu falls 4.6% in US premarket trading after China said it will tighten oversight of private tutors that offer non-curricular services to primary and middle school students, including rules on fee charges and operating time.
Keep an eye on Skechers shares after it was started with a neutral rating and $42 PT at Piper Sandler, which says the opportunities and challenges the footwear firm faces look balanced and mean its current valuation is fair.

Global equities have lost a fifth of their value in 2022, almost $20 trillion in market cap, the largest decline since 2008 on an annual basis, and an index of global bonds has slumped 16% amid sticky inflation and rising interest rates.

Thursday’s tech rally was a small ray of light as the year draws to a close with investors again focused on risks arising from the the spread of Covid-19. The US said it would require inbound airline passengers from China to show a negative Covid-19 test prior to entry. In Italy, health officials said they would test arrivals from China after almost half of passengers on two flights from China to Milan were found to have the virus.

Amid fears that China’s aggressive, accelerated reopening may lead to another global wave of covid infections, China’s CDC top epidemiologist Wu Zunyou said that covid outbreaks have peaked in Beijing, Tianjin and Chengdu, though the situation in Shanghai, Chongqing, Anhui, Hubei and Hunan remains serious. He added that the virus is still spreading fast in Henan, Jilin and Fujian provinces, and warned of the disease spreading during Lunar New Year, with many expected to travel around the holiday. Separately, Liang Wannian, China’s senior official overseeing epidemic response, says the country is strengthening the monitoring of the Covid variant and will report to the World Health Organization if it discovers any new variant.

Hong Kong removed limits on gatherings and testing for travelers in a further unwinding of its last major Covid rules, offering a boost to the global economy but sparking concerns it would amplify inflation pressures and prompt US policy makers to maintain tight monetary settings.

“Investors are going into 2023 with a cautious mindset, prepared for more rate hikes, and expecting recessions around the globe.” said Craig Erlam, a senior market analyst at Oanda Europe Ltd. “And then there’s China and its u-turn on Covid prevention. It’s been quite the shift from fighting every case to living with the virus and that creates enormous uncertainty for the start of the year.”

Going back to markets, the Stoxx Europe 600 index erased losses to trade little changed, with gains for technology stocks offsetting declines for retail and consumer-focused shares. The Stoxx 600 index was flat after erasing a drop of 0.6%. The gauge, which is down 12% this year, posted declines earlier in the session, as US and Italy joined an increasing number of nations requiring Covid tests for travelers from China. European airline stocks dropped on, leading the Stoxx 600 Travel & Leisure Index lower, amid concerns over the spread of Covid-19 from China. Long-haul carriers Deutsche Lufthansa -4.1%, IAG -1.7%, Air France-KLM -1.3%.

Investors are worried about any potential emergence of a new variant of the virus which might bring restrictions back onto the table and “hammer growth,” Ipek Ozkardeskaya, senior analyst at Swissquote Bank.

Earlier in the session, Asian stocks declined, heading for their worst annual loss since the 2008 financial crisis, as growing concerns over a surge in China’s Covid cases snuffed optimism over the nation’s reopening of its border.  The MSCI Asia Pacific Index dropped as much as 1.1%, pushing its annual slump to about 20% in the final trading week of 2022. Tech stocks including Alibaba and Samsung Electronics were among the biggest individual drags on the benchmark. South Korea’s Kospi was the worst performer with a near 2% slump, while gauges in Hong Kong also underperformed.

“Investors are starting to pay more attention to the spreading virus given that the pandemic could set back the pace of economic recovery in 2023,” said Jun Rong Yeap, a market strategist at IG Asia. “Investors may have prematurely priced in that the worst was over.”  Tencent, Asia’s biggest social media and gaming company, was the best performer on the Hang Seng Tech Index after China approved its new game titles in the latest sign Beijing is easing up crackdowns on the sector.

Japanese stocks declined for a second day, following US peers lower as investors continued to worry about the spread of Covid-19 on China’s reopening. The Topix Index fell 0.7% to 1,895.27 as of 3 p.m. Tokyo time, while the Nikkei declined 0.9% to 26,093.67. Out of 2,162 stocks in the index, 1,231 rose and 833 fell, while 98 were unchanged. “The rise in Covid-19 infections in China could cause supply chain problems in the short term, which could lead to inflationary concerns,” said Tomo Kinoshita, a global market strategist at Invesco Asset Management. “Japanese stocks declined less than the US or Europe as China’s reopening has some positive effects on Japanese companies that are exporters.”

In FX, the US dollar fell against most Group-of-10 currencies while Treasuries rallied as investors monitored the spread of Covid-19 within and from China. The Japanese yen bounced after two days of losses. US employment data in focus later. The yen led Group-of-10 currency gains after performing the worst on Tuesday and Wednesday. USD/JPY fell as much as 0.7% to 133.47, the biggest drop in more than a week. Swiss franc is the other outperformer amid concern over the spread of coronavirus, with the US and Italy among countries requiring Covid tests for travelers from China. The Bloomberg Dollar Spot Index declined 0.3%, with the greenback only higher against some risk-sensitive currencies including the Australian dollar and Norway’s krone. Traders will be watching data on US initial jobless claims later Thursday for more clues on the Federal Reserve’s policy path.

In rates, Treasury yields were mixed in early US trading with the curve modestly flatter as the short end cheapens by ~1bp. The 10-year TSY is lower by 1bp at 3.873%, but remains near the highest since mid-November and just above 50-DMA level; most euro-zone 10-year yields are higher ~1.5bp on the day; UK yields are leading the way higher with 10-year up 4bps. Treasury market was firmer overnight until a selloff in UK gilts dented global bond market sentiment. Final coupon auction cycle of the year concludes with $35b 7-year note sale at 1pm New York time; Wednesday’s 5-year saw a modest tail, after cheapening from session highs.

Elsewhere in markets, oil dipped amid thin liquidity as investors weighed the fallout from a Russian ban on exports to buyers that adhere to a price cap.

The US and Italy joined an increasing number of nations requiring Covid tests for travelers from China, with concerns mounting over the risk of any new variants emerging from the surge in infections in the country of 1.4 billion
Covid outbreaks have peaked in Beijing, Tianjin and Chengdu, though the situation in Shanghai, Chongqing, Anhui, Hubei and Hunan remains serious, China’s CDC top epidemiologist Wu Zunyou says in a briefing
Russian Foreign Minister Sergei Lavrov said Moscow won’t enter into negotiations with Ukraine to end the war, even after suffering a series of battlefield setbacks
Goldman Sachs Group Inc. is working on a fresh round of job cuts that will be unveiled in a matter of weeks, Chief Executive Officer David Solomon said in his traditional year-end message to staff
The Bank of Japan announced two additional rounds of unscheduled bond-purchase operations, fighting back against traders betting it will further relax its yield-curve control policy