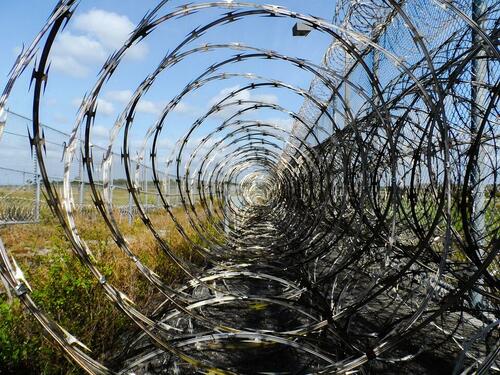 Funny What Even A Flimsy Border Fence Can Do…

Authored by Monica Showalter via AmericanThinker.com,

Well, here we have it.

This morning, service members deployed to El Paso, Texas constructed a triple-strand concertina barrier near the border to secure the area from illegal crossings. pic.twitter.com/X6JUkr9iQV

At a time when Joe Biden and his trusty sidekick, Homeland Security secretary  Alejandro Mayorkas, claim there’s nothing they can do about the border surge as they wave illegal aliens through, illegal border crossings in the El Paso area have … gone to almost zero.

According to Border Report:

EL PASO, Texas (Border Report) – Migrant crossings have plummeted in a mile-long stretch of Downtown El Paso where the Texas Army National Guard has set up concertina wire and portable fencing along the Rio Grande.

The guard began setting up the barrier last week at a gap in the border wall west of the Paso del Norte port of entry. In the space of eight days, the barbed wire has nearly reached a second port of entry and chain-link fence anchored by sandbags extends even farther. The result is that asylum seekers can no longer walk across ankle-deep water in the Rio Grande and turn themselves in to waiting Border Patrol agents in that area.

“The difference is vast,” said 1st Sgt. Suzanne Ringle. “The 19th, the 20th and the 21st we had large groups of families and individuals who were wanting to come across. Now, it’s almost a ghost town out there.”

She attributed that to the “visual deterrent” of the barbwire, parked Humvees and soldiers patrolling the area with their semi-automatic rifles. As of Tuesday, 600 guard members were in El Paso on border security duty associated with Texas Gov. Greg Abbott’s Operation Lone Star.

So that’s all it takes?

It makes sense that it does.

Put a fence up, even an ugly, flimsy one, redolent of a communist regime, complete with a few guys with guns and patrol cars out there and they won’t come.

So much for all the arguments that “walls don’t work” because migrants will find ways to scale,catapult, or tunnel under the walls. Yes, there are a few cases of this, but the big mass surges suddenly end.

There have been arguments that big, high-tech, and impressive walls are what it takes, but these ideas have been thwarted by open-borders leftists, screaming about wildlife and illegal alien “rights.” President Trump’s border wall was largely thwarted that way, and Arizona’s effort to set up stacked boxcars as an impenetrable wall met their fates this way, too.

But barbed wire and chain link fences work, too, a hell of a lot better than a naked, open, inviting border space, sometimes with only a puddly river to cross. It’s makeshift and it’s ugly, sure, but the obstructions of open-border leftists and their leftwing lawyers and roundheel judges are why we can’t have nice things. So now we get crappy, unsightly things, like razor-wire rolls and chain link fences, along with a few guards with guns and it works just as well.

The left has had a grand old time running circles around the larger, and more permanent fencing projects, but it’s a lot harder for them to challenge tiny, temporary, barriers and make an issue of them.

The success of this old and tried border solution raises questions as to why this wasn’t done earlier, back when President Trump was trying to get his wall built. Hindsight, of course, is easy for us now, but it’s sad that this idea didn’t come up earlier, even as a temporary solution while the bigger battles over the wall construction were going on. While Trump was valiantly battling leftists in the courts over his wall’s construction and funding, the barbed wire fence solution sat right there, seemingly unused. The barbed wire fence apparently could have been dragged through national parks, national wildlife refuges, and perhaps even private lands, with minimal disruption and no big symbolic images such as the border wall for the left to rally round in outrage. Those were some of the obstacles he endured in his battle to get the border wall built.

A lousy barbed wire fence worked just as well, and could be thrown up quickly, cheaply, and with immediate effects, all of which was in the thinking of that master-problem-solver, Texas Gov. Greg Abbott, who deserves kudos for this simple and effective idea. Abbott has a lot of those.

It works because I know it works.

I’ll share a personal story: My mother has an ambitious kitten whose great goal is to romp around in the canyon behind her house, which is filled with packs of hungry, pet-eating, coyotes. City officials do nothing about the problem and the den is proliferating. Once in awhile, I hear a gun go off at night and with no cops called, it’s almost certainly someone taking out a coyote and everyone else in the neighborhood just keeping quiet. Since kittens don’t belong in canyons, I found that the solution for her issue is to block the hell out of the flimsy fence she has, with flower pots, old boards, dirt, nearby jumping points, anything that will keep the kitten inside his yard and out of the canyon. Rather than wait for a coyote to come, the blocked fence is the one thing that keeps the kitten inside. Focus on the fence openings, I’ve told her, not on taking the kitten back to the shelter, as she frets every time the kitten gets out. We are still working on the fence openings, but when a known one is blocked off, the kitten stays in. When he discovers another, it’s back to the drawing board, but one day, we will have the entire fence turned into a kitten-coyote barrier. We will get there.

So will the people of Texas, with guys like Gov. Abbott around.

The lesson here is that even a bad fence works wonders to deter the tens of thousands of unvetted illegal aliens from crossing in, so let’s see more of them.