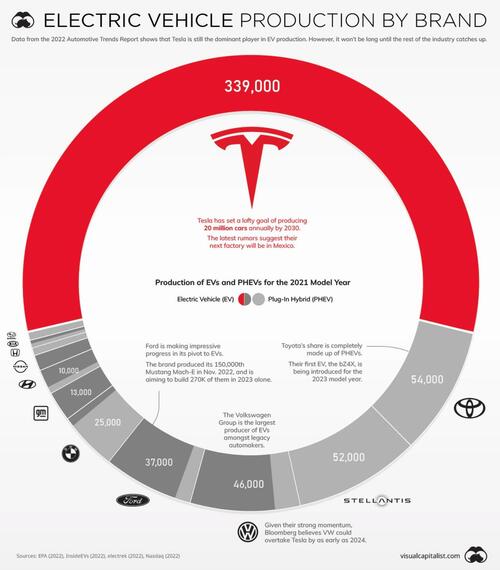 Visualizing EV Production In The US By Brand

How long will Tesla hold onto its dominant electric vehicle (EV) market share?

This is one of the biggest questions facing the U.S. automotive industry. On one hand, Tesla has a very strong brand and loyal customer base (similar to Apple). The company also has a headstart in EV production and spends more on R&D per car than its competitors.

On the other hand, legacy automakers such as Volkswagen are eager to overtake Tesla. As the incumbents, they have decades more experience in building cars and are investing billions of dollars to catch up.

To keep you up to date on this evolving story, Visual Capitalist’s Marcus Lu uses data from the EPA’s 2022 Automotive Trends Report. in the following infographic:

Although it comes from a 2022 report, the comprehensive production data used in this infographic is for the 2021 model year.

The table below breaks out total production by EV and PHEV (plug-in hybrid electric vehicle).

*Rounded to nearest 1,000. Numbers may not add up due to rounding. Includes top 14 manufacturers with U.S. footprint

Toyota and Stellantis are the two biggest legacy automakers in this dataset, though it’s worth pointing out that they only produced PHEVs. Toyota’s first EV, the bZ4X, isn’t slated for release until 2023.

Stellantis appears to be even further behind, though the company has plenty of untapped potential with brands like Jeep and Ram. In a recent interview, Stellantis CEO Carlos Tavares revealed that the company has set aside $36 billion for electrification and software.

Legacy Brands with the Most Momentum

When it comes to building EVs, some legacy brands have moved quicker than others.

Among these legacy brands is Volkswagen, which has made a major commitment to EVs in the fallout of its Dieselgate scandal. The group aims to produce 22 million EVs by 2028, and is rolling out various models including the ID.3 hatchback, the ID.4 SUV, and the ID. Buzz (an electric revival of the classic Microbus).