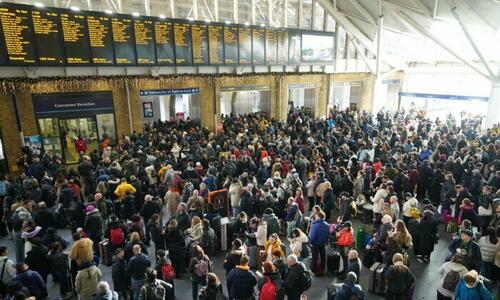 Authored by Alexander Zhang via The Epoch Times,

British rail passengers have been warned to prepare for “significantly disrupted” travel into the New Year amid a wave of industrial unrest sweeping across the country.

The Network Rail, which owns and maintains the railway infrastructure in England, Scotland, and Wales, has urged people to plan ahead and check before they depart as “industrial action means rail travel will be significantly disrupted throughout December and January.”

The warning came as members of the Transport Salaried Staffs’ Association (TSSA) at train operator CrossCountry staged a 24-hour strike from 9 p.m. on Boxing Day as part of a long-running campaign for a guarantee of no compulsory redundancies, no un-agreed changes to terms and conditions, and a pay increase addressing the rising cost of living.

Meanwhile, a strike called by the Rail, Maritime and Transport union (RMT) in a separate dispute continued to cause disruptions even after it officially ended at 6 a.m. on Tuesday.

A spokesman for the UK government’s Department for Transport said: “After two years of virtual Christmases, the British public deserve better than to have their festive celebrations impacted by strikes.

“The transport secretary and rail minister have worked hard to facilitate a fair and reasonable offer, which two unions have accepted, and it is incredibly disappointing that some continue to strike.

“We urge them to step back, reconsider and get back round the table, so we can start 2023 by ending this damaging dispute.”

The 48-hour strike called by the RMT in a dispute over jobs, pay, and conditions began on Christmas Eve and ended at 6 a.m. on Tuesday.

But disruptions lasted well into the afternoon, as crowds of people were left waiting at major train stations across London and beyond.

Photos showed hundreds of passengers packed inside London’s King’s Cross and Paddington stations, with some journeys delayed due to the late handover of engineering works.

South Western Railway also apologised to customers after a service from Waterloo to Southampton was postponed due to a “train fault.”

Travel journalist Simon Calder said there was “chaos” at Paddington, with no trains having arrived or departed by 10 a.m. despite industrial action having ended hours earlier.

“Services have been generally OK but we did have some disruption this morning at Paddington because of the late handover of some engineering works,” a Network Rail spokesperson said.

The TSSA union believes that walkouts by staff will severely affect services at CrossCountry, which covers large swathes of the country.

Earlier, the union’s organising director, Nadine Rae, said: “Our members at CrossCountry do not want to strike, especially over the Christmas holiday period, but they are sick and tired of being taken for granted.

“They deserve a pay rise to help manage the escalating cost of living, and they rightly demand job security.

“The company, like all the train operators under the control of the Department for Transport, need to face up to the fact that only serious offers which meet our aspirations will end this dispute.”

The UK has faced widespread disruptions with industrial action hitting multiple sectors during the festive season.

Around 1,000 members of the Public and Commercial Services (PCS) union employed by the Home Office to operate passport booths are on strike at Heathrow, Birmingham, Cardiff, Gatwick, Glasgow, and Manchester airports, went on strike on Boxing Day and will walk out again from Wednesday to Saturday.

Military personnel have been deployed at the ports to check passports during the Border Force strikes.

PCS general secretary Mark Serwotka threatened to escalate the industrial action unless the government comes forward with an improved pay offer, saying that the airport disruptions could last for months.

Last week, the National Health Service (NHS) was hit by two days of strikes, with thousands of nurses walking out on Dec. 20 and ambulance workers joining picket lines on Dec. 21.

The Royal College of Nursing (RCN) has already announced two more days of industrial action in England on Jan. 18 and 19.

Prime Minister Rishi Sunak said on Dec. 23 that he was “sad” and “disappointed” about widespread disruptions caused by strikes, but continued to refuse to negotiate on public sector pay.

“I am really sad and I am disappointed about the disruption that is being caused to so many people’s lives, particularly at Christmas time,” he said.

“When it comes to the difficult question of setting public pay, the government has acted fairly and reasonably in accepting all the recommendations of the public sector pay review bodies,” he added.

“We all know the major economic challenge we all face now is inflation, it’s inflation eating into everyone’s pay packets,” he said, adding, “I want to make sure we reduce inflation, part of that is being responsible when it comes to setting public sector pay. That’s why we have an independent process.”